Inversion of uterus is a rare condition that usually occurs in early postpartum period.  Here we are presenting an image of a large prolapsed cervical leiomyoma that was referred as a case of  sub acute uterine inversion. Sub mucosal pedunculated cervical myoma may protrude from the vagina but sessile myoma that prolapses out of the introitus can pose a diagnostic and management challenge.

A 32 year married, tribal, G5P5L4NND1 was referred with the presumptive diagnosis of uterine inversion on day 6 of preterm vaginal delivery. She had a prolapsed huge mass, lying outside the  vagina and acute renal failure. She delivered a preterm, singleton, female, neonate who died immediately after birth. Delivery was conducted by Traditional Birth Attendant (TBA). The childbirth was preceded by the expulsion of this large mass.  Soon after childbirth she developed anuria. She was transferred to the District hospital from where she was sent to our tertiary care center with a serum creatinine of 5.7 mg% and suspected uterine inversion. Urine output was only 50cc in the preceding 24 hours.  On arrival, patient was stable, general and systemic examinations were in the  normal range.  Uterus was not palpable on abdominal examination.  A solid,  inflamed, ulcerated, fleshy, non repositable mass with blackish discoloration of around 13x7 cm  was seen outside the introitus.  Ultrasonography showed bilateral hydroureter and hydronephrosis. Serological, and biochemical investigations were as follows: Hb 8.2 gm/dl, serum creatinine 7.4 mg/dl, BUN 49.2 mg/dl and serum K+ 5.3 meq/l.  Nephrologist performed hemodialysis. Two units of blood were transfused.  Parenteral antibiotics were started. After hemodialysis serum creatinine and potassium were 5.5 mg%  and 3.9 meq/ liter respectively. Under general anesthesia, with careful and minute observation, the anterior lip of the cervix that was fully effaced, discolored, stretched obliquely, was found. The entire mass was seen to be arising from the posterior lip of the cervix. It was sessile. A vaginal myomectomy was done by taking a transverse incision on the posterior part of the myoma. The myoma of size about 12x10 cm was enucleated from its pseudocapsule. It weighed around 900 gm. 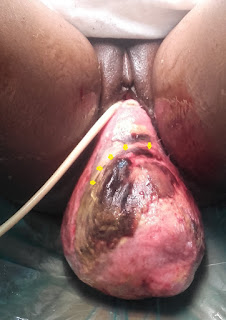 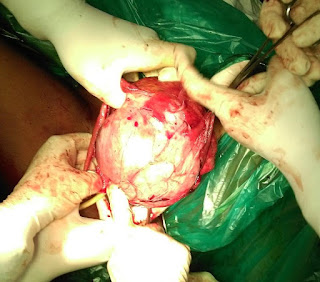 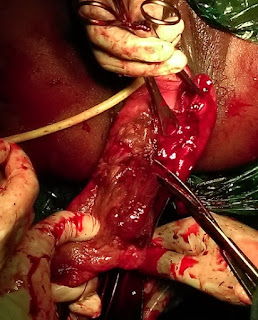 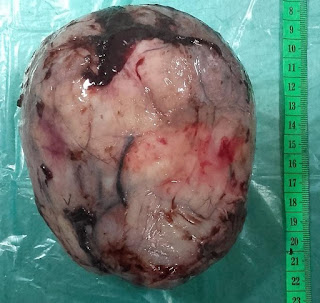 Myomectomy was followed by immediate drainage of 100 ml of urine.  Myoma bed was trimmed but the dimension of the posterior lip of the cervix was around 11 x 6 x 3 cm and as it was not possible to amputate the cervix, reconstruct it and keep it reposited in its anatomical position. Presence of the necrotic tissue and risk of septicemia resulting from leaving behind the raw, long cervix was also real. An abdominal hysterectomy to which the patient had consented previously was done. Two units blood and four units fresh frozen plasma were transfused. End surgery urine output was 500 ml. Her serum creatinine serially dropped from 5.5 mg % to 3.9 mg% on day 1 to 1.2 mg% on day 2 to 1 mg% on day 3 and serum potassium serially dropped from  5.3 meq/l to 4.3 meq/l  to 3.1meq/l on day four. Her renal function returned to normal by postoperative day 4 with creatinine value of 0.9 mg%. On histopatholgy report uterus measured 16x10x8 cm, corpus was 11 cm, cervix measured 5 cm, fibroid measured 9.5 cm. Posterior lip of the cervix 11x6x3 cm showed necrotic tissue, inflammatory infiltrates predominantly polymorphs. Endometrial cavity was lined by necrotic material.

Puerperal uterine inversion, an obstetric catastrophe is most commonly acute in nature.[1]   Cervical fibroid is a differential diagnosis of a non-puerperal inversion in a gynecological patient, and usually leads to confusion in diagnosis.[2] Our patient had no history of neurogenic shock which is  usually present in inversion but not with prolapsed fibroids. Renal failure  due to obstructive nature of fibroids, occurs but is usually not acute in nature. It does not occur with uterine inversion as the ureters do not get compressed in the tight cervical ring.  She developed acute retention because the fibroid weighing 900 gm gave traction to the uterus and dragged it down to compress the ureters by the uterine vessels resulting in back pressure changes and hyroureter and hydronephrosis. Prompt surgery relieved this back pressure on the ureters and prevented permanent renal parenchymal damage. The dramatic nature in which urine drained immediately after removal of the fibroid, suggests the acute nature of the obstruction.[3]  Peripartum obstetric hysterectomy is commonly done for uterine atony and adherent placenta.[4] The occurrence of a peripartum hysterectomy for a prolapsed huge cervical fibroid post delivery is a rarity.
Even the best of clinical presentations may not be as they appear. It is advisable that the clinician is alert to other differentials and use various imaging methods to confirm the diagnosis. A thorough examination under anesthesia also aids diagnosis, treatment planning and patient counseling.