Abstract
Polyps are benign growths from the endometrial cavity or the cervix and are a common cause of abnormal uterine bleeding (AUB). The cervical polyps can be asymptomatic or a cause of intermittent spotting and/or leucorrhea. Endometrial polyps are found to be responsible for AUB in many patients. We report a case of a huge endometrial fibroid polyp in a 25 year old patient with complaints of polymenorrhagia and its removal by vaginal myomectomy.

A 25 year old, para 1 living 1, MTP 1 first presented to the outpatient clinic with complaints of spotting per vaginum and pain in abdomen. On clinical examination, a 2-3 cm tender mass was felt in the left fornix with bilateral forniceal tenderness was found. The patient was admitted to rule out ectopic pregnancy. Ectopic pregnancy was ruled out by a negative pregnancy test on urine and ultrasonography (USG). On USG, a polyp or a submucosal fibroid arising from the left lateral wall of the uterus was found. The patient was treated for pelvic inflammatory disease and discharged. On her second visit to the OPD for follow up after 2 months, clinical examination showed a ballooned out cervix with a thickened and congested anterior lip. But the polyp was not visible. Uterus was normal size. The patient followed up in the OPD with complaints of polymenorrhgia and abdominal pain after 5 months with a USG report showing a large endometrial polyp occupying almost all of the endometrial cavity and cervix. On per speculum examination revealed a 3 cm infected mass protruding into the vagina from the os. The uterus was of normal size above the polyp. The patient was admitted for polypectomy after correction of anemia. Her general and systemic examination and investigations for fitness for anesthesia revealed no abnormality.
The patient was taken for polypectomy under spinal anaesthesia in lithotomy postion. On EUA, cervical rim was felt around the fibroid polyp and the polyp was protruding out from the os in the vagina. The attachment of the fibroid polyp could not be appreciated well since it was likely high up near the fundus. After holding the anterior cervical lip with Allis forceps, traction to the mass was applied with vulsellum. A loop made of infant feeding tube was passed around the polyp to attempt avulsion but the base of the polyp was found to be 2 cm in diameter. A small transverse incision was then taken on the anterior surface of the fibroid polyp and after careful sharp dissection a plane was created to enucleate the mass. The mass was avascular and the part protruding out of the os got detached during surgery. On examination, the attachment of the mass was found to be on the right lateral wall of the uterus near the cornu. On careful sharp dissection with stout scissors and simultaneously maintaining continuos traction on the mass, the mass was separated from the endometrial cavity and removed. It measured 9x4.5 cm The cavity was observed for any signs of active bleeding. The cervix appeared to be effaced due to the pressure effect of the fibroid polyp. No active bleeding was found. The uterine cavity was prophylactically packed with feracrylum soaked roller gauze. Postoperatively, there was no active bleeding and the roller gauze packing was removed after about 6-8 hours. The patient made an uneventful recovery. Histopathological examination confirmed the diagnosis of a leiomyomatous polyp. 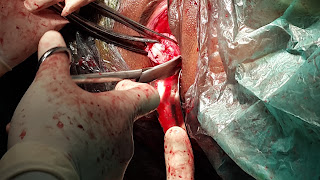 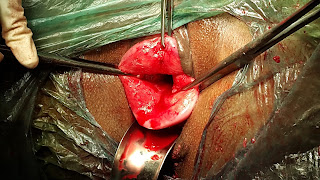 Figure 2. Appearance of the cervix after removal. 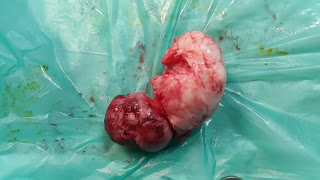 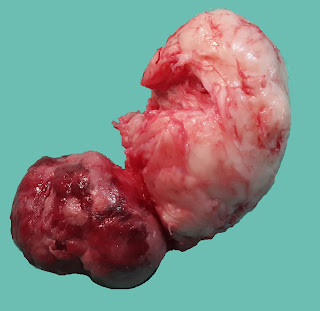 Figure 3. Appearance of the polyp after removal.

The above case is of a submucous leiomyomatous polyp protruding from the os. The striking feature of this case is the speedy and rapid growth of the fibroid polyp within a span of 7-8 months. On histopathology, there was no evidence of malignancy. Also the widest dimension of the lesion was still inside the endometrial cavity and only a part of it was protruding from the os. Passage of the widest transverse diameter through the cervix is considered to be a prerequisite for polypectomy.[2] If not, a posterior or an anterior cervicotomy is required before the polyp can be removed. But in this case, since the widest portion of the polyp was inside the cavity, the size of the polyp was initially underestimated. This was realized during the procedure.
Barbot reported that functional and non-functional polyps resulted in abnormal uterine bleeding.[3] Functional polyps are usually smaller than the non-functioning polyps and are readily diagnosed on hysteroscopy. The lining of the functional polyp is similar to that of the endometrium. While a non-functioning polyp appears as a white protuberance with branching surface vessels. Hysteroscopic removal is the method of choice for removal of these polyps. Non-functioning polyps can be confused with submucous myomas which have a similar gross appearance.[4] In the past, hysterectomy was recommended if a diagnosis of submucous myoma was made. But now with the development of hysteroscopic resection techniques, management of submucous myomas has become less radical. In the case presented, hysteroscopic resection was not considered because the cervix was open and uterine distension could not have been achieved for hysteroscopy.
The above case posed a challenge to the operating surgeon since the removal of the mass following sharp dissection was a relatively a blind procedure. In such cases, the surgeon needs to be mentally prepared to proceed for hysterectomy if there is accidental injury to the uterine wall opening into the peritoneal cavity or the bleeding after removal of the fibroid polyp does not stop despite uterine packing.