Twenty two years old primigravida registered antenatally at 24 weeks gestation and had a routine course in pregnancy. She was 5 feet and 3 inches, weighing 58 kg, well developed and well nourished. Her general examination, per abdominal examination and routine antenatal investigations were unremarkable. At 37 weeks gestation, vaginal examination was done which revealed normal external genitalia, a blind vaginal pouch of good caliber and depth with a dimple at its apex; cervix was not visualized. On direct questioning, patient revealed late menarche at the age of 17 years after some surgery, probably drainage of hematocolpos and hematometra. She subsequently had regular menstrual cycles and no sexual dysfunction or dyspareunia.
She was examined under anesthesia and findings of blind pouch of good caliber and a dimple at its apex and non – visualization of cervix were confirmed. A provisional diagnosis of transverse vaginal septum was made as previous antenatal scans in first and second trimester showed a normal cervix.
Ultrasonography showed normal cervix and vagina; MRI showed a linear isointensity extending antero-posteriorly at the level of mid vagina which divides hyperintense vaginal mucosa into two parts representing a transverse vaginal septum. There were no associated renal anomalies. 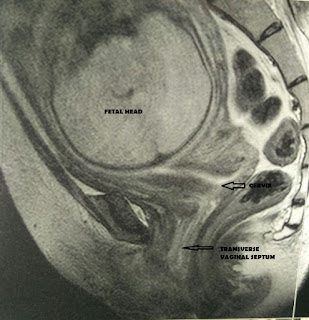 Figure 1.  T1-weighted MRI image showing transverse vaginal septum.
She underwent elective cesarean section at 39 weeks of gestation and delivered a female child of 2.9 kg. After expulsion of placenta and membranes, uterus was examined; there was no associated uterine anomaly. Metallic Hegar dilator No. 6 was inserted through the cervical canal which was well formed and normal, with simultaneous per vaginal examination. However the dilator could not be felt vaginally as there was a thin layer of intervening tissue. After cesarean section, patient was examined in lithotomy position. Local examination revealed bulging of the transverse vaginal septum with blood flowing as a jet through a pinpoint opening. Urethral opening was normal. When gentle pressure was applied on the septum, blood clots started to come out; the pinpoint opening was enlarged to approximately 2 – 3 cm using artery forceps. A finger could easily be inserted through this opening and the cervix was now felt at a distance of 4- 5 cm from the septum. Postpartum course of the patient was uneventful with normal lochia. The mother and the baby were discharged on day 5 of the surgery and advised to follow up after 6 weeks for septum resection. 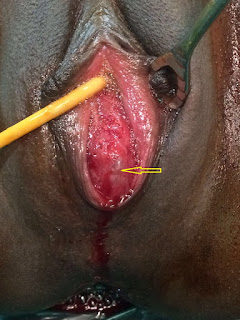 Figure 2.  Bulging out of the transverse vaginal septum, cervix is not visualized 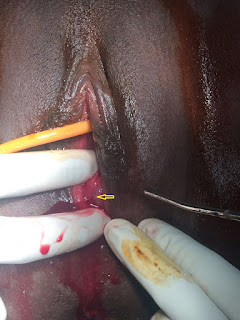 Figure 3. Arrow pointing at the jet of blood coming out through the pinpoint opening in the perforated transverse vaginal septum 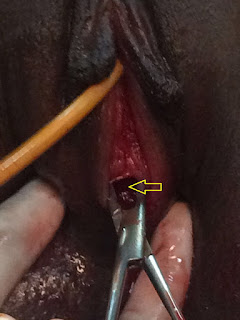 Transverse vaginal septum was first described by Delaunay in 1877.[2] Transverse vaginal septum is formed due to failure of complete canalization of primitive vaginal plate or due to lack of union of urogenital sinus and mullerian duct. The incidence varies from 1:30,000 to 1: 84,000 females. Its etiology is unknown; may result from female sex related autosomal recessive transmission.[3] It may be present in upper, middle and lower thirds of the vagina in 46%, 35%, 19 % of the patients and varies in thickness from 0.5 to 6 cm.[4,5] It may be complete or incomplete. It is composed of fibrous connective tissue and vascular muscle elements. Lower surface of the septum is always covered with squamous epithelium. It may be associated with genitourinary anomalies as the development of urinary system parallels with that of genital tract.[6]
The diagnosis of complete transverse vaginal septum is often delayed until after menarche, when patient presents with progressive cyclical pain secondary to hematocolpos. An incomplete transverse vaginal septum is usually asymptomatic as central aperture allows the vaginal secretions and menstrual blood to flow; may be found incidentally during routine antenatal checkup. Transverse vaginal septum divides the vagina into two segments and reduces its functional length. Patient may present with complaints of dyspareunia. Examination under anesthesia may be required for establishing the diagnosis. Clinical management includes renal imaging and ultrasonography and MRI. Elective cesarean section rates are higher in these patients; however, vaginal delivery is also possible in established cases of transverse vaginal septum.[7] Cruciate incision is given during labor. Surgical correction may be required depending upon the location of the septum and its thickness. Surgical correction is more difficult in high transverse vaginal septum as the septum is usually thick and dissection between bladder and rectum is required.[8] Low and mid septum are usually thin and can be excised with multiple radial incisions.