A Case Of Primary Amenorrhoea With A Rare Mullerian Anomaly

Few problems in gynecology are as challenging and taxing to the physician as amenorrhea and also those associated with Mullerian duct anomalies. Mullerian anomalies include a wide spectrum of abnormalities. They can result from dysregulation or interruption at various stages of development of the paramesonephric duct. Various classifications have been given to group these anomalies. Although the most widely accepted system is the American Fertility Society classification - 1988 (AFS) which categorizes Mullerian defects into 7 classes according to major uterine anatomic defect, it is associated with various limitations in effectively categorizing the mullerian anomalies. We present a rare case of a 25 year old female having two uterine horns, both non communicating with each other, left horn functioning and communicating to a single stenosed cervix with hematometra and right horn non functioning, not communicating to the cervix. This defect is not covered under AFS classification of mullerian anomalies but can be classified by European Society Of Human Reproduction And Embryology (ESHRE/ESGE)  and EAC classification of congenital mullerian anomalies.


Mullerian duct anomalies have been reported since 16th century and the incidence varies from 0.1 to 3.5%.[1] They are being diagnosed early over the last few decades due to better imaging modalities. Fusion of Mullerian duct occurs at around 6-11 weeks of gestation in utero and this fusion and absorption is unidirectional from caudal to cephalad end.[2] This unidirectional theory forms the basis of the current AFS classification which is the most broadly used classification till date. 90% anomalies are explained under this classification however some rare cases do not fit into this. ESHRE/ESGE classification for mullerian anomalies is also a quite complex system and does not cover complex anomalies. EAC classification has overcome these fallacies and is more comprehensive and easy to use. Mullerian anomalies have a wide spectrum of varieties and management also differs according to the defect. The case described here is a Mullerian anomaly with two uterine horns, one functioning with hematometra and communicating to the single stenosed cervix & the other horn non functioning and not communicating to the cervix. This represents failure of fusion of two uterine horns that could have lead to the formation of a bicornuate uterus. The defect cannot be classified as uterus didelphys as both the horns are attached to each other by an adhesive band and one of the uterine horn was lacking the cervix. The presence of both the fallopian tubes and ovaries excludes this case from the unicornuate variety.


A 25 year old woman married since 3 years, a case of primary amenorrhea was admitted from the outpatient department with complaints of continuous pain in the abdomen since 5 to 6 months. Patient gave history of cyclical pain in the abdomen since 17 years of age. Initially the pain was cyclical for 4 to 5 days followed by continuous pain throughout since last 5 to 6 months. There was no history of any other medical and surgical illness in the past. Her general examination was normal and secondary sexual characters were well developed. Breast development was Tanners stage 5 and pubic hair was Tanners stage 4. On general examination thyroid gland was normal. There was no stigmata like lymphadenopathy. No muculoskeletal deformities were associated. On examination abdomen was soft with no evidence of palpable lump. Per speculum examination revealed single pin point cervix and on per vaginal examination there was a right forniceal solid  mass of 3×3 cm. On the left side a mass of 3×2 cm was felt which probably was the uterus or the left horn. Clinical impression was bicornuate uterus. She had a contrast enhanced computed tomography (CECT) from a private hospital. It showed right adnexal mass of 5.2×4×3.4 cm that was solid cystic and left adnexal solid lesion suggestive of tubo-ovarian mass of 2.3×4.5×3.5 cm. Ultrasound (USG) pelvis done at our institute was suggestive of uterus 3.5x2x2 cm, hypoplastic with endometrial thickness (ET) of 1 cm with central thin hypo echoic endometrial collection within. Right ovary was 5.5x3 cm with a large heterogeneous lesion having central vascularity and few cystic areas. Left ovary of 3.4x3.1 cm had a solid lesion with similar architecture with central echogenic cystic areas, and increased vascularity. A diagnosis of hypoplastic uterus with solid ovarian tumor was given. Tumor markers were done in view of the CT scan findings. They were normal. Karyotype was done which was 46 XX. Her hormonal profile was normal. MRI pelvis was advised. MRI showed a small hypoplastic uterus of 3.7x2.1x2.2 cm with no endometrial collection. Right ovary was bulky measuring 5.5x3.6 cm with multiple tiny cystic areas showing T1 hyper-intense contents, There was no torsion of the right side pedicle seen. Left ovary was also bulky measuring 3.2x3.4 cm, showing thick wall T1W/ T2W hyper-intense cystic lesion and showed blood fluid levels with thick septations. MRI impression was hypoplastic uterus with bilateral tubo-ovarian mass. Kidneys and ureters were normal. Diagnostic laparoscopy was done in view of recurrent intractable pelvic pain.  Bicornuate uterus with both horns non-communicating, attached to each other by a thick band of adhesion was seen. Left horn was 3 3 cm and right horn was 5x4 cm. Bilateral ovaries and Fallopian tubes were normal. Dilatation of the cervix was tried but was not possible. Post procedure analgesics were given, patient was symptomatically better and was discharged.
Patient was readmitted after a month with severe abdominal pain. USG was suggestive of an increase in the size of the right horn to 6.3x2.9x4.5 cm and left horn of 6x2.8x4 cm. In view of above findings and excruciating pain, exploratory laparotomy with excision of the non communicating horn with dilatation of stenosed cervix was planned. Consent regarding the same with consent for abdominal hysterectomy if required was taken. Under anesthesia attempt was made to dilate the cervix. However the internal cervical Os could not be negotiated. Intra-operative findings were suggestive of two uterine cavities both non-communicating with a stenosed single cervix with left sided hematometra and right sided cavity non-functioning with evidence of flimsy adhesions between the two horns. Right horn was excised and pedicle sutured. From the left horn 5 cc of chocolate colored fluid was aspirated suggestive of menstrual blood. Incision was taken at the isthmus of the left horn so as to enter the endometrial cavity. Retrograde dilation of the cervix through the cavity was tried which failed suggesting cervical stenosis. Hence decision of subtotal hysterectomy was taken. Cut section of both the horns showed adenomyotic changes with chocolate colored fluid in the left horn. Patient was stable and relieved of pain in post-operative period and was discharged on 7th postoperative day. Couple was counseled regarding adoption. Histopathology report was suggestive of two horns of the uterus with severe adenomyosis with benign endometrial glands in proliferative phase. 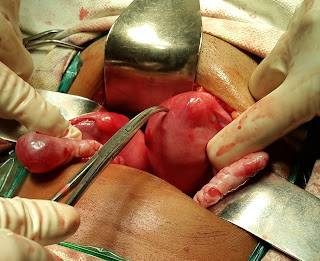 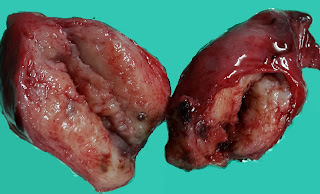 Mullerian duct anomalies have multifactorial and polygenic etiology.[3] Most widely accepted AFS classification categorizes Mullerian defects into 7 classes according to major uterine anatomic defect.[4] It is based on unidirectional theory of mullerian duct development. Mullerian duct anomalies account for 10% of the primary amenorrhea cases. Mullerian duct anomalies include a vast array of structural defects that range from complete agenesis, defective fusion, failure of canalization to failure of absorption of septum. Presentation varies from patient to patient according to the defect. These defects are mostly manifested during adolescence or early adulthood. Frequently the cases are asymptomatic and are missed during gynecological examination. Complaints of primary amenorrhea, pelvic pain following menarche, dysmenorrhea, and palpable abdominal lump bring these cases to the notice of the clinician.
Diagnostic modalities include hysterosalpingography, transvaginal ultrasonography, 3D USG which is more sensitive and equal to or better than MRI. Nowadays the gold standard is MRI.[5] Management also differs according to the type of the defect, the clinical scenario and the patient’s wish to preserve reproductive functions. The aim of operative intervention should be to retain healthy sexual life and successful reproductive outcome. However in some cases it is not possible and decisions are taken for symptomatic relief. In our case preserving the reproductive potential was not possible and hence subtotal hysterectomy was done in order to avoid morbidity, financial and psychological burden.
This case does not come under any of the seven classes of AFS system. Under ESHRE/ESGE classification it is classified as U4b/C3/V0.[6] According to EAC classification based on embryological aberrations, anatomical abnormalities and clinical features proposed in 2015 it is classified as UtL 3cm Fn Obs, UtR 4cm No Fn Obs, Cx 1cm Obs.[7]
Similar to the above case, DA Potter et al reported a case with non-communicating accessory uterine cavity.[8] M. Saleh reported a case with unilateral non-communicating cervical atresia with uterus didelphys and unilateral renal agenesis.[9] According to European Society of Human Reproduction and Embryology published in March 2015, a study conducted from 1988 to January 2014 revealed 140 cases that are not described under AFS classification.[10] This case too is not included under AFS classification but can be classified according to EAC classification. It could be suggested that more comprehensive classification like EAC classification should be used for classifying mullerian anomalies to overcome fallacies of AFS classification. Mullerian anomalies consist of a vast array of defects which vary from patient to patient and hence management must be individualized taking into account the anatomical and clinical variations as well as the patient’s wishes.