Takayasu arteritis (TKA) is a vasculitic disorder characterized by involvement of aortic arch and its branches. In pregnant patients, it is commonly associated with preeclampsia, intrauterine fetal demise (IUFD) and increased morbidity. A multigravid patient presenting with severe pre-eclampsia and IUFD, who was found to have Takayasu arteritis is reported here.

Preeclampsia presents in myriad ways. In a patient who presents in the index pregnancy with severe preeclampsia with no prior medical evaluation, a thorough initial examination is imperative, and can lead to detection of hereto unrecognized systemic disturbances.

A 30-year-old female married since 17 years G4P2L2A1, with eight months gestation presented to our emergency room with chief complaints of abdominal pain, giddiness and vomiting. She was unregistered, non-immunized, and was apparently asymptomatic till the day of presentation. Headache started in the occipital region and was throbbing in nature. There were no complaints of vaginal bleeding, convulsions or decreased urine output. There was no previous significant major medical or surgical history. She had two normal, uneventful home deliveries.
Patient was conscious and well oriented, with a pulse of 88 beats per minute, recorded in right radial artery and blood pressure of 170/110 mm Hg recorded in the right brachial artery. Pulses in left radial and brachial artery were not palpable, while other peripheral pulsations on left side, namely femoral, and dorsalis pedis were palpable. There were no ischemic changes over the left upper limb. History was reviewed and patient did not complain of any pain, claudication or weakness of the left upper limb. Neurological assessment did not reveal any abnormality. A physician was consulted and Doppler studies were advised. Cardiovascular and respiratory systems were unremarkable. On abdominal examination uterus was relaxed, 26 weeks size, and fetus in vertex presentation. Fetal heart sounds could not be heard on Doppler, and ultrasonography confirmed IUFD. Internal cervical os was closed and uneffaced. Premonitory symptoms were present in the form of headache, vomiting and epigastric pain, hence magnesium sulfate by Pritchard regimen was started.
A few hours later, patient developed a syncopal attack, from which she improved within a few minutes. Magnesium sulfate was discontinued and injectable phenytoin was started after physician consultation. Through the course of her stay in the hospital for around 6 days, she developed 4 episodes of syncope. History was further reviewed and patient reported having similar episodes of syncope occasionally, which had never been reported or evaluated before.
Investigations revealed mild thrombocytopenia, elevated liver enzymes (SGOT 244 and SGPT 178U/l) and otherwise normal hematological and biochemical profile. Pre-induction ripening of cervix was done with Foley catheter. Labor was augmented with oxytocin and a fresh still born female of 1024 grams was delivered. Lactation suppression was initiated.
Upper limb Doppler flows were studied which showed monophasic waveform in left ulnar, radial, brachial arteries, suggestive of occlusion. CT angiogram done post delivery confirmed long segmental complete occlusion of left subclavian and left axillary artery, with presence of calcification. However, there was no evidence of thrombosis. Cardiac echogram showed structurally normal heart without any valvular lesions or pulmonary artery hypertension. Doppler of both renal arteries did not show any evidence of renal artery stenosis.
Serum TSH was high (9.14) hence l 50 microgram of levothyroxine was started. Autoimmune markers were sent, but were negative for ANA, Anti-dsDNA, LA, aCL antibodies (IgM & IgG). Further evaluation, steroids and stenting of the subclavian artery will be planned on follow up after the puerperal period. 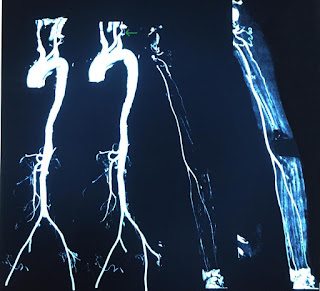 Discussion
The initial presentation of the patient was similar to classic presentation of severe preeclampsia, except that the asymmetric pulse and blood pressure recording pointed towards a peripheral arterial problem. However, the diagnosis of Takayasu arteritis could be ascertained only after the results of the imaging features was suggestive of subclavian stenosis. The occurrence of syncopal attacks also strongly supported the diagnosis. Ours being a tertiary academic center, such diagnosis could be reached with multi-disciplinary consultation.
Takayasu's arteritis is a chronic, relapsing, stenotic, inflammatory disease of medium and large-sized arteries with a propensity for the aortic arch and its branches. Incidence is around 2.5 cases per million and is more prevalent among young women and in Asians.
Hypertension is seen in up to 90% of patients with TKA.[1] However, since the patient had not received any prior antenatal care, it is postulated that hypertension was present but not detected due to lack of medical attention; her presentation was one of hypertension with superimposed preeclampsia.
Though vasculitis, i.e. histopathologic demonstration of inflamed vessels is the gold standard, it is rarely required for establishing the diagnosis, and was not done in our patient.[1] The classical CT angiographic findings include transmural calcific changes and luminal narrowing,[2] both of which were present in our patient (Figure 1). Narrowing of the arterial lumen occurs with thrombosis; however CT scan in our patient did not show the presence of any thrombus.
Pregnancies with Takayasu arteritis have been reported to have a 13-fold higher rate of obstetric complications compared to normal pregnancies. [3] Our patient presented with a blood pressure of 170/110 mmHg and intrauterine fetal demise. Pre-eclampsia, premature delivery and IUFD have been reported to be of higher incidence in patients with TKA.[4, 5, 6]
There were no cardiac events or electrocardiographic abnormalities in our patient. Cardiovascular events are a common feature in this condition. However the occurrence of the same during pregnancy has been reported to be rare,[7] as was in our case. Pulmonary hypertension is a common feature,[8] but it was ruled out in our case on cardiac echogram. The occurrence of renal artery stenosis along with concomitant subclavian stenosis detected in pregnancy has also been reported by Nalini et al.[9]
Our patient was also evaluated objectively for antiphospholipid antibody syndrome (APLA). ANA, Anti-ds DNA, aCL, LA, which were all negative. However, Anti-beta 2 glycoprotein antibody could not be done due to financial constraints. Hence, concomitant APLA syndrome cannot be ruled out. It is interesting to note that aortoarteritis has been postulated to be a precursor to APLA syndrome.[10, 11]
The treatment principles include glucocorticoids, control of hypertension, prevention of renal failure, and arterioplastic approach to stenosed vessels.[1]
To conclude, a vigilant initial general examination led to an early suspicion of a concomitant systemic cause in this patient, a rare vasculitic syndrome. Like in this case, grave medical disorders could first be recognized during pregnancy, and the opportunity should be used for thorough investigation and management. Control of blood pressure appears to be the cornerstone in the management of this disease in pregnancy. A multidisciplinary approach is needed to ensure good obstetric and neonatal outcome. This case is being presented due the novel occurrence of the rare vasculitic condition in pregnancy.