Intramyometrial cysts can be due to cystic degeneration in a leiomyoma, adenomyosis, congenital anomalies in the form of uterine cysts, cervical nabothian cysts, and echinococcal cysts.[1,2,3,4,5] Uterine leiomyomas are the most common benign solid tumors of the female genital system, composed mainly of smooth muscle cells containing various amounts of fibrous connective tissue. These tumors affect 20% to 30% of women at childbearing age, and more than 40% of women above 40 years of age. Cystic degeneration occurs in areas of hyaline degeneration when extensive. It causes formation of a cysts within the myometrium.[3,4,5] A case of a large intramyometrial cyst due to cystic degeneration in an intramural leiomyoma is presented.

A 43 year old female married for 22 years, para 2 living 2 presented with complaints of menorrhagia associated with dysmenorrhoea since 3 months. She would soak of 5-6 pads/day for 3-4 days during menstrual flow. She had undergone laparoscopic tubal ligation 19 years ago. Her medical or surgical history was not contributory. Her general and systemic examination findings revealed no abnormality. The abdomen was soft with a laparoscopic tubal ligation scar. The uterus was enlarged uniformly to 16 weeks' size. A per speculum examination showed a nabothian follicle on the cervix at 6 o'clock position, a small rectocoele and lax perineum. There was no forniceal tenderness or mass. Her biochemical preoperative investigations and chest radiography were normal. Her hemoglobin was 6.5 g/dl for which she received 4 units of packed cells transfusion, after which her hemoglobin became 10.1g/dL. Abdominal ultrasonography revealed an anechoic lesion in the posterior uterine wall, suggestive of a cystic collection, measuring 5.0 × 4.0 cm in size. A total abdominal hysterectomy was performed under spinal anaesthesia. On further dissection of the specimen an approximately 6x4 cm of fibroid was seen in the posterior uterine wall. When cut open it revealed a unilocular cavity with amber colored fluid stained with blood. A provisional diagnosis of cystic degeneration of the fibroid was made with differential diagnosis of endometrial cyst. Post-operative period being uneventful.
The comprehensive histopathological examination of the specimen revealed a large leiomyoma with extreme hyaline and cystic degeneration. The leiomyoma was partly lined by endometrium on its external surface. There was no evidence of any lining epithelium on the inner cystic surface. 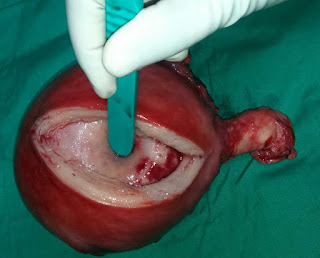 Figure 1. Showing gross specimen of uterus cut open showing leiomyoma. The pseudocapsule of the leiomyoma is indented by pressure of the handle of a scalpel, demonstrating fluid contents of the leiomyoma. 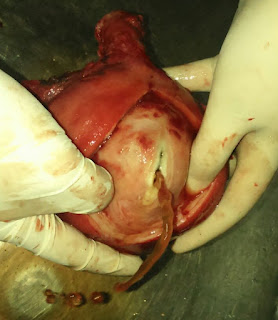 Figure 2. The leiomyoma with cystic degeneration has been cut open. Blood stained fluid is seen escaping from the opening. 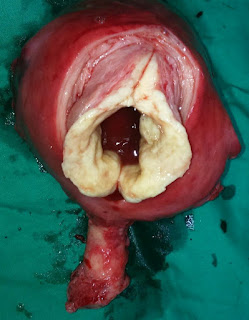 Figure 3. Showing gross specimen of uterus cut open with partially enucleated leiomyoma, which has been cut open to reveal a smooth, shiny inner surface of its cavity. 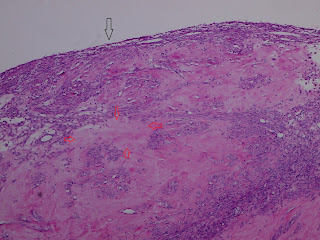 Figure 4. Showing a leiomyoma with extensive areas of hyalinization (red arrows). No lining epithelium is seen on the inner surface of the cavity of the leiomyoma (hollow arrow). (H&E x100) 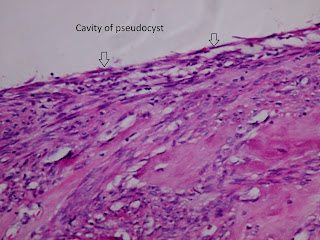 Leiomyomas are the most common uterine neoplasms. They occur in 20-30% of women in the reproductive age group.[3,4,5] They are composed of smooth muscle and fibrous tissue and are benign in nature.[3] Based on their location within the uterine wall, leiomyomas are classified into submucosal/subendometrial, intramural/myometrial or subserosal leiomyomas. Leiomyomas may outgrow their blood supply when they enlarge, causing various types of degeneration; these include hyaline, cystic, myxoid, fatty, infection, red degeneration, dystrophic calcification.[5,6] Hyaline degeneration occurs in 60% of leiomyomas.[3] Cystic degeneration is seen in 4% of leiomyomas. It results in formation of cystic areas with solid contents, or a cavity with irregular walls. Usually these areas are small and scattered. A single large cystic cavity is unusual.[7,8] Such a cavity is not lined by any epithelium and cannot be called a cyst. Hence we call it a pseudocyst, though it is called as a cyst in published scientific literature. Adenomyosis is another important cause of intramyometrial cysts. Histopathology is diagnostic. Congenital anomalies in the form of uterine cysts and echinococcal cysts are uncommon. The former can be diagnosed on histopathology, while the latter can be diagnosed on gross examination as well as histopathology.[7,8] Nabothian cysts are diagnosed clinically by their location in the cervix and gross appearance, and the diagnosis can be confirmed histopathologically, if they are removed at all. The diagnosis of cystic degeneration of a leiomyoma was confirmed on histopathological examination in our case.

Cystic lesions are uncommon in the uterus. Cystic degeneration of leiomyoma and adenomyosis are common causes of this condition. Usually these are cysts are small, but occasionally they can be large.

We than Dr Vijyeta Jagtap for the gross images of the specimen.