Pituitary Macroprolactinoma with Acromegaly in Pregnancy: A Diagnostic Challenge

Prolactinoma is the most frequently occurring hormone- secreting pituitary tumor and account for approximately 25-30% of all pituitary adenomas. Those with diameter less than 10 mm are microprolactinomas and ones larger than 10 mm are macroprolactinomas. They are detected earlier in women due to their effects on fertility and menstrual cycles. Pituitary adenomas with asynchronous prolactin and growth hormone secretion and acromegalic features are known. We present a case of macroprolactinoma in pregnancy with acromegaloid features.

Prolactinomas make up about 40% of pituitary tumors.[1] Prolactinoma results in excess synthesis and secretion of prolactin. Pituitary gland normally undergoes enlargement during pregnancy and regresses after delivery up to six months postpartum.[2] Macroprolactinomas require aggressive management to prevent pressure effects and complications. The choice of treatment is difficult during pregnancy; medical treatment is the first choice. With possibility of growth and pressure symptoms, if adequate response is not achieved with dopamine agonists, surgery is recommended prior to pregnancy.[3] Some adenomas are heterogeneous. Researchers have hypothesized that patients with prolactinoma are likely to have acromegaly as the disease progresses.[4]

A 33 year old lady married for 5 years, with 1 abortion and with 36 weeks 3 days gestation, was referred from private hospital in view of uncontrolled blood pressure (BP), on three antihypertensive medications. She was a known case of hypothyroidism and hyperprolactinemia.
The patient had a spontaneous abortion 5 years ago after which she did not conceive. Two years after abortion she noticed galactorrhea. Also, she had rapid weight gain for a year and amenorrhea of 8 months, for which she consulted a private practitioner. She had neither neurological nor visual complaints.
Her blood chemistry showed hyperprolactinemia with prolactin level of 121.2 ng/ ml. Computed Tomography (CT) scan revealed pituitary gland enlargement of 9 mm. She was treated with cabergoline, 1 mg orally twice a week. Cabergoline therapy was stopped after her prolactin levels fell to normal (15.6 ng/ ml). She conceived one month after stopping the drug.
In her present pregnancy she had uncontrolled BP, and was on 3 antihypertensive medications, namely alfa methyl dopa 500 mg qid, nifidepine 10 mg qid and labetolol 100 mg bd. On examination, she was obese with basal metabolic index of 40 kg/ m2. She had acromegalic features in the form of frontal bossing, enlargement of nose and lips, widening of distal fingers and toes, generalised hyperpigmentation, acanthosis nigricans and bilateral pedal edema. She was afebrile with pulse of 86/ min, BP of 170/110 mmHg. She had albuminuria but no premonitory symptoms. Antihypertensive drugs were continued and labor was induced with dinoprostone gel in view of leaking per vaginum at term. The patient delivered uneventfully, a male baby of 2.91 kg. 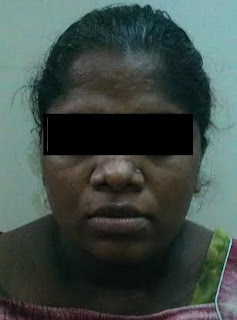 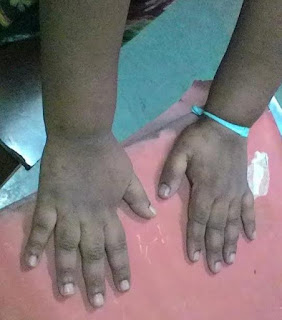 Figure 3. Widening of distal toes and hyperpigmentation of skin.

Her investigations were as follows: hemoglobin 13.1gm %, fasting blood sugar of 97 mg %, postprandial sugar of 78 mg %, fasting insulin level of 24.5 mIU/ L and thyroid stimulating hormone 5.790 U/ml. Her postpartum abdominal and pelvic sonography was normal, and chest X-ray showed no evidence of cardiomegaly. Magnetic resonance imaging (MRI) brain done postpartum was suggestive of pituitary macroadenoma, 1.6 x 1.2 x 1.4 cm T2 hyperintense, T1 hypointense sellar lesion with homogenous post- contrast enhancement. The lesion had a suprasellar extension reaching upto chiasma, left parasellar extension till the median carotid line without any right parasellar extension. The normal pituitary stalk was deviated to the right and normal pituitary gland was compressed in the right.
Endocrinology evaluation was done and investigations were as follows: serum prolactin of 204.6 ng/ml (in dilution of 1:5 indicating actual value of more than 1000 ng/ml), serum insulin like growth factor (IGF-1) of 210ng/ml (normal) and glycosylated hemoglobin (HbA1 C) of 6.1%. Endocrinologist advised that in the absence of any complaints, she should continue breastfeeding and follow up after 3 months. Further management would be decided according to hormone levels and lactating pattern of the patient.

Prolactinomas are seen commonly in women of reproductive age and are seen 10 times more in women than in men. The exact incidence of prolactinoma during pregnancy is not known. The diagnosis of prolactinoma requires both radiographic and biochemical evidence. Sustained hyperprolactinemia should be documented. Normal prolactin levels in women and men are below 25 ng/ml. A level above 250 ng/ml is more likely to be associated with prolactinoma and level >500 ng/ml makes the diagnosis almost certain.[3,5] Most prolactinomas are usually medically responsive to dopamine agonist (DA) therapy. Drugs available for treatment are bromocriptine, cabergoline and quinagolide. Ovulation and fertility are rapidly restored in these women and they should be informed of the same. Normalization of prolactin levels and evidence of tumor reduction are to be ascertained in these women to prevent effects of pressure.[6]
Managing prolactinoma during pregnancy is challenging due to concerns about therapy with dopamine agonists. DA should be immediately stopped once pregnancy is confirmed, except in women with invasive macroprolactinomas.[5] Some patients with prolactinoma develop acromegaly. They may have normal IGF-1 levels at the diagnosis of hyperprolactinemia. In a study by Andersen et al, 3 out of 78 patients developed acromegaly and had elevated IGF-1 levels within 2 to 5 years.[4] This is a group with a pituitary adenoma who secrete prolactin and growth hormone asynchronously. In such patients, annual IGF-1 screening may be recommended.[4] Our patient had acromegaloid features but normal IGF-1 levels and is likely to be from this category who may later develop high IGF-1 levels. Female patients with possibly heterogeneous adenomas may primarily approach clinicians for infertility, amenorrhea or galactorrhea. Periodic evaluation of pituitary endocrine function is recommended in hyperprolactinemic patients.[4,7] Our patient was evaluated for galactorrhea and amenorrhea primarily and developed acromegaloid features in pregnancy. Visual problems or progressive headaches in pregnancy warrant an MRI without contrast to assess tumor size, and a dopamine agonist may be restarted. If it does not work, trans-sphenoidal surgery may be an option.[8] Lactating Women should not be given dopamine agonists as it will impair lactation. Lactation period does not have any harmful influence on tumor growth in a case of prolactinoma.[8] This is in agreement with the opinion of our endocrinologists.

Macroprolactinoma in pregnancy is a rare occurrence, and its treatment during pregnancy and lactation is challenging requiring a combined approach by gynecologists, endocrinologists and neurosurgeons. Patients with hyperprolactinemia may present with acromegaloid features, hence it is essential to regularly screen these patients for overt acromegaly.