An unusual case of postmenopausal lady with cystic degeneration of cervical fibroid with a fistulous communication is presented here.

Leiomyoma / fibromyoma / fibroid constitute the most common benign uterine and pelvic tumors, responsible for about one- third of hospital admissions to the gynecology department. Usual anatomical location is the uterine body with only 1- 2% confined to the cervix.[1]

A 50 year old lady, postmenopausal since one year, presented with history of lower abdominal pain, distension and discomfort since two months. Associated symptoms included constipation but she had no bladder abnormalities. She was Para 4 with 4 live issues, all full term normal deliveries, and was tubectomized. Her past menstrual history was regular with moderate and painless flow. On examination patient was afebrile and hemodynamically stable. Per abdomen examination revealed a non tender mass of 16 weeks' size, in the hypogastrium, firm in consistency with restricted mobility. No ascites was detected clinically. Per speculum examination revealed a pulled up cervix with foul smelling purulent discharge through external os. On bimanual pelvic examination the mass was 14-16 weeks, felt separate from the uterus with forniceal fullness and shortened and firm cervix. Ultrasound revealed a well defined right adnexal heterogeneous mass arising from the posterior wall of the cervix, with predominant cystic and few solid components. The cystic component had a thickened wall of 6 mm with multiple echoes within and solid components showing color uptake. A fistulous communication i.e. abnormal anastomosis between the cervix and mass was seen extending from posterior cervical region to the adnexal mass, as seen in Figure 1. Uterus and bilateral ovaries were normal and seen separate from the mass. Laboratory investigations including complete hemogram, liver and renal function tests were normal. Pap smear suggested chronic cervicitis. 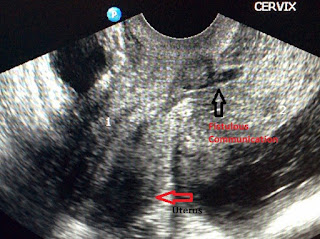 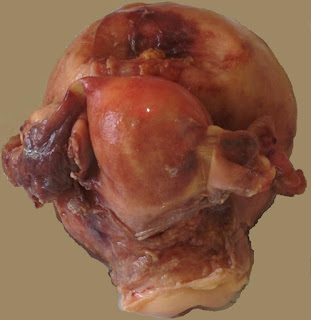 Figure 2. "Lantern on the dome of St. Paul's Cathedral" .

Total abdominal hysterectomy with bilateral salpingo-oophorectomy was performed. The difficulties encountered were separating the posterior peritoneum from the posterior uterine wall. Also adhesiolysis was performed prior to hysterectomy for adhesions between mass, omentum and lateral pelvic walls. The approximate blood loss was 250 ml. Post-operative period was uneventful. Cut section confirmed a cervical leiomyoma with cystic degeneration communicating with cervix as seen in Figure 3. 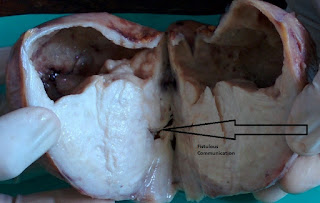 Cervical fibroid is commonly single. It may be either interstitial, subserous, submucous or polypoidal. Cervical fibroid develops in the wall of the cervix, usually in the supravaginal portion.[2] They are similar to fibroids found in other parts of the body of the uterus. They can change the shape of the cervix or lengthen it, grow rapidly and obstruct the cervix. As fibroids enlarge they may outgrow their own blood supply leading to various types of degeneration.[3] Cystic degeneration, seen in 4 % is considered an extreme sequelae of edema.[4] Anterior wall fibroids may present with urinary symptoms, posterior wall fibroids may present with difficulty in passing stools, lateral fibroids could extend to the broad ligament and central fibroids push the uterus upwards. Central large cervical fibroids produce "lantern on the dome of St. Paul’s appearance", due to the uterus sitting atop the expanded cervix. Imaging can diagnose typical features of leiomyoma. However atypical appearances that follow degenerative changes can cause confusion in diagnosis, as in the present case. Hence misdiagnosis of adenomyoma, hematometra, pyometra, uterine sarcoma and ovarian masses is common. The relative echogenicity of leiomyomas depends on the ratio of fibrous tissue to smooth muscle, the extent of degeneration and presence of dystrophic calcification.[5] Computed Tomography (CT) is useful for leiomyomas that are calcified or necrotic. MRI has limitations of cost and availability. Ultrasound being least invasive and most cost effective, becomes the modality of choice. Fibroids are generally iso- or hypoechoic to the myometrium and rarely hyperechoic (due to calcification). Treatment is either myomectomy or hysterectomy.[6] They may give rise to greater surgical difficulty by virtue of relative inaccessabilty and close proximity to bladder and ureter.[7]
In summary, USG helps to confirm diagnosis of fibroid in most cases, however degenerative changes and odd anatomical locations pose a diagnostic challenge. Cystic degenerations can masquerade a hematometra or pyometra in the uterine cavity and knowledge of this unusual case presentation is essential to clinch an apt diagnosis.