Intrauterine contraceptive device IUCD migration in to the small bowel after uterine perforation is a rare but serious event.  Removal of the IUCD in such cases is mandatory because of the risk of complication such as fistula formation and colonic perforation. We present the case of a 28 year-old female with a Copper T 380A IUCD embedded in the small bowel, along with an intrauterine pregnancy of 6 weeks, which was removed with minimally invasive techniques.

A 28 year old female (Gravida 2, Para 1, Living 1) with previous 1 LSCS 5 years ago presented to our hospital with history of one and a half months of amenorrhea with history of intrauterine contraceptive device (Copper T 380A) inserted 5 years back. Patient had a regular follow up for the copper T threads till 6 months, after which she had not visited the hospital. Patient had regular periods without any menstrual dysfunction until last 6 weeks. Her last menstrual date was 50 days prior to admission. There was no history of any medical co morbidities. On per speculum examination, copper T tail was not visible.
Ultrasonography was done which was suggestive of a live intrauterine pregnancy of 6 weeks. The sonogram also revealed the presence of extrauterine IUCD, in the left adnexa closer to the fundus of the uterus.
An exploratory laparoscopy was undertaken during which the uterus and adnexae appeared normal with no evidence of inflammation or any site of perforation. The copper T was seen to be perforating the small bowel and embedded within it. The embedded copper T was gently removed from the 5 mm port. 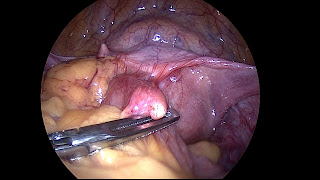 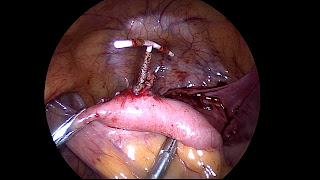 A small 2 inch laparotomy incision was taken through which the perforated small bowel was removed and sutured in 2 layers. An intraperitoneal drain was kept.  After explaining the prognosis and risks to the patient, the pregnancy was continued as per patient’s decision. 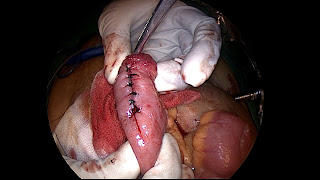 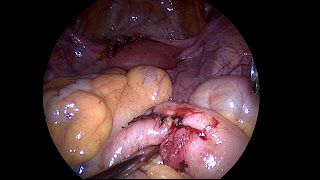 Figure 4. Bowel inserted back into the abdomen.

Most of the uterine perforations are asymptomatic and are unrecognized at the time of insertion.[1] No operative management had been recommended in the past for a migrating IUCD because of the increased morbidity associated with its removal. [1] However, the complication of a migrating IUCD can lead to pain, fibrosis, adhesions and in some cases, can result in penetration into surrounding organs like urinary bladder, sigmoid colon, appendix, and small bowel.[1,2] A perforation in the bowel can cause an abscess formation, intestinal ischemia, or volvulus.[2] Therefore, it has been suggested that exploration and IUCD retrieval should be the primary therapeutic approach for patients with a missing IUCD.[2]
Arslan et al in a review of the literature identified 47 such cases of uterine perforation in which a complication occurred of intestinal penetration. Half the reported cases of intestinal perforation in the literature were that of Copper-7 and copper-T IUCD. Intestinal perforations caused by IUCDs  primarily involved, in order, the sigmoid colon, followed by the small intestine and rectum.[3]
With advances in minimally invasive techniques, these situations can be safely managed with laparoscopy, which has the advantage of less morbidity and faster recovery. Chi et al removed an IUCD which had been completely perforated into the sigmoid colon by performing a laparoscopic assisted resection of the involved sigmoid colon segment. Some authors recommend that partial penetration of an IUCD into the colon wall can be removed laparoscopically with intracorporeal repair of the colon defect.[4] They also suggested that a full-thickness perforation by an IUCD into the colon wall should be repaired by resection of the involved colon with primary anastomosis. In our case, a small 2 inch laparotomy incision was taken to repair the bowel.
Potential complication during removal such as organ perforation (e.g. bowel, bladder) and possible surgical repair surgery such as resection of bowel and colostomy insertion should be discussed in advance. Thus, all diagnosis and treatment can be performed at the same setting as seen in our case.