Possible Underestimation Of The Risk In Case Of Cervical Ectopic

Cervical ectopic pregnancy is one of the rare sites of presentation, and frequently results in hysterectomy as a life saving procedure. We report a 39 year old female who underwent emergency hysterectomy as a life-saving procedure because she presented in shock following a suction evacuation. Review of literature revealed that early diagnosis by good history and sonography can diagnose cervical ectopic. Such cases are better managed at specialist centers with good surgical or interventional radiology expertise to save the fertility. Mismanagement leads to loss of fertility due to hysterectomy in all cases.

Cervical implantation of pregnancy is one of the rare sites for ectopic pregnancy with less than 0.1% incidence.[1,2] Several cases have been reported, guidelines for management formed but still we end up performing hysterectomy in a number of cases reported in the world literature.[3,4,5] Small numbers of cases are successful in preserving fertility, but hysterectomies indicate we still need to learn our lessons well. We report a case of cervical pregnancy which needed hysterectomy as a life- saving procedure and discuss errors that can be corrected to prevent this from happening again.

A 39 year old Gravida 10 Para 3 Living 3 Abortion (MTP) 6 was referred to our center in hemorrhagic shock following suction evacuation for 3 months amenorrhea. She had three prior full term deliveries, one of which was a lower segment cesarean section. She had undergone six MTPs, two of which were surgical abortions. She started heavily bleeding during a suction evacuation done to terminate her three months' pregnancy, when she was referred to us.
On examination, the patient was drowsy and pale. She had a  pulse rate of 124 bpm, her respiratory rate was 18 breaths /min and her blood pressure was 90/60 mm of Hg. Per abdominally there was a previous Pfannensteil scar, no guarding, no rigidity or tenderness. Patient was resuscitated and adequate blood arranged and cross matched. Ultrasound examination was not done as general condition of patient was very poor and valuable time would have been lost. Written informed consent was taken for suction evacuation / laparotomy. A provisional diagnosis of incomplete abortion with perforation of previous cesarean scar was made. In operation theater, per vaginum examination showed that the cervical os was open, cervix was ballooned up and filled with clots, uterus was contracted and bilateral adenexa was not palpable and not tender. A suction evacuation was done assuming incomplete abortion but profuse bleeding started so the decision for laparotomy was taken. Intra operatively the uterus was 10 weeks in size with cervix ballooned up with bluish discoloration. The previous lower segment uterine scar was intact. Now, the diagnosis of cervical ectopic pregnancy was made but by this time the patient’s general condition had further deteriorated so the decision of total abdominal hysterectomy was taken to save her life (Figure 1). She received three red cell concentrates and four fresh frozen plasmas. Her post operative period was uneventful and she was discharged on day 6. Histopathology report confirmed the findings of cervical pregnancy (Figure 2). 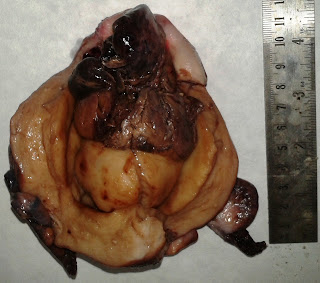 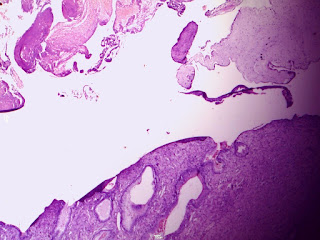 Several methods have been discussed to manage a cervical ectopic pregnancy. Conservative methods include intra-amniotic feticide by using potassium chloride or methotrexate and systemic chemotherapy by using methotrexate.[4,6,7] Curettage can also be used, but commonly results in hemorrhage.[8] Control of bleeding is then done by doing cervical artery ligation and tamponade with Foley catheter. Primary hysterectomy is the treatment of choice in uncontrolled hemorrhage, late presentation of cervical pregnancy beyond 12 weeks and in those women not desirous of further pregnancy.[4,9]
However hysterectomy in a woman who has not completed her family will be traumatizing. This is especially common nowadays in view of multiple attempts at in vitro fertilization. Abortions are managed by dilatation and curettage, and future pregnancy can then adhere to the scar tissue in cervix. Similarly, increased use of lower segment cesarean section has increased the presentation of cervical ectopic like never before.[3]
Commonly, presenting complaints are taken as incomplete abortion with retained products of conception in the cervix by the emergency staff. Further suction evacuation or dilatation curettage can result in profuse hemorrhage that may not be controlled in ill- prepared centers. By the time patient presents to the tertiary level center, the only option is to do a life- saving hysterectomy.
Such pitfalls can be prevented by following several guidelines. Hosni et al in 2014 concluded that early diagnosis is crucial for conservative treatment of cervical ectopic pregnancy.[10] Such pregnancies are best managed at tertiary referral centers where advanced facilities for cervical artery or uterine artery ligation are available, whether surgically or by interventional radiology.
For early diagnosis we need good radiology support. A study by Crochet concluded that patient’s history or clinical examinations alone are insufficient to indicate or eliminate the possibility of ectopic pregnancy. Presence of lower abdominal pain and vaginal bleeding should prompt a transvaginal ultrasonogram and β hCG levels to confirm the diagnosis. No study to date has established a single β hCG level that is diagnostic of ectopic pregnancy.[11] Presence of sliding sign on transvaginal ultrasound can help differentiate retained products of conception from ectopic pregnancy.[12] Gentle pressure by probe on the cervix will cause gestational sac of abortus to slide, unlike that of ectopic pregnancy, which will be adhered to the wall.
Hence, when history suggests risk factors for cervical ectopic like previous cesarean or curettage, transvaginal sonogram by an expert radiologist is essential to confirm ectopic. Sliding sign and fetal heart activity can help differentiate it from retained products of conception. Such cases should then be referred to centers having expertise for ligation of vessels either surgical or radiological. Live fetus can be managed by intra-amniotic potassium chloride or methotrexate. Systemic methotrexate can also be given where intra-amniotic delivery expertise is not available. Occasionally curettage of ectopic can be also be done. But all such cases can result in potentially fatal hemorrhage. Initial management of hemorrhage can be done by packing and tamponade using 30 ml saline filled Foley catheter. However, uncontrolled hemorrhage should prompt early cervical or uterine artery ligation in order to preserve the uterus. It can be done surgically by laprotomy or minimally invasive by intervention radiology.
Centers which lack such radiological and surgical expertise end up referring patients late to referral centers when patient is in shock. At those times, only possible life- saving intervention is hysterectomy, with elimination of future possibility of pregnancy.