Sinus tracts are a common surgical condition. They may occur at various sites in the body. The common sites being pre-auricular, dental, perianal. Abdominal sinus tracts are generally rare. A sinus tract infection and its excision at the post cesarean section scar site has been reported here.

A 30 year old, P2 L2 woman with previous 2 lower segment cesarean sections and tubal ligation done presented with complaints of purulent discharge and pain at suture site of the cesarean section. The last lower segment cesarean section was done 1 year back for fetal distress in first stage of labor through a vertical midline skin incision.The intrapartum and postpartum course was uneventful. She was discharged on day 4 postpartum. Suture removal was done on 12th post-operative day, and wound was healthy. She was asymptomatic until 2 months after surgery, when she noticed a small swelling at the lower end of the incision scar with discharge. The discharge was intermittent and non foul smelling. She had no complaints of fever or rash and no past medical chronic illness. She consulted a private practitioner for the same and was started on some medication. Her symptoms improved for a brief period of time, however it recurred on stopping the medication.
She then came to our hospital 8 months later. On examination, there was a small 0.5 x 0.5 cm swelling on the left side of the cesarean incision scar at the lower end. There were no signs of inflammation. However, there was some discharge through the opening over the swelling. A provisional diagnosis of sinus tract was made. Blood investigations that were done, were within normal limit. A wound swab of the discharge was sent which showed no growth.
An ultrasonography was done, which was suggestive of a 2 cc subcutaneous collection at incision site, an ultrasonography guided aspiration was attempted for the same but failed. She was given oral amoxycillin empirically for 5 days following which her symptoms improved for a brief period. A Computed Tomography (CT) scan with a sinogram was done on recurrence of the symptoms, which was suggestive of blind ending infra umbilical sinus tract with no intraperitoneal connection. A pus swab was sent for culture sensitivity, which was suggestive of Methicillin Sensitive Staphylococcus Aureus (MSSA) for which oral Linezolid 600 mg twice a day was started for 14 days as per the micro organism sensitivity report. The complaints resolved post antibiotic completion.
Two weeks later, she again complained of discharge through the scar site. A repeat ultrasound done showed a 3-4 ml collection at the local site in the subcutaneous plane with no deep communications.
A sinus tract excision was planned due to repeated recurrence of symptoms. Intra operative the sinus tract was found to be 3 cm deep with a horizontal extension noted on probing. The probe was kept and held in the tract to ensure entire excision of the tract. At the base of the tract was the suture knot of the previous surgery. The bulky knot of the suture material that was mono filament nylon was removed and the entire tract was excised by coring out. A wide excision was done en mass and sent for histopathology examination.
She came for follow-up two weeks later.  The wound was healthy and suture removal was done. There was no evidence of any remnant sinus. Histopathology report showed a fibrous tract with fibroblastic and lymphocytic infiltration that was consistent with a sinus tract. 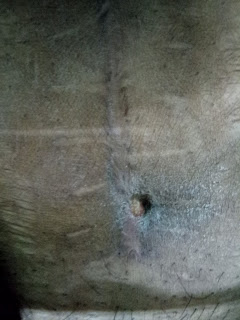 Figure1. Sinus at the lower end of the midline vertical incision. 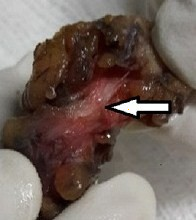 Wound complications post cesarean section are a common entity. These maybe influenced by patient characteristics like obesity, anemia, malnutrition or certain procedure related characteristics like type of skin incision, any previous skin infections etc. The time of presentation can be immediate or late. The commonly encountered complications include surgical site infections, hematoma, wound dehiscence, scar granulomas, and sinus tract formation.
A sinus tract, often referred to as “tunneling wound”is a tract which is closed at one end. The major etiologies for this condition include infections, presence of a foreign body and tissue ischemia following trauma. The symptomatology can vary according to the site and etiology.
For infections presenting after a surgical procedure, foreign body is the most common cause.[2] Some patients may complain of recurring discharge from the scar site. They give a typical history of recurrent symptoms despite medical treatment.The cause of a persistent sinus discharge maybe the size or shape of the tract which leads to inadequate drainage of the cavity, thereby causing repeated bacterial proliferation.
The treatment is primarily surgical, which involves removing the retained foreign body like suture followed by a complete excision of the sinus tract. It is crucial to note the site, size and depth of the tract by probing. This ensures a complete assessment of the extent of the tract and will ensure a complete removal. Besides probing, a pre-operative sinogram can be done. However, it is vital to first obtain a wound swab to treat any underlying infections.
Braided suture materials pose a higher chance for wound infections.[3] However, in our patient, it was the retained mono filament nylon suture knot at the lower end of the rectus sheet that acted as a foreign body and nidus for infection causing the persistently discharging sinus tract. Nylon sutures are non-absorbable sutures and are commonly preferred for rectus sheath and skin approximation due to their high tensile property, permanent nature and minimal tissue inflammatory properties. This still caused a sinus tract which we presume to be secondary to wound infection that was harbored in the bulky knot. To completely cure the patient it is essential to excise the foreign body along with the entire sinus tract. This also prevents recurrence of the same.

Sinus tracts if not evaluated thoroughly can lead to persistent infections due to incomplete excisions. A comprehensive understanding of the wound etiology and complete assessment and excision of the extent of the tract is crucial in order to ensure a complete recovery.