Inevitable Myomectomy In A Cesarean Section

Conventionally myomectomy along with cesarean section has been discouraged due to risk of excessive hemorrhage, infection and need for obstetric hysterectomy increasing the burden of maternal morbidity. Here we present a case of a 30 year old primigravida at 38 weeks of gestation who came to our hospital with ultrasound suggestive of a large intramural leiomyoma in antero-inferior uterine wall (corpo-cervical region) measuring 8x6.8 cm, subjacent to the inferior edge of the placenta. An elective lower segment cesarean section was done at 38 weeks of gestation. Leiomyoma bulged into the incision site and myomectomy had to be done concurrently. Post operatively patient had normal post natal course and was discharged.

Leiomyomas are benign tumors of smooth muscle cells of the uterus having an incidence of 40–60 % by age 35 years and its incidence in pregnancy is about 0.3 -7.2 %.[1, 2] Though the etiology is unclear many factors have been associated with it like age, ethnicity, genetic predisposition and hormones.[3] Growth of leiomyomas in pregnancy has been linked to hormones like estrogen, progesterone and growth hormones.[4]  Myomectomy as a surgical procedure done along with cesarean section has an incidence of around 0.89 % of all cesarean sections.[5] Until last decade incidence of myomectomy with cesarean section was much less so as to avoid uncontrollable hemorrhage and need of subsequent hysterectomy. Careful case selection with adequate surgical skills and experience is very important for successful surgical management of uterine fibroid. Whether an elective myomectomy should be done along with cesarean section should be decided cautiously and probably be undertaken in patients with pedunculated fibroids or when uterine closure is not possible without myomectomy.

A 30 year old female married since 5 years, primigravida with 38 weeks of gestation was referred to our hospital with an ultrasound suggestive of a large intramural leiomyoma in antero-inferior uterine wall (corpo-cervical region) measuring 8x6.8 cm, subjacent to the inferior edge of the placenta. It was diagnosed in an ultrasound scan performed at 16 weeks of gestation. Repeat ultrasound done in our hospital was suggestive of lower uterine segment intramural leiomyoma measuring 8.4x8 cm without any appreciable internal vascularity or  necrosis. She had no complaints related to myoma like abnormal uterine bleeding or pain, prior to pregnancy and also she had no complications during pregnancy. There was no history of previous pregnancy loss, infertility treatment, pressure symptoms or urinary tract infections.
On admission, she was afebrile, pulse was regular and had good volume. She had normal blood pressure. Systemic examination was normal. On per abdominal examination, uterus was full term with transverse lie in a dorso anterior position, fetal heart sounds were regular with rate of 140 bpm and the uterus was relaxed. On per vaginal examination, os was closed and uneffaced.
She was counseled and a consent was obtained for lower segment cesarean section, classical cesarean section, myomectomy and obstetric hysterectomy if need arises. An elective lower segment cesarean section was done at 38 weeks of gestation. Abdomen was opened by infraumbilical midline vertical incision.  Intraoperatively intramural leiomyoma was noted on lower uterine segment towards right side having size of approximately 7x8 cm. The uterovesical fold was identified and was found to be stretched over the leiomyoma, otherwise it was free. It was incised and lower end was pushed over the fibroid down with the bladder. Incision was taken at about 2 cm above the upper end of the myoma so as to avoid going through the myoma. This was almost the junction of the upper and lower segment.  Placenta was anterior and just reaching the lower uterine segment. Incision was taken over the lower edge of placenta and membranes were reached. Baby was delivered by breech extraction after internal podalic version. Leiomyoma was seen protruding through the lower edge of uterine incision. [figure. 1]  Myomectomy was inevitable as the two uterine edges could not have been approximated keeping the myoma in situ. Leiomyoma was cored out of its bed [figure. 2]. Leiomyoma bed was obliterated with catgut no. 2. Oxytocin infusion were started and continued for 24 hours post delivery.  Blood loss in the procedure was approximately 500 ml. Cesarean section was uneventful. The amount of blood and the operative time were similar to the other cesarean sections. The diagnosis of leiomyoma was confirmed on histopathological examination which was suggestive of leiomyoma with areas of myxomatous, hyaline, and degenerative changes. Postoperative period was uneventful and patient was stable and discharged on day 5. 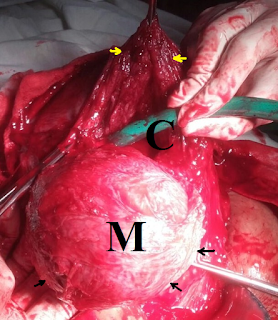 Figure 1. Intraoperative finding showing the myoma bulging at the lower edge of the LSCS incision  (black arrow). Yellow arrow is the upper edge of the incision. M is myoma and C is the uterine cavity. 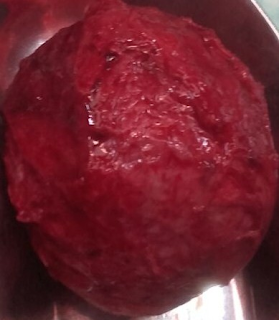 Leiomyoma is the most common benign uterine tumor with the prevalence in pregnancy being 2 to 5 %.[6]  Most myomas are asymptomatic and can be observed. Among pregnant women the incidence is more in those with advanced maternal age. Sudden increase in size or degenerative changes may be responsible for pain. Even though pregnancy with fibroid  uterus may be uneventful, leiomyomas may produce pressure effect, pain from red degeneration, malpresentation, maternal hydronephrosis, preterm labor and 10-30 % may develop complications.[7] The myomas may present with complications in pregnancy such as fetal malpresentation, intrauterine growth restriction,  placenta previa, placental abruption, labor  dystocia, intrapartum and postpartum hemorrhage, peripartum hysterectomy, subinvolution of the uterus and postpartum endomyometritis. In our case, malpresentation (transverse lie) and placenta previa (grade 1) was present. Uterine fibroid is per se not a contraindication for labor unless it causes obstructed labor or other obstetric condition exists which demands cesarean section. Approximately 73 % women with leiomyoma undergo cesarean section, the common indications being obstructed labor and malpresentation.[8] Myomas measuring more than 5 cm in diameter, submucosal and retroplacental myomas are at higher risk of preterm labor, premature rupture of membranes, hemorrhage and need of blood transfusion.
When large myoma is present in the lower uterine segment, myomectomy is required in most of the cases, whereas small myomas and if single in number can be left alone especially when asymptomatic. There is an associated increase in operative time and average blood loss during surgery. One of the most serious complications associated is severe hemorrhage which if uncontrolled in rare instance may require hysterectomy.  Previously classical cesarean section was done when a lower segment leiomyoma was encountered. However, such cases have increased chances of scar dehiscence, scar rupture, placental implantation at scar site, risk of adherent placenta and further obstetric complications in future pregnancies. In our case had the leiomyoma been intramyometrial completely occupying the lower segment we would have done classical cesarean section.  As myomectomy is done with lower segment cesarean sections these days, the obstetrical complications related to classical sections have reduced to some extent. Serial ultrasound evaluation should be done to assess the increase in the size of leiomyoma starting from the first trimester itself. Some studies have shown that when myomectomy is done during cesarean section, uterine involution was comparable to control cases. In patients with previous myomectomy, uterine rupture can occur in third trimester or during labor.