Shah NH*, Deshmukh M**, Somani A**, Paranjpe SH***
(* Consulting Gynecologist/Obstetrician, Hon. Endosopic Surgeon Wadia Hospital & Railway Hospital Byculla, ** Consulting gynecologist/obstetrician, Vardann Hospital, *** Director, Velankar Hospital & Paranjpe Maternity Home, Mumbai, India.)
Abstract
With the advent of new technology nowadays, hysteroscopic septal resection has become procedure of choice in cases of uterine septum. Uterine septum is a type of mullerian anomaly diagnosed often in case of infertility and recurrent pregnancy loss. But it has certain limitations like use of glycine as distension medium and monopolar resectoscope. We report a case of primary infertility with complete utero-cervico-vaginal septum, a rare mullerian anomaly which was managed hysteroscopically with a saline bipolar resectoscope and had a successful pregnancy outcome.
Introduction
Incidence of congenital uterine anomalies in general population vary widely from 0.001-10 %. In women with infertility, incidence is slightly higher at 3-6 %.[1] The incidence of mullerian anomalies also differ widely, ranging from 0.16 to 10 %.[2]
Most of the cases of this type can be explained by the theory of caudal – cranial fusion and canalisation. But anomalies involving the uterus, cervix and the vagina may be explained by the theory of bidirectional and segmental fusion of mullerian duct. They commonly present with pelvic pain, vaginal pain, dysmenorrhea, infertility, and recurrent pregnancy loss. Mullerian defects are associated with increased incidence of urinary anomalies, early pregnancy loss, premature rupture of membranes, preterm labour and malpresentations.
Case Report
A 28 year old nulligravida, married since 2 years presented with complaints of dyspareunia since marriage. She was also anxious to conceive. She had regular normal menses. General and systemic examination was normal. On speculum examination, a longitudinal vaginal septum was seen showing two unequal vaginal cavities (right being roomier) and septum extending upto the cervix showing two cervical openings. Blood investigations, hormonal assays, baseline follicular study and semen analysis of male partner were all normal. Ultrasound was suggestive of either bicornuate or a septate uterus. Diagnostic hysterolaparoscopy showed longitudinal vaginal septum with two cervices and a broad single fundus. 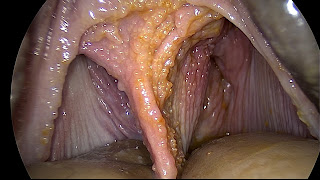 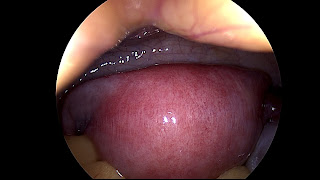 Figure 2. Preoperative picture of the uterus
A hysteroscopic resection of complete utero-vaginal septum with saline bipolar resectoscope was proceeded in the following manner.
Vaginal septum was resected with Collins knife (bipolar resectoscope) till cervix was reached
Both cervical os were dilated and tubal patency was checked through each half of the cervix independently. Bilateral free spill was seen.
Paediatric Foley’s catheter was inserted through the left cervix and inflated with methylene blue.
Hysteroscopy was done through the right cervix and uterine septum was resected with Collins knife (bipolar resectoscope) till cavity was opened into a single uterine cavity and Foleys from the other side was seen
Uterine fundus was rechecked laparoscopically. 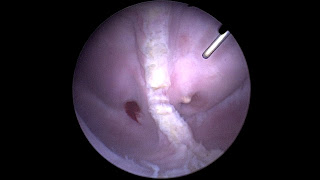 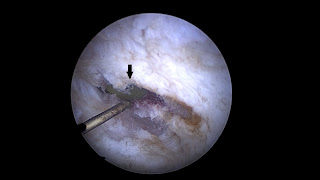 Figure 4. While cutting the uterine septum, Foleys (Black arrow) from other side of the cavity can be seen 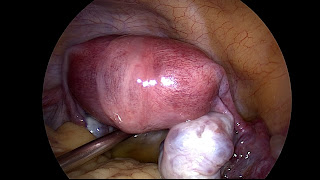 Figure 5. Postoperative picture of the uterus

Foley's catheter was retained inside the uterine cavity and removed after 10 days. Postoperative treatment with estrogen and progesterone was given for 3 months followed by second look hysteroscopy after 3 months. It showed a normal cavity with normal volume and both ostia were seen. She spontaneously conceived after 4 months of surgery. Pregnancy continued well on progesterone support and she was delivered by cesarean section at term.

Mullerian ducts are the rudimentary basis of the female reproductive tract. The uterus and part of vagina are formed by the medial migration of the caudal and middle parts of the mullerian duct. Cranial 1/3rd develops into the fallopian tubes. Middle 1/3rd forms the uterus and cervix and caudal 1/3rd develops into the upper 3/4th of vagina. Complete formation and differentiation of the vagina occurs in the 3rd month of embryonic life from the lower end of uterovaginal canal (mullerian duct) and the Urogenital Sinus. Uterovaginal canal fuses with sinovaginal bulb (develops from posterior aspect of urogenital sinus) forming vaginal plate which later canalizes to form the vaginal canal. Mullerian duct development into female reproductive system depends on completion of organogenesis, fusion and septal resorption. Anomalies of the duct can result from problems in fusion or absorption.[3]  Defects of lateral fusion may be symmetrical or non-symmetrical groups. These may be further classified into obstructive and non-obstructive sub groups. Disorders of vertical fusion includes vaginal septa, cervical agenesis or dysgenesis.[4] The American fertility society (1988) classified mullerian anomalies into 7 classes (I-VII).[5] The  ESHRE classification of mullerian defects ( 2017)  has systematically categorized the  anomalies. These are based on deviations of uterine anatomy, and levels of severity of uterine deformity. Most importantly, the cervical and vaginal anomalies have independent sub-class identification. These defects occur by means of arrests in different stages of mullerian duct development and leads to symptoms like cyclical/ acyclical dysmenorrhea, pelvic and vaginal pain, difficulty in intercourse, dyspareunia or vaginal bleeding.
Our patient does not fit into the American fertility Society (1988) classification but she fits into the ESHRE/ ESGE 2017 classification in Class U2b (complete septate uterus and septum fully dividing the uterine cavity up to the level of the internal cervical os), class C1 (septate cervix inclusive of all absorption defects of cervix), V1 (longitudinal non-obstructing vaginal septum). Patients who have complete septate uterus could be of either type: with and without cervical and/ or vaginal defects. Transvaginal ultrasonography is a useful aid in diagnosing septate uterus.[6] 3 dimensional ultrasound done transvaginally ensures adequate diagnostic accuracy of more than 80%.[7] MRI gives a good tissue image which is quite reliable in differentiating between a septate and a bicornuate uterus.[8] The  conventional methods of surgical correction described by Strassmann, Jones and Tompkins metroplasty have many associated problems. The newer method is transcervical hysteroscopic lysis of uterine septum. While the risks and complications of glycine, like hyponatremia, increases with this method, prolonged operative time due to less expertise and skill may also lead to effects of prolonged anesthesia. This has been overcome in our case by the use of saline bipolar resectoscope which avoids use of glycine and prevents its complications. Thus, it not only reduces the intraoperative period but also decreases hospital stay. This being a simple method rather than the complicated abdominal procedures, our patient had a good pregnancy outcome.
Conclusion
The use of hysteroscopic septal resection with saline medium appears feasible, safe and results in good reproductive outcomes.