Bilateral mature cystic teratomas are a rare occurrence especially in young women. Often, they may undergo torsion or rupture leading to complications if not detected timely. We present a case of an adolescent girl diagnosed to have bilateral dermoid cysts with unilateral adnexal torsion, managed laparoscopically.

Mature cystic teratomas are common in women in the reproductive age group. They are generally benign, however rarely in 2% cases they may undergo malignant changes.[1] Adnexal torsion occurs in about 3.5% of benign cystic teratomas and is the most common associated complication.[2] Repeated torsion and detorsion events can lead to ischemic changes and in severe cases may lead to permanent damage to ovarian tissue.

A 19 year old, unmarried girl presented with complaints of vague pain in the abdomen on and off since one week. There were no other associated symptoms. Her menstrual cycle was regular. On examination vital parameters were normal. On examination of cardiovascular and respiratory system, no abnormality was detected. On per abdomen examination, abdomen was soft with mild tenderness in left iliac region. On per rectal examination, a tender mass was felt in the left adnexa. Her blood investigations were normal. Ultrasound imaging revealed bilateral complex ovarian masses around 5-6 cm with mixed echogenicity suggestive of dermoid cysts with a possibility of torsion. In view of the clinical and radiological findings, a decision for laparoscopic surgery was taken.
She was given general anesthesia and total four laparoscopic ports were introduced. Intraoperative findings were suggestive of bilateral ovarian cysts approximately 6 cm with torsion of the left side adnexa. The left side ovarian cyst appeared congested, edematous and dark with two twists over the infundibulo-pelvic ligament. The torsion was unwound and vascularity was restored in the pedicle, hence only a cystectomy was done. The ovarian tissue was conserved. Similarly, a cystectomy was done on the contralateral side too. Considering the possibility of a mature cystic teratoma, both cysts were retrieved in a surgical glove with aspiration and mechanical morcellation. The contents of the cysts contained tufts of hair and sebaceous material suggestive of a dermoid cyst which was confirmed on histopathology.
There was no spillage of the cyst contents intraperitoneally. Her postoperative course was uneventful and she was discharged on day 2 post surgery. 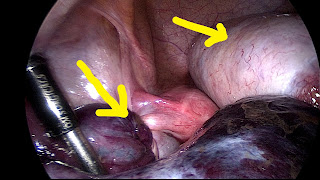 Figure 1. Image showing bilateral ovarian cysts (yellow arrow) with the uterus in between the two cysts. 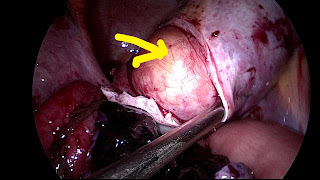 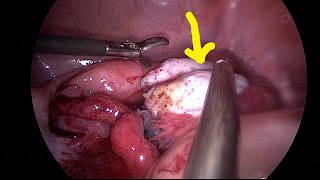 Dermoid cysts are the most common germ cell tumors. They comprise about 20-25 % of all ovarian tumours. They are mostly unilateral however bilateral presentation has been noted in 10-15% cases.[3] Torsion is the most common complication of a dermoid cyst. Some factors predisposing to torsion are a large size of the cyst (generally >5 cm) or elongated infundibulopelvic or utero-ovarian ligaments.
A study reported that, torsion was incidentally diagnosed in about 2-15 % of women who underwent operative treatment for adnexal masses. Most patients are asymptomatic and diagnosis is often ascertained by radiological modalities. Ultrasonography has a low sensitivity for diagnoses ranging from 40-75 %.[4] Doppler studies reveal blood flow patterns and may play a role in screening but is not diagnostic. However, owing to direct visualization, laparoscopy remains the best method for diagnosing as well treating.
Laparoscopy, being minimally invasive offers numerous benefits over conventional laparotomy. However, substantial surgical skill is required to ensure that the cyst remains unruptured during retrieval. Oophorectomy was the treatment of choice in the past in cases with a large cyst, those with torsion or where occult malignancy was suspected. However, preservation of ovarian tissue is extremely critical in young patients. Conservation of the ovarian tissue despite visible necrosis in cases of torsion has been recently recommended.[5] Multiple studies have reported that vascularity is regained in the apparently necrosed appearing ovaries on detorsion, the color changes and edema however resolves subsequently over a period of time. The recurrence rate after surgery remains 4.2 %.[6] Hence a close surveillance and follow up is necessary which has been enabled by the advent of better imaging modalities over the past few decades.

Dermoid cysts are often asymptomatic or may present with vague symptoms. Bilateral large cysts have a tendency to undergo torsion. Timely detection and management of these cysts is essential especially in young adolescent to preserve ovarian function and fertility.