Ruptured ectopic pregnancy is an obstetric emergency which can have catastrophic outcomes if timely management is not administered. Laparoscopic management of an ectopic has numerous benefits with a competent and experienced team. We present a case of massive hemoperitoneum due to a ruptured ectopic managed effectively by laparoscopy.

Ectopic pregnancy is an extrauterine pregnancy. The incidence of ectopic pregnancies is about 1-2%.[1] A ruptured ectopic may lead to life threatening complications and needs immediate surgical management. In the current era, advanced development in the surgical techniques and equipment has made laparoscopy the surgery of choice. However, massive hemoperitoneum can pose a great challenge in managing patients laparoscopically.

A 28 year old, primigravida presented with 2 months amenorrhea and intermittent spotting per vaginum since 3-4 days. On examination, general condition was moderate, pulse was 112 beats/ minute, blood pressure was 80/60 mm of Hg, pallor was present. Cardiovascular and respiratory system examination was normal. On per abdomen examination, abdomen was soft with full flanks and tenderness in iliac region. On per speculum examination os was closed with slight bleeding noted through the os.
Her urine pregnancy test was positive. A provisional diagnosis of ectopic pregnancy was made and colpopuncture was done. It revealed dark colored blood. Blood was drawn for investigations and cross matching, after immediate access of an intravenous line was obtained. She was started on crystalloids and colloids while awaiting for blood and blood products. An urgent transvaginal ultrasound was done which also suggested a ruptured tubal ectopic pregnancy. Laboratory investigations revealed a hemoglobin of 6.4 gm%, total leucocyte count  was 5500/cu.mm, platelet count  was 1,14,000 /cu.mm and INR was 1.4.
A decision for surgery via laparoscopy was taken. She was given general anesthesia and ketamine was used as the anesthetic agent. Three ports were inserted; 10 mm supraumbilical primary port and two 5 mm secondary ports on the left side. Intraoperatively, massive hemoperitoneum was noted with a left ruptured ampullary pregnancy. The opposite adnexa and uterus were normal. The hemoperitoneum and clots were evacuated by suction and blood loss amounted to 3 liters. Around 15 degree of head low position was given to clear the blood from the visual field and enable better visualization. Left side salpingectomy was done with the help of a harmonic and bipolar cautery. Copious peritoneal lavage was given and the ports were sutured with non-absorbable suture material. She was transfused 4 units whole blood and 3 units of fresh frozen plasma. 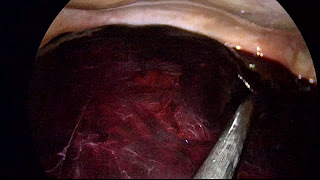 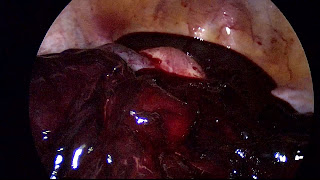 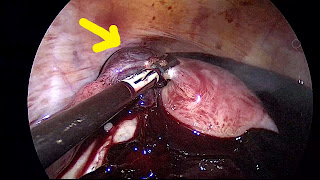 Figure 3. Image of the ruptured left sided tubal ectopic with arrow pointing towards the site of rupture. 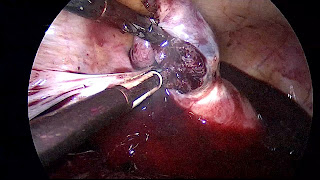 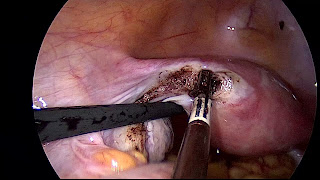 Figure 5. Image depicting the final view after salpingectomy and suction and irrigation

She was kept in the ICU for observation for 24 hours. There was no requirement for inotropic support throughout the procedure due to proper fluid management and timely administration of blood and blood products. Her post-operative period was uneventful. She was started on orals after 24 hours and discharged on day 3. She came for follow up after one week, on examination vitals were stable and port sites had healed well.

Ectopic pregnancy is a common cause of first trimester bleeding. A timely diagnosis and surgical management of a ruptured ectopic is crucial and often life saving. The choice for mode of surgery (laparotomy versus laparoscopy) generally depends upon the hemodynamic condition of the patient and the expertise of the operating surgeon. Evidence has shown that laparoscopy is effective in managing patients with massive hemoperitoneum in experienced surgical hands.[2]
The choice of anesthesia in these patients is always general. Ketamine may prove to be beneficial in these patients due to its sympathomimetic action. It leads to an increase in blood pressure and cardiac output which has a beneficial role during surgery. Besides the positive action on the cardiovascular system, it also has a profound analgesic effect which is effective in pain management.[3]
Carbon dioxide is the most common gas used for creating pneumo-peritoneum. Hypercarbia can have significant effect on the cardiovascular system. The intra-abdominal pressure should be maintained below 10 mm of Hg to avoid the myocardial depressant effect of the gas at higher intra-abdominal pressure. At pressure between 8-10 mm of Hg, it has a sympathomimetic effect which increases both the heart rate and blood pressure which may prove beneficial in such cases.[4]
A proper positioning of the patient during surgery may also prove to be an effective measure. The Trendelenberg position (head low) helps keep the visualization in the surgical field better and avoids pooling of blood in the dependent areas of the pelvis. Besides, this position has been commonly adopted for improving venous return in patients with hypotension to improve cardiac output.
Immediate intervention by an experienced team, timely availability of blood and blood products and vigilant monitoring helped manage this case laparoscopically. The use of harmonic instrument also greatly helped to decrease the operative time. Laparoscopy has also shown to have better fertility outcomes in the future with lesser rate of recurrence for ectopic. [5]

Laparoscopy provides major benefits over conventional laparotomy in terms of faster recovery and ambulation, lesser blood loss and decreased requirement of postoperative analgesia and shorter operative time. Managing patients with massive hemoperitoneum due to ruptured ectopic laparoscopically is a great challenge. In expert hands, this method is safe and can emerge as the method of choice given the benefit of carbon dioxide insufflation in these group of patients.