Fibroid is a common benign tumor of the reproductive age having a 20% incidence rate.[1] Extra uterine fibroids are usually benign and also cause a dilemma in the diagnosis. We present here an interesting case of a 45 year old lady with an extraperitoneal fibroid in the anterior abdominal wall. Patient had no concomitant fibroid in the uterus or anywhere else. She also had no history of previous open or laparoscopic fibroid surgery.  Histopathology confirmed a benign fibroid.

Fibroids are the commonest benign tumors of the uterus. Extra uterine fibroids always pose a diagnostic dilemma because of its unusual positions. Other sites where fibroids can arise from may be the broad ligament, round ligament, fallopian tube, anterior abdominal wall or sometimes even the bowel. The fibroids which arise from these unusual locations are thought to arise due to seeding, after a previous fibroid removal surgery. These fibroids are associated with a previously morcellated uterus or a fibroid hence sometimes are also known as parasitic fibroids.

A 45 year old lady para 2 living 2, presented with a lump in abdomen till the umbilicus. She was not aware of the lump until a sonography was done by her family doctor. She was of the opinion that her weight and abdominal fat was increasing due to sedentary lifestyle and had also started sessions of exercises for the same to reduce the fat. She had no pain in abdomen.  Only other associated complaint she had was dysmenorrhea and irregular cycles. She had previous 2 cesarean sections for her previous 2 deliveries about 20 years back.  On examination, the mass was around 22 weeks in size arising from the pelvis, non mobile and firm in consistency. Her hematological work up was within normal limits. CA 125 was 19 U/ml; also within normal limits. Ultra sonography showed a large mass arising from the pelvis probably a fundal fibroid. Both ovaries were normal. She was scheduled for exploratory laparotomy. A vertical midline incision was taken and abdomen was opened in layers till the rectus muscle. After separating the rectus muscle, the mass was visible before opening the peritoneum. The fibroid was completely separated from all sides before opening the peritoneum. The mass was completely removed with the peritoneum still intact. The consistency of the mass was similar to that of a fibroid and weighed about 2.2 Kg. After opening the peritoneum, the uterus was seen which was bulky but free from any fibroid. In view of the previous 2 cesarean deliveries, there were a lot of bladder and bowel adhesions. A subtotal hysterectomy could be carried out due to thick dense bladder adhesions. Bilateral salpingectomy was also done. While closing the peritoneum, a clear pedicle was visible. It was a small stalk like pedicle attached to the peritoneum. Hence a small portion of the peritoneum along with the pedicle was excised. The defect could be easily closed and the abdomen was closed in layers. The mass was sent for histopathology and was confirmed to be a leiomyoma with no necrosis, mitosis or atypia. 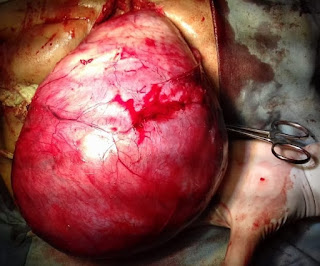 Figure 1. After separation of rectus muscle, tumor could be seen 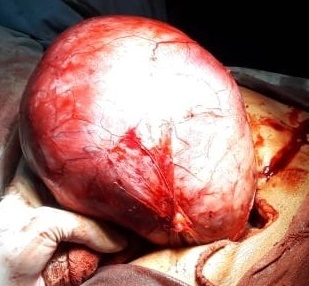 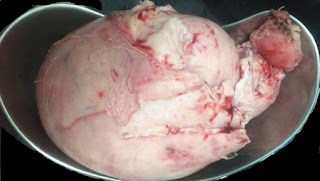 Figure 3. After removal of the fibroid and the uterus

The incidence of fibroids in a premenopausal woman ranges from 20 to 30 percent as discussed earlier. But the incidence decreases sharply after menopause as it is believed that hormonal changes help in spontaneous resolution of fibroids. Fibroids outside of the uterus are a rare occurrence and are caused mostly due to seeding of small particles after a previous fibroid surgery and more after a laparoscopic morcellation.[2]  A theory has been postulated that fibroids in the anterior abdominal wall can be spontaneously formed by the formation of smooth muscle cell tumors originating from the cells of the vessel wall in the anterior abdominal wall.[3] It is suggested that fibroids can grow from smooth muscle cell of the uterus or rarely from smooth muscle of the intestine or a vessel wall. It is formed by a somatic mutation of the cells and a symbiotic action of various hormones and a deranged lipoid metabolism and growth factors.[4] Also, it has been recently found that fat cells play a role in the initiation and growth of a fibroid by a pro inflammatory cytokine called TNF-α.[3,4] Other tumors arising from the anterior abdominal wall may be well differentiated tumors originating from fat cells or muscle or mesothelial cells or fibrous tissue. Most of the smooth muscle cell tumors are benign. A malignant transformation is found in dispersed cases.[5] Here, the diagnosis of a de Novo anterior abdominal wall fibroid cannot be made as she has a history of previous 2 cesarean sections 20 years back. But there was no history of any fibroid removal surgery nor there was any concomitant uterine fibroid. There are reports of formations of fibroids in old scars as old as 30 years.[6] Also, in literature, Parasitic fibroids are described to be found in the retro peritoneum as well as in the pre peritoneum. It has been postulated that the original fibroid must have grown from the uterus , but over time it receives blood supply from some other location and is cut off from the original site like a parasite.[7] Thus as discussed , there was no gynecological surgery done in this patient. But it can always be said that it could be possible that some seeding must have occurred during the cesarean section while closing of the uterine incision which was done 20 years ago.