Abstract
Ectopic pregnancy causes significant maternal morbidity and also maternal mortality. Broad ligament pregnancy is very rare type but has high maternal mortality. Diagnosis of this condition is seldom done with imaging techniques. Definitive diagnosis is usually done intraoperatively either during  exploratory laparotomy or by minimally invasive surgeries especially in a young stable patient. We are presenting a case of a 28 year old female with clinical suspicion of right sided tubal ectopic pregnancy. Diagnosis of right broad ligament pregnancy was done during laparoscopy.

A 28 year old female Gravida 2 Para 1 Living 1 presented to emergency ward with complaints of pain in abdomen since 2 days, and one episode of spotting per vaginum. She had 2 months of amenorrhea. Her urine pregnancy test was positive. She had previous vaginal delivery. There was no previous history of surgery or significant medical history. No other significant past history was obtained.
On general examination, she was conscious, afebrile. Her blood pressure was 110/60 mm of Hg, and pulse was 86/min. Mild tenderness in right iliac fossa was present on abdominal examination. Per speculum examination revealed minimal blood discharge through the os. On vaginal examination  ill-defined mass in the right fornix was felt with positive cervical motion tenderness. Size of the uterus could not be assessed due to tenderness.
Transvaginal ultrasound (TVS) revealed empty uterus with thickened endometrium. There was an ill-defined mass measuring 3*2 cm on the right side of the uterus suggestive of an unruptured right tubal ectopic pregnancy. There was no free fluid collected in the pouch of douglas. Hematological examination showed hemoglobin level of 8.8 gm/dl and white blood cell count of 12,500/ mm3. Serum β HCG measured 26,198 mIU/ml.
From this clinical and ultrasonographic findings, diagnosis of right ectopic pregnancy was made but the exact location was uncertain. As she was hemodynamically stable, a decision for laparoscopy was taken for definitive diagnosis and management. A 3*2 cm irregular mass in the right broad ligament most probably ectopic pregnancy was found with minimal blood in the POD. Uterus, both the fallopian tube and ovary appeared normal. 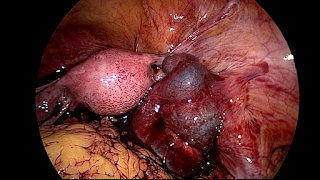 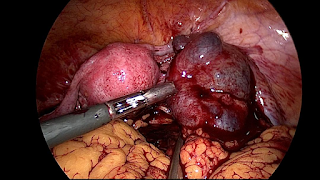 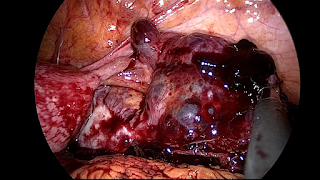 Figure 3. Removal of the mass. 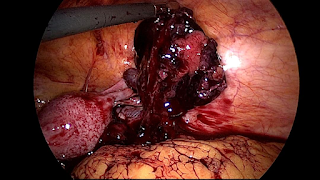 Figure 4. View after removal of the complete mass. 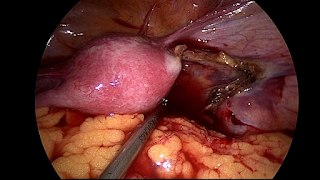 The Broad ligament was opened and excision of mass was done. Hemostasis was achieved by bipolar cautery and bleeding could be easily controlled. Also, right salpingectomy was done. The tissue was completely removed and sent for histopathological examination. Ureter peristalsis was confirmed again after giving wash and right ureter was visualized.  Histopathology report confirmed the tissue as products of conception. Postoperative course was uneventful and she was discharged on 4th postoperative day.

Being a rare condition, diagnosis of it is challenging. One needs a high index of suspicion for such a rare diagnosis. Laparoscopy should be considered for diagnosis and management whenever in doubt in appropriately selected patient.