The use of uterine artery embolization (UAE) in women who wish to retain their fertility is a controversy. There are concerns that premature ovarian failure and impaired decidual blood supply supposedly caused by UAE contribute to infertility and recurrent pregnancy loss. We report a case of a nulligravida with UAE done for fibroids that not only alleviated her symptoms but also resulted in a successful live birth.

UAE has been used successfully since three decades for the treatment of symptomatic uterine fibroids. However, its effects on the child bearing function have not been satisfactorily examined and need further evaluation.

Case Report
A 27 year old recently married nulligravida had visited our outpatient department with complaints of heavy menstrual bleeding and dysmenorrhea since one year. On examination, she was markedly pale and there was a 20 weeks gestation size firm mass arising from the pelvis. She was admitted in view of hemoglobin of 3.6 gm% and the anemia was corrected by blood transfusion and parenteral iron. She was prescribed tranexamic acid with ethamsylate during menses to limit her blood loss. The ultrasound was suggestive of multiple small uterine fibroids and a large submucosal anterior wall fibroid. A computed tomography of abdomen and pelvis done for fibroid mapping was suggestive of a bulky uterus (volume of 400.5cc) with a 4.5 x 4.2 x 4 cm (volume 39.3cc) submucosal, left lateral fibroid and a conglomerate of multiple small fibroids throughout the uterus. In view of the severity of menorrhagia, multiple number and the scattered location of the fibroids she was offered myomectomy or uterine artery embolization as treatment options. She was counseled regarding the uncertain effects of UAE on reproductive function and the associated risks of both myomectomy and UAE. She opted for UAE. She underwent bilateral uterine artery embolization using polyvinyl alcohol particles of 300-350µm under fluoroscopic guidance until near complete stasis of blood flow. She had an uneventful post-procedure course with no history of fever, bleeding or discharge vaginally. Her heavy menstrual bleeding and dysmenorrhea gradually reduced 2 months post procedure and were eventually completely relieved. At the monthly follow-up ultrasounds the fibroid size remained the same up to three months post-procedure. By nine months post UAE the uterine volume had reduced by 83.7% to 65cc and the largest fibroid volume had reduced by 94.3% to 2.2cc. She conceived spontaneously two years after UAE and registered at our hospital antenatally at 10 weeks of gestation. She had an uneventful antenatal course. However, at 31 weeks she was diagnosed to have grade 2 anterior placenta previa. At 34 weeks gestation she developed bleeding per vaginum with fetal distress. Hence, an emergency lower segment cesarean section was undertaken. She delivered a 2.2 kg male child with an Apgar score of 9/10. Intra-operatively, the placenta was extensive, spreading from the fundus into the lower segment up to 2 cm from the internal os. It was unhealthy, calcified and ragged and had to be delivered out piecemeal. Fortunately, there was no bleeding from the placental bed, no postpartum hemorrhage and she did not require blood transfusion. The uterus was larger than a normal postpartum uterus (24 weeks size) probably due to small intramural fibroids. A small seedling fibroid on the posterior wall was noted. Uterine cavity was regular and there were no areas of myometrial thinning. Her post-operative period was uneventful and she was discharged on day 7. 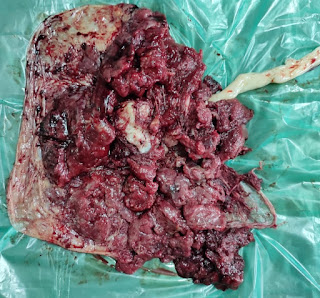 Uterine artery embolization for treatment of symptomatic fibroids was first reported by Ravina et al in 1995.[1] Today it is an established treatment option in women who do not want to undergo surgery. Relief of symptoms in 80-90% of women along with a reduction in the fibroid volume of 40-70% is seen at the end of one year.[2] In this case there was a stupendous response with complete relief of symptoms and a reduction in fibroid volume by 94.3%. While there is no dilemma for women who have completed their families, experts deem it prudent to be cautious while offering this procedure to women who want to conceive in the future. The primary concern was UAE causing premature ovarian failure and hence infertility as suggested by earlier reports.[3] However, a better designed study refuted these claims and showed that ovarian function remained unaltered, especially in women younger than 40 years of age.[4] Indeed, there are several reports of successful pregnancies, most of them spontaneously conceived, as was seen in this case.[5-7] There is limited evidence on comparative fertility outcomes post myomectomy and UAE. In a randomized controlled trial, Mara et al have reported a comparable pregnancy rate in both groups.[8]There are concerns regarding compromised decidual blood supply which may result in adverse pregnancy events such as implantation failure, miscarriage and intrauterine growth restriction. The miscarriage rate in the UAE group was significantly higher than the myomectomy group.[8] However, these complications are also primarily associated with fibroids in pregnancy and hence to attribute them entirely to UAE may be erroneous. As in this case, pregnancy continued into the third trimester without hormonal support and delivered an appropriate for gestational age baby. An increased incidence of placenta previa and adherent placenta in pregnancies after UAE has been reported.[7] This may be due to denudation of the endometrium as reported in a study that visualized the uterine cavity hysteroscopically post UAE.[9] This case had grade 2 anterior placenta previa without adherence. Another anticipated complication is the risk of uterine rupture during pregnancy due to myometrial ischemia. However, there have been no such reported cases and this may be one of the advantages of UAE over myomectomy. In this case, integrity of the uterus was maintained and there were no areas of myometrial thinning as seen intra operatively. There are no definitive guidelines regarding the appropriate time to wait until conception so that healing occurs after UAE. It is generally recommended to wait for 3-6 months after myomectomy.

UAE is a promising modality of treatment for women with symptomatic fibroids who wish to retain their fertility. However, until more robust studies prove its safety for pregnancy, women should be cautioned regarding the risks of miscarriage and abnormal placentation. It may be a viable option for young women with multiple, scattered fibroids, small and large, where myomectomy may be difficult and could potentially end up in a hysterectomy or massive blood loss as in this case. Thus, careful patient selection is the key.