The appendix, auricular muscles, wisdom teeth, the caudal bone and the semilunar fold are few of the many putative vestigial structures as described by the famous biologist Charles Darwin in literature. The human tail is usually considered as a marker of underlying pathology of occult spinal dysraphism. It is also associated with medical and social implications that require timely intervention and holistic approach for treatment.

There are only 40 cases of true human tails reported in the medical literature.[1] We report an interesting case of a vestigial tail detected after birth in a newborn and its management. Interestingly the antenatal malformation scan revealed no structural abnormality and in the post natal period baby did not have any neurological abnormality or externally visible spinal cord defect but the radiological imaging was suggestive of a probable lipomeningcoele.

We report a case of a gravid 3 para 2 living 2 with no antenatal high risk factors. She had a normal malformation ultrasound scan.  She had a full term normal vaginal delivery and delivered a male child of 3 kg. Neonate had a 3 x 3 cm midline swelling in the sacral region of the spinal cord. It was soft compressible with normal overlying skin. There was no evidence of hair tufts or dimpling or nevus [ Figure 1 and 2]. Baby was conscious, playful, and was moving all four limbs. There were no neurological abnormalities. Ultrasound done on day 5 of life was suggestive of 2.4 x 1.3 x 1.7 cm lesion in the sacral region. Lesion was filled with fat and fluid and it had a communication with the spinal cord. The most likely diagnosis was that of a lipomeningocele extending into the spinal canal with tethered and thickened filum terminale. Baby was evaluated by the neurosurgeons and was operated on day 10 postnatally where the lesion was excised and tethered cord was released and baby was observed for 10 days and was discharged. The histopathology report was also suggestive of a lipomeningcoele. 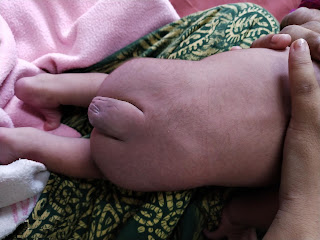 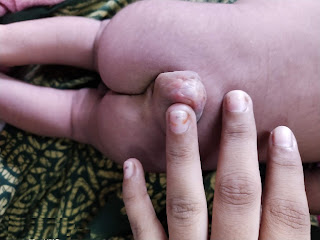 Human tail is an idiosyncratic entity with a cosmetic issue that presents as an adjunct structure in the lumbosacral region. They are usually classified as true tails and pseudo tails. Spinal dysraphism is a common anomaly associated with the tails. Embryological study reveals that the human tail which is present at 5th week of gestation disappears by the 8th week of intrauterine life and is formed on 11-12 vertebrae. The most distal remnant of the embryonic tail gives origin to the true human tail. Connective tissue, striated muscles, adipose tissue and blood vessels are the chief histological components of the true tail. It is deficient in notochord, spinal cord, bone and cartilage. A true human tail is easily removed surgically without any residual disease. Pseudo tails superficially resemble true tails. Human tails most commonly arise in the lumbosacral region.[2]
Lipomeningocele is a type of closed neural tube defect with adverse neurological sequele secondary to an inherent tethered spinal cord. Around 0.3 and 0.6 per 10,000 live births is the prevalence of lipomeningocele and lipomeningomyelocele in the general population respectively.[3] Lipomyelomeningocele is characterized by a subcutaneous lipoma located in the lumbar or sacral region. The most common symptom is a clinically apparent fatty mass positioned in the midline or off the midline in the lumbosacral region.The lumboscaral fascial defect restricts the axial growth of conus medullaris leading to tethered spinal cord causing neurological and urinary functional deficits.[4] It may be difficult to detect lipomyelomeningocele by ultrasonography if the spine lies adjacent to the uterus.  Magnetic resonance imaging is useful in identifying fatty mass and presence of spinal cord tethering. Additional specialized testing such as urodynamic function studies and neurophysiological monitoring may be beneficial in evaluation of these patients to assist with timing of surgical intervention. Surgical management of the human tail depends on the presence or absence of associated anomalies on the MRI. A true human tail is considered as a failure of regression in fetal life and can be treated by simple excision whereas a pseudo tail is associated with an underlying anomaly thus requiring an extensive surgery which involves the excision of the lesion with correction of the anomaly leading to the tethered cord. In our case, it was a pseudo tail as it had anomalous communication with the spinal cord. If the neurological symptoms allow, surgery can be withheld for 3 months or until the baby has reached 5 kg weight.[5] The cardinal steps in lipomyelomeningocele repair involve resection of the adipose mass, defect identification in the lumbosacral fascia, release of the filum terminale with the aim to preserve the neural elements. Further care should be taken to prevent the tethering of the spinal cord. Lipomeningomyelocele is a form of closed neural tube defect with the risk of worsening neurological and urological function secondary to tethered spinal cord and hence requires timely intervention.