Tubal ectopic gestation usually presents in the first trimester, most commonly at or before 7-8 weeks. It tends to rupture after 7 weeks. A case of an unusually large ectopic pregnancy is presented.

An ectopic pregnancy is the commonest life-threatening condition encountered in early pregnancy.[1] Most of these are in the fallopian tube - 2.5% in the interstitial part, 12% in the isthmic part, 70% in the ampullary part, 4% in the infundibular part and 11.5% in the fimbria. With modern methods of diagnosis using ultrasonography (USG) and serum β-hCG level estimation, most of these can be diagnosed before they rupture. If not, they rupture, usually at or after 7 weeks of gestation.[2,3] Unruptured large tubal ectopic pregnancies are rare because the tubal wall has thin musculature and it cannot sustain growth of a pregnancy beyond 6-7 weeks. A very unusual case of a large unruptured tubal ectopic pregnancy in the second trimester is presented. Review of the literature shows that it is the second largest tubal ectopic pregnancy reported so far.

A 31 year old woman, para 1 with a 6 year old child, presented with 4 months of amenorrhea, pain in the central and lower abdomen for 2 days and mild vaginal bleeding for 6 hours. She had a normal delivery 6 years ago. Her past menstrual cycles were regular, every 28-30 days, with moderate flow and mild pain. Her last menstrual period had been about 4 months ago, though she was not very sure of the exact date of the same. Her past surgical and medical history was not contributory. She was not using any form of contraception. Her abdominal pain was dull aching in nature, without any relation to food, defecation, urination, and flatulence. Her general and systemic examination findings were in the normal range. Her pulse rate was 70/min, respiratory rate 18/min, temperature normal, and blood pressure 110/70 mm Hg. She had mild pallor. An abdominal examination showed a 20 weeks’ size cystic-solid lump arising from the pelvis, mobile from the side to side. The cervix was tubular, the os was closed, and the uterus was enlarged, in continuity with the palpable mass. There was no tenderness anywhere in the abdomen.

Her urine pregnancy test was positive. USG showed an enlarged and empty uterus, and an unruptured left tubal ectopic pregnancy of 16 weeks, sitting on top of the uterus. A bicornuate uterus with a rudimentary horn was suspected clinically, as tubal pregnancies are not known to enlarge to such a size. Hence a magnetic resonance imaging (MRI) scan was obtained. It confirmed the diagnosis of unruptured left tubal ectopic pregnancy. Her haemoglobin was 10.1 g/dl. Her investigations for fitness for anesthesia showed normal results. An exploratory laparotomy was done. It showed a 10 cm diameter cystic mass with translucent and thin walls above the uterus and attached to it (figure 1). Omentum was adherent to its top, posterior and anterior surfaces. Sigmoid colon was adherent to the lower part of its posterior surface. The omental adhesions were divided between hemostats and ligated. The mass was separated from the sigmoid colon easily. The mass was in continuity with the isthmic portion of the left fallopian tube. The left ovary and the right ovary and fallopian tube were normal. The fetus could be seen in the cystic mass. A diagnosis of unruptured left ampullary tubal ectopic pregnancy was made. It was excised by performing lateral salpingectomy. Examination of the excised mass showed a fetus with crown-rump length of 12.3 cm. It had no external anomalies. The patient’s recovery from the surgery was uneventful. Histopathological examination showed that it was a tubal ectopic gestation. 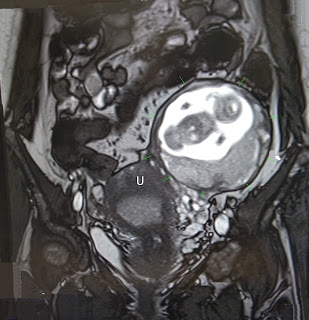 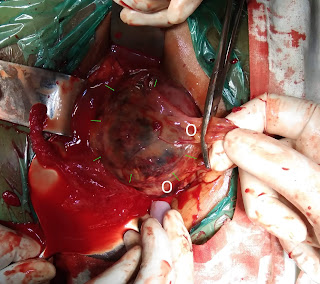 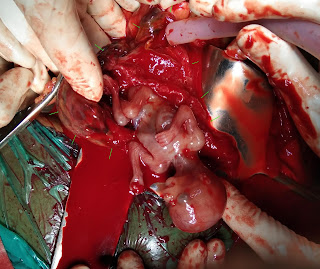 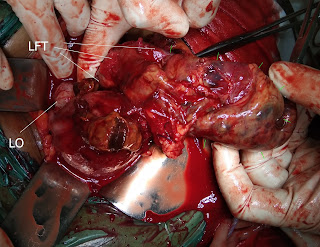 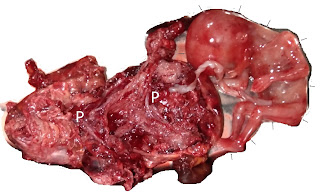 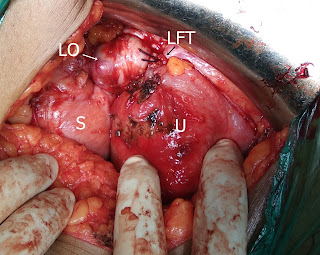 With the help of USG and serum β-hCG assay, it is now possible to diagnose an unruptured ectopic pregnancy early. Most of the cases so diagnosed are at 6.9 ± 1.9 weeks.[3] The tubal musculature is thin and cannot support an enlarging pregnancy much beyond 9 weeks of gestation.[3] It is extremely unusual for a tubal pregnancy to continue into the second trimester. The largest tubal ectopic gestation reported so far was of 18 weeks of gestation.[4] The second largest one was of 15 weeks.[5] The crown-rump length of the fetus in the case reported here was 12.3 cm, which corresponded to 16-17 weeks of gestation. Thus this becomes the second largest tubal ectopic pregnancy reported in the literature so far. Its walls were almost transparent, because the tube had been expanded a lot and was near the point of rupture.

Presence of a very large ectopic gestation suggests that the location would be either in a rudimentary horn of a bicornuate uterus (which technically would be an intrauterine pregnancy, but by behavior – a rupture - an ectopic pregnancy) or an abdominal ectopic pregnancy. This case is presented to make the readers aware that tubal ectopic gestations can present even in the second trimester, and in doubtful cases, MRI should be used to make the diagnosis.[6,7]

In case of resource poor countries with nonavailability of investigations like USG and MRI at some places, such a pregnancy can be easily mistaken for an intrauterine pregnancy, and the results can be catastrophic if it is allowed to grow – since it will always rupture. The results will be equally catastrophic if a second trimester termination of pregnancy is attempted using misoprostol or carboprost tromethamine.

I thank Dr Sarika Solanke for taking photographs of the MRI scan and operative findings.