Tuberculosis is a very common infectious disease in a developing country like India. It involves almost all tissues and organs. It affects all age group, especially children and reproductive age group. Here we are presenting a case of a 20 year old female with disseminated tuberculosis with ovarian mass which had many differentials such as tuberculous ovarian mass, malignant or benign ovarian tumor, metastatic tumor.

A 20-year-old female, unmarried, nulligravida came to gynecology OPD with complaint of abdominal distension. She was relatively asymptomatic before 1 year. then She then developed abdominal distension of gradual onset and weight loss of 5 kg. Ultrasound (USG) pelvis was done which was suggestive of a large abdominopelvic cystic lesion extending up to the sub hepatic region of size 24×21.5×17.5 cm. CA125 was 231 U/ml. So, she went to a cancer hospital to rule out malignancy.  PET CT whole body scan was done. It was suggestive of an abdominopelvic cystic lesion, mild ascites, omental and peritoneal irregular nodularity suggestive of peritoneal carcinomatosis, necrotic lymphadenopathy in bilateral axilla, mediastinum, gastrohepatic region. Possibility of metastatic lymph nodes was considered. Bilateral pleural effusion, D8 lytic lesion in the 8th vertebra was seen and it was suggestive of disseminated tuberculosis. Ascitic tap for malignancy was negative.  Diagnosis of TB was further confirmed by axillary lymph node biopsy. It was suggestive of granulomatous inflammation. Gene Xpert was positive for mycobacterium tuberculosis (MTB). Category 1 anti-Koch’s therapy (AKT) was started. After 6 months of AKT treatment, PET CT scan of the whole body was repeated. It showed resolution of axillary lymph nodes, and reduction in the paravertebral soft tissue lesion. However, there was partial decrease in size of the large abdominopelvic cystic lesion. Repeat CA 125 was 23 U/ml (within normal limit). Repeat gene Xpert and MGIT of axillary lymph nodes was negative for MTB. Ovarian cyst fluid aspiration was negative for MTB on gene Xpert and MGIT. It was also negative for malignancy. Thus, she was referred to gynecology OPD for ovarian tuberculous abscess not responding to AKT and for its surgical management as AKT drugs were not penetrating the abscess wall.
On general examination, she was underweight and pallor was present. On per abdominal examination, mass of 28 weeks filling the lower abdomen was felt. It had a doughy feel and had side to side mobility. Per vaginum and per speculum examination were not done as she never had been sexually active. On per rectal examination the cyst was felt arising from the left side of the pelvis.
An exploratory laparotomy was performed. Intraoperatively, a large left ovarian mass of approximately 26×15×15 cm, cystic, adherent to parietal peritoneum by flimsy adhesions was found. Adhesions were separated by blunt and sharp dissection. Cyst was isolated to prevent spillage and fluid was aspirated with needle and syringe to reduce the volume of the cyst. Caseous material was expected but mucinous fluid was obtained. It was sent for gene xpert, MTB assay, cytology, culture and sensitivity, AFB culture, and MGIT.
Uterus was normal in size. Right ovary and fallopian tube were normal. Left ovarian tube was adherent to this left ovarian cyst. No tubercles were seen over the uterus, ovaries, fallopian tube, pouch of Douglas, or uterosacral ligaments. Also, there was no evidence of tubercles, strictures on small bowel and colon nor any evidence of enlarged mesenteric lymph nodes. 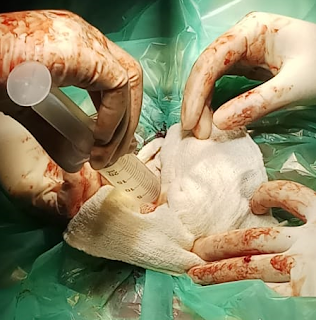 Figure 1. Aspiration of the Cyst after isolation with needle and syringe. 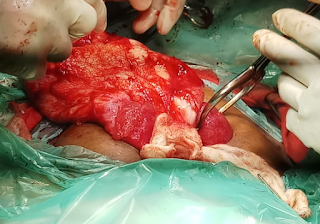 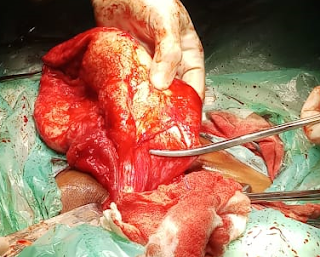 Figure 3. Clamp on the pedicle of the neoplasm. 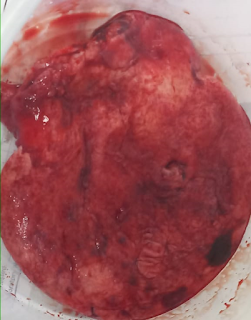 With respect to tuberculosis, genitourinary system forms the second most favorable site after lymphatic system for extra-pulmonary TB. Tuberculosis mostly affects women of reproductive age group between 20-30 years of age residing in endemic zone. However, owing to increased immigration and travel its occurrence has become worldwide.[1,2]
Pelvic tuberculosis usually has symptoms which are nonspecific, and laboratory and clinical findings overlap with ovarian malignancy as seen in our patient with pelvic tuberculosis who had weight loss and abdominal pain associated with increased tumor marker levels, the presence of ascites, and an ovarian mass. The treatment of pelvic tuberculosis is mostly medical. However, it is difficult to distinguish pelvic tuberculosis from ovarian malignancy since there are limited investigating resources to differentiate between these two.
Imaging is of little help in differentiating ovarian malignancy from tubercular lesion as they have similar appearance on USG, CT and MRI scans.  Genital tuberculosis can be easily confused with peritoneal carcinomatosis or advanced ovarian cancer.
Recent advance in laparoscopy has helped greatly in making the diagnosis of tuberculosis in more than 97% cases so as to avoid laparotomy.[3,4] An 8F-FDG PET/CT is a sensitive method for the detection, staging, assessing disease activity and monitoring therapy in disseminated tuberculosis.[5] Though the use of laparoscopic surgery has also been associated with complications in patients with pelvic tuberculosis, and laparoscopic findings can resemble those of metastatic ovarian cancer it is still a valuable diagnostic tool . Similarly in open surgery the macroscopic appearance of pelvic tuberculosis can be similar to carcinomatosis of extraovarian carcinoma making it difficult to differentiate the two.[2]
In our case, decision of laparotomy was driven by various reasons one being that there was a cytology report that was negative for malignancy as well as tuberculosis, and second reason was that in spite of the patient being on AKT, there was no significant reduction in the mass which was believed to be due to poor penetration of the drugs.
Benign ovarian tumors mostly occur between 20 and 40 years of age, while the malignant ovarian tumors commonly involve women above 40 years of age. The most common ovarian tumors are serous cystadenoma (29.9 %), followed by mature teratoma (15.9 %) and mucinous cystadenoma (11.1 %). Serous cystadenocarcinoma is the predominant malignant tumor (11.3 %).[6]
Mucinous tumors have a spectrum of being malignant, benign, borderline, and invasive variants. Among benign ovarian neoplasms, mucinous cystadenomas are found in approximately 10–15 % of all cases. Borderline tumors, or tumors of low malignant potential, are more common (67 %) than invasive primary mucinous ovarian carcinomas. Mucinous cystadenomas usually occur as a large, mucus containing cystic mass commonly in the 20-40 years of age group.[7] But it can occur in adolescent, premenarchal girls, as well as postmenopausal patients. The mean size at presentation is 18 cm, filling entire abdominopelvic cavity and occasionally presenting with ureteral obstruction or abdominal compartment syndrome.[8,9] The large size is typical of mucinous histology.

In a diagnosed case of disseminated tuberculosis with ovarian mass it is prudent to evaluate the lesion carefully as ovarian malignancy or neoplasm can coexist with tuberculosis.