Tubal sterilization is the commonest method of permanent contraception in many countries. Unfortunately it is never 100% effective. There are various reasons for failure. Spontaneous fallopian tubal lumen regeneration is the mechanism when a failure occurs despite adoption of a correct technique at recommended time of the operation. An unusual such case is presented here.

Tubal sterilization is the method of contraception adopted by most couples which have completed their families. It is popular because it is convenient, quite effective, does not involve continued use of a contraceptive method actively and does not interfere with the sexual function. However it can fail due to a number of reasons. It can  fail even when the timing of the operation and method of performing the operation are correct. This can be due to spontaneous fallopian tubal lumen regeneration which may be due to recanalization or tuboperitoneal fistula formation. Usually the appearance of tubal recanalization is like that of a fallopian tube in continuity of the two segments, though the length of the tube is somewhat shortened due to loss related to the procedure. An unusual appearance of a case of spontaneous tubal recanalization is presented.

A 45 year old woman was scheduled to undergo an abdominal hysterectomy for uterine leiomyomas causing abnormal uterine bleeding (excessive blood flow). She had three vaginal deliveries and had undergone a puerperal tubal sterilization operation as a permanent method of contraception 18 years ago. She did not conceive any time after the procedure. Her medical and surgical history was not contributory. Her general and systemic examination showed normal findings. Gynaecological examination showed uniform enlargement of the uterus to 16 weeks’ size. The vagina was normal. There were no adnexal masses. Her investigations for fitness for anesthesia had normal results. She underwent a laparotomy under spinal anesthesia. The uterus was found to be enlarged to a size of 20 cm in length and 10 cm in circumference of the corpus. The right fallopian tube showed two segments of the fallopian tube connected to each other in the mesosalpinx by a narrow tubular porion measuring 1 mm in diameter. It was supplied by mesosalpingeal vessels (figure 1). The left fallopian tube showed two segments of the fallopian tube separated by a free fold of mesosalpinx, as after Pomeroy’s sterilization. Total hysterectomy with bilateral salpingectomy was performed without any difficulty. The patient made an uneventful recovery. Histopathological examination confirmed the diagnosis of uterine leiomyoma. Examination of the tubular segment connecting the two segments of the right fallopian tube showed the appearance of a fallopian tube, which was much narrower in lumen size and wall thickness than a normal fallopian tube. 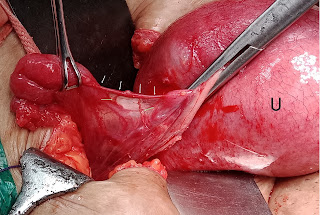 Failure of tubal sterilization may be due to performing the procedure at a wrong time, using a method with an inherent high failure rate, faulty technique, and tubal lumen regeneration. Failure rates are higher when the procedure is performed with a cesarean section or in puerperium or postabortal period as compared to when performed postmenstrually.[1,2] Tubal lumen regeneration occurs despite adopting a correct technique at the right time, though it may occur more frequently if the cut ends of the tube are kept in contact with each other, as with modified Madlener’s method or using delayed absorbable suture for Pomeroy’s method. Tubal lumen regeneration is more often due to tuboperitoneal fistula formation and less often due to tubal recanalization which joins the two separated segments of the fallopian tube. Tubo-peritoneal fistula formation occurs less often with mechanical tubal occlusive methods than with use of electrocauterization.[3-5] Tubal recanalization may be dependent on some promoting factors like increased healing tendency of some women, tubal vascularity and pre-existing proliferative condition of the tubal epithelium.[4,6-8] Most of the failures occurring within one year of the procedure are due to a failure to occude the tubal lumen completely. Most of the later failures are due to tubal lumen regeneration.[9] Soderstrom found that tubal patency rates were 1-2% at 3 months after the procedure and 16% at 5 years.[10] Tubal patency after a tubal sterilization procedure is often far in excess of occurrence of intrauterine or tubal ectopic pregnancies after the sterilization procedure.[11-15] This may be due to infertility caused by other factors. Such cases do not come to light. The case presented was detected accidentally while performing an abdominal hysterectomy for a leiomyomatous uterus causing abnormal uterine bleeding. It was noticed particularly because of its unusual appearance. Usually the recanalized tube is seen as a shorter tube with some or no narrowing at the site of the recanalization. This case was unusually in that there was a 2 cm long segment of patent tube which was 1 mm in diameter. It was well vascularised. If the woman had conceived, she would most probably have developed a tubal ectopic pregnancy lateral to this narrow segment.