Anatomical aberration in the development of organs leads to their development at an abnormal anatomical site. Such aberrations are seen in various organs resulting in development of accessory breasts, accessory pancreas, accessory spleen, accessory ovaries and so on. All these are rare entities, Accessory ovary being extremely rare. Accessory ovary may either develop at the time of embryogenesis due to separation during migration or it may develop in a normal adult ovary due to trauma caused by an inflammatory process or during surgery.[1,2] Our patient is a case of bilateral ovarian cysts who at the time of exploratory laparotomy was incidentally found to have an accessory ovary like tissue near the normal left ovary but separate from it.

Accessory ovary is defined as a part of ovarian tissue situated close to but connected (at least by the vascularity) to the normal ovary. It is a rare condition with incidence of 1:29,000-700,000 in indoor patients. Anomalies of other organs can coexist with an accessory ovary. In the genital system defects seen are accessory Fallopian tubes, uterus didelphys, septate uterus, and unicornuate uterus. Urinary system anomalies seen are bladder diverticulum, agenesis of unilateral kidney, ureter, accessory suprarenal gland. Gastrointestinal system may show presence of a lobulated liver or accessory pancreas.[3] Incidence of such an association is 36%. Accessory ovaries are usually detected incidentally at laparotomies done for other pathologies as they themselves are most often asymptomatic.[4]

A 24 year old nulligravida, married since one year, came to the gynecology outpatient department with complaints of pain in lower abdomen and an ultrasononography report suggestive of bilateral ovarian cysts. She had regular menses which lasted for 4-5 days each cycle and came every 28-30 days with moderate flow without any associated dysmenorrhea. On examination, general and systemic examination was within normal limits. On abdominal examination, a 16week size mass was palpable in the left iliac fossa, cystic in consistency, mobile, and non tender. On vaginal examination, a 16-18wk size mass was palpable, well differentiated from the uterus, non tender, and mobile. Patient was admitted for evaluation. A repeat pelvic ultrasound was suggestive of a large cystic lesion measuring 6.0 cm * 5.5 cm in the right adnexa with a fat containing component measuring 4 cm * 3.5 cm within the cyst with calcification. There was no evidence of torsion. All these features suggested a dermoid cyst arising from the right ovary. Another large clear cyst measuring 11 cm * 9.9 cm was noted in the pelvis adjacent to the above cyst. Left ovary was normal. Right ovary was not identified. A computed tomography examination of the pelvis confirmed the presence of a right ovarian dermoid cyst and a left ovarian cyst. An exploratory laparotomy with left ovarian cystectomy and right ovarian dermoid enucleation with bilateral ovarian reconstruction was done under spinal plus epidural anesthesia. Intraoperative findings revealed a 10 cm * 11 cm * 12 cm paraoophoron cyst in the left adnexa which was seen anterior to the uterus as shown in Fig 1. Uterus was normal in size and left Fallopian tube was stretched over the cyst. Left ovary was normal. Right ovary, with a right ovarian dermoid cyst of about 4 cm * 5 cm * 5 cm was also noted which was seen posterior to the uterus. A small 2 cm * 1 cm * 1 cm ovarian like tissue was seen in the left ovary at the junction of the fimbriae and the left paraoophoron cyst. It was seen separately from the normal left ovarian tissue suggestive of an accessory ovary as shown in the figure 1. 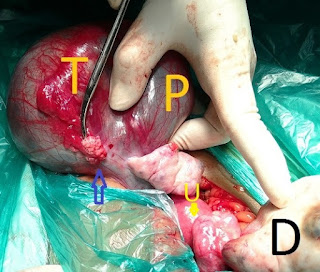 A biopsy was taken from this ovarian like tissue and sent for histopathological examination which revealed mature ovarian parenchyma with stroma thus confirming the finding of an accessory ovary. Post operative period was uneventful.

Accessory ovary, as defined above was first described by Grobe in 1864. Development of an accessory ovary during embryogenesis as a result of separation during migration was explained. Lachman and Berman had an alternative point of view and said accessory ovaries are actually implants caused by trauma and are not of embryological origin.[2] Tumors arising in an accessory ovary are extremely rare but reports of various tumors like cystadenoma (serous or mucinous), dermoid cyst, Brenner tumor, steroid cell tumor are available. This suggests that the various types of tumours seen in an accessory ovary are similar to those seen in a normal ovary.[5] In our case, accessory ovary was an incidental finding and was detected due to the symptomatic bilateral ovarian cysts. We did not find any abnormalities in the Fallopian tubes, uterus. The accessory ovary did not appear to be associated with any other anomalies in other systems. In summary, accessory ovary is a rare under reported condition which should be looked for at exploratory laparotomies and if noticed we should be vigilant about any other anomalies associated with it. This condition is associated with a high risk of pelvic and renal anomalies and should lead to further evaluation in order to advise patients about future reproductive function and management of congenital anomalies. These accessory ovary can be a source for the development of neoplasm. The clinicians should document their presence for future reference.