Recurrent Hematometra And Hematocolpos Due To Cervical Agenesis

Cervical agenesis or aplasia is a rare Mullerian anomaly with incidence of 1 in 80,000 to 1,00,000 live births.[1] It is classified as Class IB Mullerian anomaly under American Fertility Society Classification.[2] The cervix is absent, and the lower uterine segment narrows to terminate in the peritoneal sleeve at a point above the normal communication with the vaginal apex. It is often associated with absence of portion or all of the vagina. We report a case of recurrent hematometra and hematocolpos due to cervical agenesis.

A 19 year old unmarried girl was admitted to our tertiary center two years ago in view of primary amenorrhea and cyclical abdominal pain. General examination findings were normal and secondary sexual characteristics were well developed. On abdominal examination, a cystic mobile mass of 16-18 weeks' size was palpable. On local examination, pin point vaginal orifice was noted with no features suggestive of imperforate hymen. Ultrasound was suggestive of hematometra with right ovarian chocolate cyst of 6 × 5 cm. Magnetic Resolution Imaging (MRI) was suggestive of hematometra probably due to cervical stenosis with 5.2 cm right ovarian chocolate cyst. Tentative diagnosis was made as transverse vaginal septum. Resection of transverse vaginal septum through a very narrow introitus, with drainage of uterine collection (hematometra) was done. Cervix was not felt on examination. Foley's catheter was inserted into the cavity of hematometra and was distended to keep the cavity patent. One week later, examination under anesthesia was done with removal of Foley's catheter. On per vaginal examination, vaginal opening of one finger size was felt through vaginal septum. Uterus was felt but cervix was not palpable. Patient and her parents were counseled about poor prognosis in view of cervical stenosis and were asked to follow up as the definitive plan in this case was hysterectomy.
However patient did not follow up and presented two years later with progressively increasing dysmenorrhea, and lower abdominal pain in between the cycles. She gave history of menstrual cycles occurring every 15 - 20 days, lasting for 5 to 7 days. General examination was unremarkable. On abdominal examination, mild tenderness was present but no mass was felt. On per rectal examination, uterus was 6 weeks' size, anteverted, with restricted mobility. No forniceal mass was felt. Her baseline routine investigations were normal. MRI revealed hematometra with right sided distal hematosalpinx measuring 3.2 cm in diameter. Bilateral kidneys were normal. 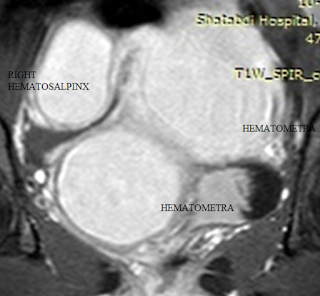 Exploratory laparotomy with subtotal hysterectomy was done. Intraoperatively, uterus was 10 weeks' size, bilateral fallopian tubes were normal, left ovary was normal. A right ovarian endometriotic cyst of 4 × 4 cm was seen with omental adhesions. This was enucleated, fulgurated and the ovary was reconstructed. Upper vagina was distended with blood (hematocolpos) ending blindly, indicative of partial vaginal agenesis. During hysterectomy, after applying clamps at the junction of cervix and vagina, uterine cavity was opened and 20 ml of chocolate coloured fluid was drained from uterine cavity and upper vagina. Cavity was examined. Findings were suggestive of absence of cervix and presence of blind and ballooned out vaginal pouch. 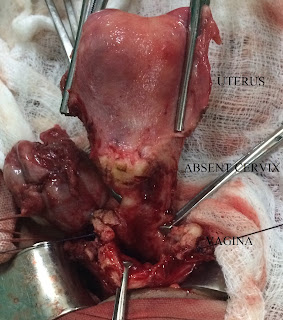 Histopathological report was suggestive of endometrium in proliferative phase, unremarkable myometrium with absence of ectocervix and focal thinning of endometrium at endocervix. Post operative course was uneventful. GnRH agonist injection Luprolide acetate 3.75 mg intramuscularly was given at monthly interval for three months. Patient has been counseled and advised a vaginoplasty prior to marriage.

Cervical agenesis is the absence of cervix. Milder forms, in which the cervix is deformed and nonfunctional, are known as cervical atresia or cervical dysgenesis. These anomalies (complete agenesis and dysgenesis) are classified as type IB in the American Fertility Society Classification of Mullerian anomalies. According to EAC classification, it is classified as "Cx no fn, obst". [3]
Cervical atresia occurs due to defect in the elongation and canalization of Mullerian duct. Diagnosis is based on history, clinical examination, ultrasonography; confirmed by magnetic resonance imaging. Patients affected by this anomaly have normal secondary sexual development, and usually present at the time of puberty with primary amenorrhoea. As these cases have a functional uterus, they present with cyclical abdominal or pelvic pain due to hematometra. They may also have history of recurrent surgeries, as illustrated in this case. Vaginal atresia and renal tract anomalies such as renal agenesis, ectopic kidneys and malrotation are commonly associated.[4]
Conservative management in the form of laparoscopic uterovaginal anastomosis is considered as the first line of management but it should be done in highly specialized unit with the help of experts in laparoscopic surgery and management of complex Mullerian anomalies.[5] This was not possible in our case due to complete cervical agenesis. Also the procedure to make a channel in the blind vagina was tried previously in our case, but failed, leading again to hematocolpos, hematometra and endometriotic cyst in the ovary; hence definitive management that is hysterectomy was done instead of conservative management like uterovaginal anastomosis. Preoperative urography should be done to rule out associated anomalies in the kidney. Complications like endometritis, pelvic inflammatory disease, persistent pelvic pain, bowel and bladder injury, repeated surgeries and even death have been reported in the literature following reconstructive surgeries. Creation of the new vagina and cervix is a complex procedure associated with high morbidity in the form of sepsis and resultant restenosis due to fibrosis . In nearly 50% of cases cervical agenesis is associated with vaginal atresia and it is difficult to make a satisfactory fistulous tract, as in our case. Our patient developed hematometra and hematocolpos secondary to fibrosis and closure of the original surgical opening created between uterus and blind vaginal pouch. Several factors such as size of the created channel, duration of its stenting, presence of rudimentary endocervical glands and native vagina adjacent to the created channel and the number of menses allowed to flow through the stented channel may influence the surgical outcome. [6]
To conclude, though a reconstructive procedure in the form of cervicovaginal anastamosis is preferable, it can result in repeat hematometra formation ultimately requiring hysterectomy. Hysterectomy is warranted in extreme cases like this, as it saves repeated morbid procedures as well as financial and psychological burden.