Situs inversus is a rare congenital anomaly where there is a reversal placement of various thoracic and abdominal organs from their normal anatomical location. 5-6 % of people with Situs inverses have heart defect & 20 - 25 % are associated with Kartagener's Syndrome. In most of the cases patients of these conditions are apparently normal and detected accidentally. However, due to presence of pre-existing cardiovascular or respiratory problems these individuals are prone to catch various infections. These individuals also have risk for sudden death. Here we present a rare case of situs inversus totalis detected accidentally in second full-term pregnancy.

Situs inversus is a rare congenital anomaly in which there is reversal placement of various thoracic and abdominal organs. In Situs inversus totalis, mirror image of the anatomic location of all the viscera occurs while in dextrocardia only the apex of the heart points to right and is present in the right hemi thorax. [1] When Situs inversus is associated with sinusitis and bronchiectasis, it constitutes Kartagener’s syndrome.[2]

A 31 years old patient, married since 10 years, gravida 4, living 1, spontaneous abortion 2, with 40 weeks of gestation with previous lower segment cesarean section done, was admitted in our tertiary care hospital in latent phase of labour. On admission patient was complaining of pain in abdomen with no complaints of bleeding or leaking per vaginum. She had a female child of 5 years, delivered at term by emergency lower segment caesarean section (LSCS) done in view of cephalopelvic disproportion. There was no history of intraoperative or post-operative complication. Second and third pregnancies ended as spontaneous abortions. Dilatation and curettage was not done both the time. Gravida 4 - present pregnancy, patient was registered at peripheral hospital and she had no history of any complications in this pregnancy. On admission – vital parameters were normal, cardiovascular system- both heart sounds were heard more prominently on right fifth intercostal space, no murmur was heard, Respiratory system - clear, air entry bilaterally equal. Per abdomen-uterus full term, vertex presentation, fetal heart rate 140 bpm, was getting minimal uterine activity, previous lower segment pfannenstiel scar was present, and no scar tenderness was noted. Per vagina - cervical os - one finger loose, 30 % effaced, vertex presentation, with bilateral convergent wall suggestive of mid pelvic contraction. Decision of emergency lower segment caesarean section (LSCS) was taken in view of cephalopelvic disproportion after cardiac evaluation. Twelve lead Electrocardiogram was done suggestive of inversion of T waves in aVL, v 1- v 6. Cardiac reference was done and 2D-ECHO was advised. Echocardiography confirmed dextrocardia with normal cardiac valve areas and normal size ventricle and atria with ejection fraction of 60%, no PAH, no evidence of vegetation. Fitness for emergency lower segment caesarean section was given by cardiologist. Ultrasonography of abdomen was advised and was suggestive of situs inversus-large lobe of liver in left hypochondria, gallbladder in left hypochondria, and spleen in right hypochondria. Emergency LSCS was done under spinal anaesthesia, no intraoperative complication occurred. Intraoperative large lobe of liver in left hypochondria was noted. Patient was monitored postoperatively, no complication occurred. In Postoperative period X-ray chest of mother and baby was done, mother’s X-ray was again suggestive of situs inversus (pic-1). X-ray chest of baby was normal. Patient was discharged on day 5 of LSCS. Patient was informed regarding the complication that can occur with situs inversus and screening of other family member was advised. 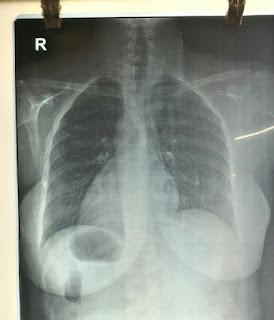 Figure 1. Chest radiograph showing dextrocardia with fundic bubble of stomach on right side.

The exact incidence of situs inverses is not known because most of the patient remains asymptomatic. It is 0.01% approximately.
Types of sites inverses:
Situs inverses totals: Generally, there are no complications associated with situs inversus totalis because the organs are just reversed. Patient can remain asymptomatic but situs inversus totalis may also be associated with some other rare conditions. 5 - 6 % people with situs inversus totalis suffers from congenital heart disease. 20 - 25 %of patients with situs inversus totalis have Kartagener Syndrome. Patient with Kartagener Syndrome also have to face problems of abnormal bronchioles of the lungs and male infertility.
Dextrocardia is a congenital condition in which only heart is located on the right side of the chest. Left lung is smaller than the right lung. People may live normally, however few may suffer from additional congenital heart abnormalities like transposition of the great arteries. [3]
Situs ambiguous occurs in one in 20,000 births. In situs ambiguous, both liver and stomach develops in centre, stomach remains behind the liver. [4]
In case if situs inversus is diagnosed at autopsy, [5] then other family members should be counselled and are advised for screening, as they are prone to have various cardiac abnormalities.
If it is diagnosed during lifetime, the dangers of smoking and fumes should be told as they are at high risk for development of various respiratory infections. These patient should be advised to take vocational guidance. Cardiac abnormality and respiratory complications decreases the life span and thus increases the rate of sudden death in patients of situs inversus.

Situs inversus is a rare congenital anomaly with reversal placement of various thoracic and abdominal organs. Usually detected accidentally, are susceptible to catch various infection and are prone to sudden death.