Microcephalus In A Neonate Caused By Cytomegalo Virus (CMV)

We are presenting a case where an asymptomatic mother infected with herpes, rubella and CMV virus as diagnosed by elevated IgG levels of all these three viruses gave birth to a neonate with microcephalus. On serology, titres of all these three viruses were found to be raised in the neonate; indicating that the neonate acquired infection in the first trimester of the intrauterine life.

TORCH infection is an acronym for infection caused by Toxoplasmosis, Other (syphilis, varicella-zoster, parvovirus B19), Hepatitis B, Rubella, Cytomegalo and Herpes virus. This group of infections are a main threat of serious congenital neonatal infection. Severity of infection depends on the gestational age. In early pregnancy placenta forms a barrier that protects the fetus from damage caused by humoral and cell mediated immunity response.[1]

A 22 year woman married since 6 year G2P1NND1L0 with moderate mitral stenosis of rheumatic etiology with non-immunized Rh negative status registered at our hospital at 6 months of amenorrhea. On antenatal ultrasonography microcephalus with overriding of skull bone was detected. On evaluation her TORCH serology showed Herpesvirus1, Cytomegalovirus and Rubella virus specific IgG titre values well above the normal range. IgG values for CMV was 65 IU/AU, for HSV1 was 150 IU/AU and for Rubella was 135 IU/AU respectively. IgM was negative. Her other antenatal investigation profile was normal including HIV status which was negative. Her blood group was O negative, her husband’s blood group was A positive and her indirect coomb test (ICT) was negative. She had a spontaneous term delivery. A live female neonate with microcephalus was born. There were no other visible external anomalies detected at birth. The neonate was further evaluated by neonatologist to find out the cause of microcephalus. On imaging with MRI the brain showed diffused cerebral and cerebellar hypoplasia, ventriculomegaly predominantly involving lateral ventricles, gyral abnormality in both cerebral hemispheres with paucity of gyri in left occipital region representing Lisencephaly. Also there was periventricular calcification of basal ganglia, frontal and parietal region. All these features were suggestive of TORCH infection (most likely because of CMV infection). TORCH titre of the neonate was positive for Cytomegolo virus, Rubella virus and Herpes virus infection. Titre of IgG value for herpes virus 1and 2 was 29.90IU/ml(reactive >1.1), for Rubella was 78.21 IU/ml(reactive>10) and for CMV was 650.09 IU/ml(reactive>1.1) respectively. The IgM antibodies were found negative in both, mother and neonate for all three viruses indicating infection in earlier trimester of pregnancy at least 3 month earlier than birth of child. It was suspected that infection was because of CMV as titre of CMV antibodies was much higher than other viruses antibodies titre. 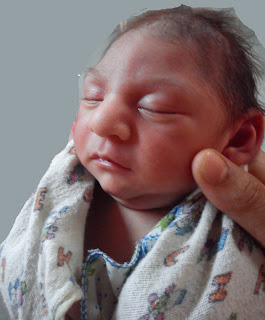 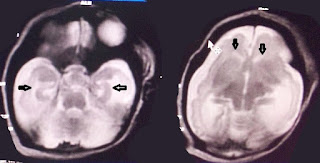 For further confirmation neonate’s urine sample was sent for DNA PCR, which is a gold standard test for diagnosis of TORCH infection, which came to be negative. Neonate was discharged on oral Gancycliovir 16mg/kg twice a day dose for six weeks and was called for further follow up after completion of the dose.

CMV is a member of the herpesviridae family of viruses. The virus has a property of latency and reactivation.[1] Symptomatic infection occurs either in fetuses or in patients with defective T-Cell immunity. CMV has property to destroy host cell and disturb host defense mechanism and persists as a latent infection in the host.[2] Majority of the infected newborns remain asymptomatic other than those which are clinically affected and the immunosuppressed ones.
CMV is the most common congenital infection in the new born affecting 1% of all live births.[3] Primary verses secondary infection during pregnancy is differentiated on the basis of serologic testing. Presence of IgG and IgM antibodies during pregnancy indicates primary infection in a previous known seronegative woman. The presence of maternal antibodies prior to conception along with the presence of CMV virus by culture in new born confirms the recurring infection in mother. A limited number of infants with symptomatic congenital infections are known to have been born to mother who were sero-positive before pregnancy.[4-6]
In our case mother was totally asymptomatic except that she had a previous unexplained neonatal death and her IgG titre for CMV was raised between the two pregnancies. This shows that the mother was infected before pregnancy and fetus got infected which is a rare phenomena in case of primary CMV infection as mother’s anti CMV antibodies prevents infection to the fetus. However in this pregnancy the fetus was probably affected because of recurrent or reactivation of the CMV infection.

Though CMV infection is rare one, it is an important cause of microcephalus in newborns affected. We need to follow up these babies with full course of anti-viral treatment for their future neuro-development.