Congenital vascular abnormal arterial and venous connections with immense potential for growth are Arteriovenous malformations (AVMs).[1] We report a case of cardiomegaly and hypoplastic lungs detected on prenatal ultrasound scan (USG) that turned out to be a huge arteriovenous malformation of the upper limb presenting as secondary high output cardiac failure in the neonate at birth.

AVMs in neonates are very rare. The pathogenesis of these is not very well understood. Early and accurate diagnosis will help in delivering the neonate in a tertiary care set up where interventional radiology support is available and congestive cardiac failure can be managed effectively.

A 22 year old primigravida with spontaneous conception out of non consanguineous marriage for 1 year presented to us in early labor. She was referred to us in view of a malformed fetus (cardiomegaly with hypoplastic lungs ) as detected on USG. She was asymptomatic throughout her pregnancy except for history of varicella infection at 20 weeks of pregnancy for which she was treated with acyclovir for 5 days. She also had papular erythematous coalescing plaques with fine scaling at periphery on upper and lower limbs for which she was treated with an antihistaminic by a private practitioner. Patient had no other co morbid surgical or medical illness .
Her general and systemic examination were normal. On abdominal examination, the uterus was full term, contracting once in every 10 minutes, and contraction lasting for 15 seconds. The fetus was in the LOA position. Fetal heart sounds were 144 beats /minute and regular . All her serological and biochemical investigations were within normal limits except for the third trimester USG scan showing fetal cardiomegaly with dilated SVC and pulmonary artery due to volume overload and hypoplastic lungs .There was a hetero echoic lesion 67 x 68 x 50 cm in the left forearm with significant internal vascularity and predominantly slow venous flow. Pediatric surgery consultation as part of prenatal fetal medicine was taken and a very poor fetal prognosis in view of cardiomegaly and hypoplastic lungs was explained to the patient’s relatives. Skin consultation was taken and patient was diagnosed with inverse pityriasis rosea as seen in Figure 1and was treated symptomatically with oral Azithromycin and local calamine lotion application. 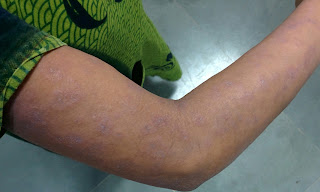 Patient progressed spontaneously into active labour and delivered a 2.704 kg female neonate with Apgar score of 9/10. Neonate had a giant vascular lesion extending on whole of the left forearm. It was erythematous, warm and pulsatile with bruit and thrill, overlying skin had dystrophic changes probably due to tissue necrosis. All the features were suggestive of a huge Arterio venous malformation as shown in Figure 2, 3 and 4. Neonate was immediately shifted to NICU and was diagnosed to be in secondary congestive high output cardiac failure in decompensated state.

Cardiomegaly and the apparently hypoplastic lungs seen in the USG scan earlier were due to secondary high output congestive cardiac failure with volume overload because of AV malformation. Neonate was immediately started on anti congestive measures with maximum doses of frusemide and digitalised. Maintenance doses of digoxin were given. Interventional radiology support to repair the AV malformation which was the cause of CCF was taken. But due to poor general condition of the neonate and very high anaesthetic risk , immediate repair could not be attempted. Neonate succumbed to congestive cardiac failure on day 4 of birth.

AVMs are among the rare congenital vascular anomalies. It is however very rare for an AVM to present in neonatal period. In series of 138 AVMs only one presented at birth.[2] If systemic blood pressure falls below the pulmonary pressure, neonate can develop a right to left shunt through foramen ovale and ductus arteriosus. In some cases this leads to early death.[3] Thus emphasizing the need for an urgent referral to an appropriately experienced team to care for these neonates. A clinical staging system introduced by Schobinger in 1990 is very useful for documenting presentation and evolution of an AVM.[4]
Stage I (quiescence): pink-bluish stain, warmth, and arteriovenous shunting by way of Doppler examination.
Stage II (expansion): Enlargement, tense/ tortuous veins, thrill, bruit and pulsations in addition to stage I.
Stage III: same as stage II, plus dystrophic skin changes, ulceration, (destruction) tissue necrosis, bleeding, or persistent pain ( pseudo Kaposi sarcoma )
Stage IV: cardiac failure (decompensation) in addition to stage III.
Management includes surgery, catheter embolisation, and direct percutaneous sclerotheraphy.[5] Distal ischaemia is a feature of extremity AVM and any intervention may decrease the distal circulation even further and it must be carefully planned taking into account the future treatment. Ideally surgery is to be carried out within 72 hours after embolisation. The results of managing large AVMs can be disappointing.[6] Symptomatic AVMs rarely present in neonates. When the lesions are extensive like in our case the neonate can present with high output congestive cardiac failure.[7] Urgent care by a multidisciplinary team is necessary for medical stabilization. Ideal treatment should be embolisation or sclerotheraphy followed by early surgery which in our case could not be attempted. But even with aggressive management recurrence is very frequent and associated with high risk of amputation . Research to develop of newer treatment options for AVMs is required. Surgical removal and intravascular embolization are palliative methods for controlling AVM’s but they are not always curative. This case once again reinforces the fact the peripheral AVM can be a cause of fetal cardiomegaly with a apparently hypoplastic lungs.[8]