The breaking of the tip of a metal suction cannula while performing a suction evacuation procedure is a rare and almost unheard of the complications. Usually such a complication is managed by removing that broken tip, with a ring forceps or an artery forceps, both of which are blind procedures. Here we present a case of a 22 year old woman while undergoing an MTP, wherein, the tip of the metal suction cannula was broken during the procedure and was retained inside the uterus. We removed that broken tip with an innovative method using a laparoscopic 5 mm tenaculum passed alongside the hysteroscope. Thus establishing a safe and under vision, method of the removal of any foreign body from the uterus, under direct vision, as a better option than a blind procedure and the need for new innovative hysteroscopic instruments, for retrieving heavier and larger objects.

A review of literature shows very few cases of breaking of the metal tip of a cannula during suction and evacuation. As such foreign body in uterus is a very rare condition. The usual foreign bodies that are found are intrauterine devices. Other foreign bodies found in the uterus are broken laminaria tents, tips of curettes, and non-absorbable suture materials. Very rarely fetal bones after an incomplete abortion have also been written about. Hysteroscopy is always a better option for foreign body removal as direct vision reduces the chances of complications than that of a blind procedure. It also helps to see whether the foreign body is removed in whole and completely, as the entire cavity can be scanned under vision.

A 29 year old female gravida 3 para 2 living 2 with 6 weeks of pregnancy came to us for a medical termination of pregnancy. All routine blood examinations were sent and her hemoglobin, platelets and urine routine were within normal range. While doing a suction and evacuation with a metal vacuum aspiration cannula, the tip of the cannula broke inside the uterus and did not come out. The suction cannula was checked prior to the procedure but probably due to the wear and tear it broke inside while performing the procedure. An attempt was made to try to remove the tip doing a curettage and also of a blind procedure by using a ring forceps and an Allis’ forceps, both of which failed due to improper grasp on the broken tip, probably due to a change in position of the broken tip. 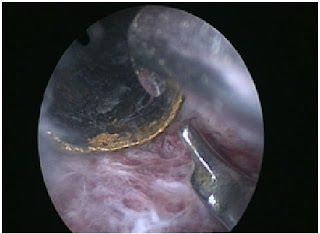 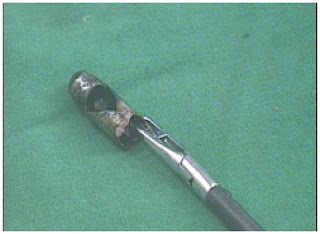 A decision of hysteroscopic removal of the broken tip was taken. Normal saline was used as a distension media. The outflow track of the hysteroscpe was intermittently opened due to which the vision was not hampered. But the hysteroscopic grasper would have been too small to catch heavy and large broken metal tip. Thinking that the hysteroscopic grasper would also break while trying to hold a larger and heavier object like the metal tip, the idea was abandoned.
Hence an innovative technique was used wherein we used a laparoscopic 5 mm tenaculum.
The tenaculum was passed along side the hysteroscope. There was minor leakage from alongside the hysteroscope but did not compromise the distension nor the vision. And due to the direct vision, we were able to grasp the hollow part of the broken tip with the laparoscopic 5 mm tenaculum due to which the tip could be removed vertically with the least diameter.

Early case reports in the literature date to the mid 60’s and the management of in-utero foreign bodies’ cases have previously been blind dilatation and removal with a ring forceps or a hysterectomy.[1] Verma et al reported their experience with ultrasound-guided removal of retained IUDs, as safe and cost-effective, and it could be performed in an office setting.[2] Roy et al. reported removal of an intrauterine wooden stick retained for 12 years from the uterine fundus, under ultrasound guidance.[3] Yazicioglu et al. removed the tip of number 6 Karman’s cannula hysteroscopically from the subvesical space.[4]
But as we can see from this case that holding the broken tip at a specific site and reducing the possibility of injuring any surrounding areas was only possible under direct vision.
Also a larger instrument like a laparoscopic tenaculum was needed to retrieve a large and heavy object like the broken metal tip.
Operative hysteroscopy is an evolving branch as thus we conclude that removing the broken tip under vision was a better option than a blind or under ultrasonography guidance. Also there is a  need to develop new larger innovative hysteroscopic instruments for different operative procedures.