Uterine scar dehiscence and subsequently rupture is one of the most dreaded complications encountered in obstetrics and is every obstetricians’ nightmare.  The varied presentation of the phenomenon of dehiscence and rupture from being silent to outright dramatic and life threatening poses a challenge to the obstetrician in terms of diagnosis and management. We present a case of uterine classical scar rupture, clinically simulating intestinal obstruction till we opened the Pandora’s box and got to the right diagnosis.

A 29 yrs old gravida 3, para 1, omtrauterine fetal death 1, abortion 1 with non isoimmunized Rh negative pregnancy with previous history of lower segment cesarean section with 34 weeks of gestation was referred from a private hospital as a case of preterm labor with suspected intestinal obstruction. She had no previous case records. The only information received from the patient was that cesarean section was done for prolonged preterm labor at 8 months of gestation in Uttar Pradesh 3 years ago. The patient was evaluated for the same and as she had no complaints of vomiting, distension of abdomen or obstipation, intestinal obstruction was excluded clinically. Her abdomen was soft to touch and had no signs of tenderness, guarding, or rigidity. Pfannestiel scar of previous cesarean section was seen. Uterine size corresponded to 34 weeks of gestational age. Minimal uterine activity was observed. There was no scar tenderness. On vaginal examination cervical os was closed and there was no show or amniotic fluid leak. The patient was admitted and treated for threatened preterm labor with tocolytics. She responded and was then discharged after 2 days of observation. She again presented after 2 weeks at 36 weeks of gestation with abdominal pain. She had no uterine activity, scar tenderness or vaginal bleed. An abdominal para-umbilical defect with herniated bowel loop was noted. Peristalsis in the herniated bowel loop was felt. Bowel loop returned back after reposition. She was kept under observation. On the second day, her pain increased in severity and she had 2-3 episodes of vomiting. The defect had increased and the bowel loop with persistent peristalsis could not be reduced. Surgeons evaluated the patient, detected the hyperperistaltic irreducible bowel loop and suspected intestinal obstruction. Decision for emergency laparotomy and lower segment cesarean section was taken. The surgery was performed jointly by the obstetrician and the surgeons. Surgery was done under general and epidural anesthesia. The abdomen was opened by a midline vertical incision. Dense adhesions were encountered between the rectus muscle and the anterior surface of the uterus. A bowel loop was found adherent to the anterior surface of uterus. After releasing the adhesions a full length classical cesarean section scar rupture was observed. 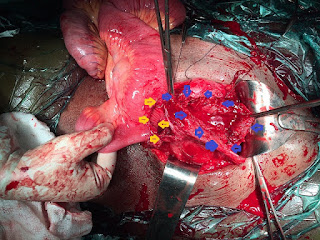 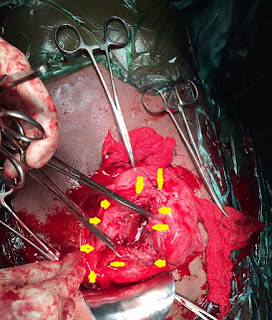 Near term fetus with 9/10 Apgar scores was delivered through the previous ruptured classical scar. Approximately 5 cm loop of ileum was densely adhered to the ruptured scar. This ileal loop had a spiral, irregular rent measuring about 3 cm that was seen when it was separated from the edge of the ruptured scar after delivering the fetus. The lower edge of the opened scar did not reach the visceral peritoneum of the lower segment. The previous scar was excised and the uterus was repaired in two layers with polyglactin No.1.  Four inches of the bowel was resected and side to side anastamosis was done. Proximal diverting loop ileostomy was done and a stoma bag was attached. Postoperatively the patient had sepsis that settled with broad spectrum antibiotics. Stoma closure was advised after 3 months and proper stoma care was explained. Suture removal was done after 1 week. The patient improved clinically and was discharged. Couple was counseled about hazards of further pregnancies and the risk of performing any more surgery on the patient in view of permanent contraception and hence the patient’s husband was advised to undergo vasectomy to limit family size.

Uterine rupture can be classified as complete or incomplete. It is complete when all the layers of the uterine wall are separated and incomplete when the visceral peritoneum is intact but the myometrial fibers give way.[4] The greatest risk factor for either form is previous cesarean delivery.[4] Metaanalysis of 25 studies from 1976 to 2012 indicate the overall incidence of pregnancy related uterine rupture is 0.07%.[5] Incidence of uterine rupture in an unscarred uterus varies demographically from 0.01% to 0.1%.[5] Incidence of uterine rupture in cases of previous cesarean section is 0.3%. Classifying further, risk of rupture in a previous case of low transverse uterine scar varies from 0.2 to 0.9% and it shoots up to 2-9% in a case of previous classical cesarean section.[4] An astonishing 10 fold increase in risk!  Classical cesarean section in today’s times is performed rarely and accounts for 0.5% of all births.[5] The probability for the performance of a classical cesarean delivery is inversely proportional to the gestational age at the time of delivery. The rate of classical cesarean sections in a study was 20% at 24 weeks. 5% and 1% at 30 weeks and at term respectively [6].
Our patient initially presented with abdominal pain and as uterine activity was present she was provisionally diagnosed and treated as a case of threatened preterm labor. She had no documents of the previous cesarean section. Verbally her previous medical practitioner had told her that cesarean delivery was done for prolonged labor at preterm gestational age. In the absence of any previous case records, operation notes, discharge summaries it was impossible for us to assume that a classical cesarean section had been performed as this is against the practice of standard care. Furthermore, presence of the Pfannestiel scar also pointed towards a lower segment uterine incision rather than an upper segment uterine incision. The access and the exposure of the upper segment to perform a classical section is not adequate with a Pfannensteil incision in the 8th month of pregnancy. Hence the probability of a classical section and its consequence like scar thinning or rupture in the antenatal period was not contemplated. The patient presented again after 2 weeks with aggravation of the same symptoms. The presence of the fixed, irreducible, hyperperistaltic bowel loop through an abdominal right paramedian defect raised the suspicion of subacute intestinal obstruction due to adhesion. Exploratory laparotomy clinched the diagnosis. The hyperperistaltic loop that was adherent to the previous section scar had a spiral tear and its edges were not bleeding. This adherent loop formed a barrier and prevented the uterus from expelling out the fetus into the peritoneal cavity after the scar rupture. The placenta that was implanted posteriorly was not injured and uteroplacental blood supply was not compromised thus saving the fetus. Retrospectively, the scar thinning and rupture had probably set in 2 weeks back. Thus it was the surgical management of intestinal obstruction that led us to the final diagnosis and subsequent treatment. Performing a classical cesarean operation without proper indication, not adequately documenting the same and warning the patient of subsequent consequences should be strongly condemned as this not only increases the morbidity but also increases maternal and perinatal mortality and suboptimal care in subsequent pregnancies.  All the subsequent pregnancies have to be monitored with a hawk’s eye, with good paper work and antenatal care to pick up the minutest abnormalities from as early as 20 weeks to prevent any such catastrophes.

Cases of acute abdomen in pregnancy must be addressed seriously. Especially cases of previous cesarean section should be evaluated in detail if they present with complaints of acute abdomen. All the possible obstetric and nonobstetric causes must be thought of and the patient investigated accordingly. Surgical causes deserve a special mention in cases of previous cesarean section especially adhesions. Combine this with the fact that in many developing countries, patients do not maintain the records of the previous surgeries, like in our case; one must be ready for any kind of surprises.