The occurrence of malignancy in pregnancy is rare, with an incidence of 0.07-0.1% of all malignant tumors based on epidemiological studies. [1,2] Giant cell tumors (GCT), better known as Osteoclastomas are aggressive benign neoplasms of the bone commonly affecting the ends of long bones. Sacrum is the most common site for the tumor in the axial skeleton, accounting for 6% of all GCTs. [3] It is unusual to find a giant cell tumor during pregnancy. We present a case of a primigravida with sacral giant cell tumor diagnosed during pregnancy.

Giant cell tumors are common bone neoplasms affecting the ends of long bones. The most common sites being the distal femur, proximal tibia and distal radius in order of occurrence. The sacrum ranks fourth in the order of occurrence [4]. The most common primary tumor of the sacrum is chordoma, second being GCTs. Although considered benign tumors, they can be locally aggressive and can also metastasize. Treatment options include radiation therapy, surgical management in the form of intralesional curettage and filling with bone cement, wide excision by complete or partial en bloc sacrectomy, surgery plus adjuvant treatment and serial arterial embolization. Other drugs that are being used as adjuvant treatment modalities for recurrent and metastatic tumors are bisphosphonates, denosumab and interferons. Our patient underwent elective Cesarean section at 34 weeks gestation following which she was treated with serial arterial embolization and denosumab therapy.

A 36 year old primigravida, married since one year, 29.3 weeks of gestation was referred to our hospital from a specialized cancer institute in view of sacral giant cell tumor in pregnancy requiring Cesarean Section to prevent any neurological deficit to the mother. Patient had complaints of severe backache since third month of gestation with radiating pain to both legs, difficulty in walking and complaints of constipation and increased frequency of micturition. The pain was initially considered to be due to pregnancy and no further examination was performed. She was given conservative treatment for two months, after which on consultation with a private orthopaedician, an MRI lumbar spine was done which revealed a well-defined lobulated irregular mass lesion in the sacrum, measuring 6.5cm x 6.8cm x 4.7cm, obliterating sacral spinal canal and extending anteriorly into the presacral space, representing a neoplastic lesion. Fine needle aspiration cytology of the mass done at the cancer institute was suggestive of sacral giant cell tumor. Hence, patient was referred to us for termination of pregnancy as patient needed urgent angioembolisation and bisphosphonate therapy which could not be initiated during pregnancy. She was admitted in antenatal ward, her vital parameters were stable with blood pressure ranging from 130/90mmHg to 160/100mm Hg despite complete bed rest and no proteinuria. Respiratory and cardiovascular examination was normal. Knee jerks were normal and she had no pre monitory symptoms. On per abdomen examination, uterus was corresponding to 24 weeks size gestation with external ballottement present with oligohydromnios.  She was started on tablet alpha methyl dopa 250 mg qid for hypertension and tablets morphine and gabapentin for pain relief as advised by the cancer specialists. All her blood investigations were normal. Ultrasonography was suggestive of a single live intrauterine gestation of 25.2 weeks with moderate oligohydromnios with no obvious congenital anomalies. Doppler was within normal limits. Orthopedic reference was taken, advised symptomatic pain relief and elective Caesarean Section in view of maternal interest. Patient was taken up for elective Cesarean Section under general anaesthesia at 34 weeks of gestation  in view of  severe intrauterine growth restriction and excruciating pain in her back and lower limbs  despite morphine and gabapentin. She delivered a female baby of 1.148 kg with an Apgar score of 9/10. Baby was admitted in neonatal intensive care unit for further management. Post-operative course in our hospital was uneventful. Patient was discharged on day 14 after suture removal and referred to the cancer institute for further management. Repeat MRI pelvis was done which was suggestive of a mass occupying lower four sacral vertebrae involving the erector spinae muscle posteriorly and pyriformis laterally and encasing the sacral nerve roots, with no involvement of sacro iliac joints. Patient underwent serial arterial embolization twice at 6 weeks interval. Embolization of feeding vessels from bilateral internal iliac arteries and sacral arteries was done using 100-300 um embospheres. Post procedure angiograms showed significant reduction in tumor vascularity. After two sessions of angioembolisation, patient was started on weekly injections of denosumab (120mg) given subcutaneously. Patient has taken four doses till now and is now asymptomatic and she has been advised the same injection once a month and has been asked to continue follow up at the cancer institute 6 weekly with MRI spine. 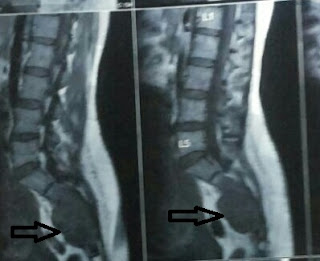 Figure 1: MRI at the time of diagnosis. Black arrow shows the tumor in the sacrum. 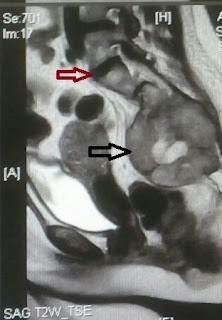 Giant cell tumors are most common in the third and fourth decade of life with a predilection towards females in the ratio of 1.2:1. [5] Histologically, these tumors are benign with a vascularized network of spindle shaped stromal cells surrounding multinucleated giant cells. Sacral GCTs are a rare complication during pregnancy and are clinically silent in their initial stages and cause few symptoms until they achieve an extremely large size. Hence the detection of the tumor may be delayed since the pain is misinterpreted as a symptom of pregnancy, as in this case. Although histologically benign, these tumors are known to be locally invasive (<16%) and associated with pulmonary metastasis (1-9%) [6,7]. The local recurrence rate in the sacrum is higher than that of other skeletal locations. Investigation of choice is Lumbosacral magnetic resonance imaging (MRI). Sacral GCTs are difficult to treat because of their location and aggressive behavior. Wide resection of the tumor from the sacrum is associated with significant morbidity and life threatening intraoperative bleeding [8] and may lead to neurological damage and bowel and bladder dysfunction. Intralesional curettage, burring of the cavity and packing with bone cement is also one of the treatment options with good functional outcome and a local recurrence rate of 15% but is not feasible in sacral tumors as these infiltrate the spinal canal. [9] Hence treatment of pelvic GCTs by arterial occlusion has been preferred as a primary modality. This technique devascularizes tumors, causes reduction in their size, calcification of its margins and relieves pain. It requires an initial angiogram before embolization to visualize the feeding vessels and embolization is done using gel foam, stainless steel coils or polyvinyl alcohol[10], followed by reassessment with CT scan or MRI to evaluate the success of treatment. Serial arterial embolization is performed at regular intervals until there is decreased flow on angiography. In our case angioembolisation of bilateral internal iliac arteries and sacral arteries was done. Denosumab, a human monoclonal antibody is an efficient drug against RANK (Receptor activator of nuclear factor-kappa beta) ligand, which inhibits osteoclast function and helps in rapid suppression of bone turnover in these patients. It is used in unresectable or recurrent tumors and it is associated with inhibited disease progression (99%) [11] and reduced need for surgery. 90% of tumor necrosis has been reported with the use of denosumab. [12]. As our case involved extensive involvement of sacral canal with soft tissue involvement, denosumab was initiated in our patient. Calcium and Vitamin-D supplements need to be given to counteract side effects such as hypocalcaemia, hypophosphatemia. Other modality of treatment of sacral GCT is en bloc spondylectomy which is also associated with recurrence, incidence being less than wide resection. [13, 14] Surgery with adjuvant radiotherapy has a limited role since the chances of malignant transformation are higher than that of cure. [15]

In comparison to GCTs of long bones, tumors of the axial skeleton are more aggressive and need to be considered as a severe disease. Embolization deserves consideration as a primary and possibly the sole treatment of giant-cell tumors of the sacrum. Denosumab is also a promising drug in treatment and prevention of disease progression in GCT. Treatment requires close clinical and radiological follow-up, a multidisciplinary approach and a full commitment on the part of the patient and surgeon.