A Case Of Unilateral Complete Absence Of Fallopian Tube And Ovary

A 32 yrs old multigravida with 39 weeks of gestation, while undergoing a cesarean section, was incidentally discovered to have unilateral complete agenesis of right fallopian tube and ovary. No other abnormal findings were present.  Unilateral absence of fallopian tube and ovary has rarely been reported in the literature The associations and etiology, developmental and otherwise are discussed.

Unilateral absence of fallopian tube and ipsilateral ovary is a rare event with very few mentions in the literature. The etiology is usually auto amputation of the adnexa due to a silent, or sub-acute torsion with resorption of the necrortic adnexa or very rarely may be associated with a congenital malformation early in intrauterine life which coexists with a unicornutae uterus, ipsilateral renal malformations and also absence of the ipsilateral utero ovarian and round ligament.

A 32 yrs old Gravida 4 Para 2 Living 1 NND 1 with 39 weeks of gestation was referred from a private hospital in view of deranged liver function tests for further management.  She had previous two vaginal deliveries. On abdominal examination, uterus was full term with increasing uterine contractions. There were no surgical scars either of laparotomy or laparoscopy on the anterior abdominal wall. Cervical internal Os was 3 cms dilated and after rupture of membranes moderate meconium stained liquor was seen. Emergency lower segment cesarean section was performed, delivering a 3.16 kg female child with 9/10 Apgar scores at birth.
Intra-operatively, the uterus was eventerated. It was normal in size and shape. The left Fallopian tube and ovary were present. Surprisingly, the right sided Fallopian tube and ovary were absent. Both the round ligaments and infundibulo-pelvic ligaments were present.  No stump of the Right Fallopian tube or any utero-ovarian ligament attached to the uterus could be found.
Figure 1 and 2.
There was no ovary in the Right ovarian fossa. In the post operative period the patient was questioned regarding any previous episodes of abdominal pain either in childhood or adulthood that was conservatively managed. She was unable to recall any such episodes. Post operative abdominal ultrasonography showed normal kidneys. Patient had an uneventful postoperative period. 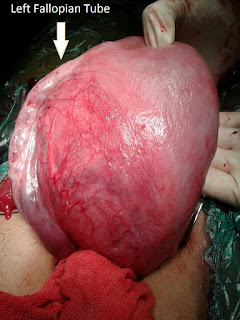 Figure 1: Posterior view of the uterus. 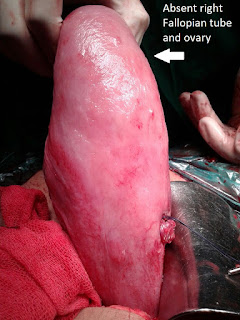 
The uterus and the Fallopian tubes develop from the Mullerian ducts, while the ovaries are derived from the gonadal ridge [1]. Development starts in the embryo during the  6th week when the two Mullerian ducts converge towards the mid-line and meet. This results in the formation of the mid-line luminal structures, the uterus and usually the upper part of the vagina. Cranially, the Mullerian ducts form Fallopian tubes. Various Mullerian anomalies develop if this process is disrupted or altered [1].Even though the Fallopian tubes and ovaries are anatomically adjacent and functionally related, their embryological origins are diverse. Ovarian development is from the gonadal ridge. Developmental abnormalities that have been observed in the female genital tract more commonly include organs that have their embryological origin in the Mullerian ducts. The incidence of Mullerian anomalies in general population is 0.5% [2] while that of adnexal malformation is 1:11240 [3]. The absence of both Fallopian tube and ovary, thus, warrants further inquiry.
Unilateral absences  are usually asymptomatic. They are  incidentally detected during a laparoscopy or laparotomy performed for gynecological or obstetric conditions. The first such case was reported by Danreuther in 1923 [4].  Agenesis of both the ipsilateral ovary and Fallopian tube is rare but it has been reported and it is often associated with malformations of the uterus and/or urinary tract, including a unicornuate uterus and ipsilateral renal agenesis [5]. Simultaneous developmental disorder involving the Mullerian system and the genital ridge is very unlikely.  The true etiology of unilateral absence of ovary and/or Fallopian tube is yet to be elucidated. The most likely causes of ipsilateral ovarian and coexisting tubal absence are conjectured to be an asymptomatic torsion of the adnexa with consequent organ ischemia and reabsorption [6][7], or a defect in the development of the Mullerian and gonadal structures due to underlying vascular anomalies.[5] Torsion can occur at anytime after birth or may be even in the intrauterine life.

In our patient these findings were discovered after exteriorizing the uterus. Our patient did not have a unicornuate uterus nor were their any coexisting renal anomalies to suggest a developmental cause. Both the round ligaments and the utero ovarian ligaments were present in our patient. Embryogically, the primitive undifferentiated gonad is attached and supported to its upper and the lower pole with bands or gubernaculum and these bands subsequently form the suspensory ligament or the infundibulo pelvic ligament of the uterus and the utero ovarian ligament which then continues as the round ligament respectively. [8]. Presence of both these ligaments in our patient, absence of uterine and renal malformations indicate to the unlikely-hood of a developmental anomaly. It is more likely that our patient had an asymptomatic adnexal torsion and resorption during the past that went unnoticed.

Routine inspection of adnexal structures during all cesarean sections and laparotomies is recommended. Such patients may also be discovered during workup for infertility or chronic pelvic pain. Once diagnosed with the condition, the patient must be further investigated to find associated renal anomalies by ultrasonography, IVP and/or MRI.