We present a case report of a 45 year old female with a large cervical fibroid in a known case of dilated cardiomyopathy with cardiac arrhythmias with an ejection fraction of 30 % who presented with severe anemia due to menorrhagia. Prior to surgery the patient underwent uterine artery embolization to decrease the vascularity of the large cervical fibroid in view of suspected large intraoperative hemorrhage. She was planned for surgery within 48 hours of the procedure but developed persistent ventricular premature beats on the day of surgery for which surgery was deferred after cardiac opinion. She presented 2 weeks later with a prolapsed fibroid through the vagina with necrosis and infection for which antibiotics were started. She underwent total abdominal hysterectomy with bilateral salpingo-oophorectomy and had an uneventful postoperative recovery.

Dilated cardiomyopathy is a group of diseases that primarily affects the myocardium. It is the most common form of non-ischemic cardiomyopathy.[1] It has a prevalence of 36 per 100000 and is commonly seen between 20 and 60 years of age.[2] Dilated cardiomyopathy may cause congestive cardiac failure in about one in three cases.[1] There is dilatation of a part of myocardium, the etiology of which is unclear.

A 45 year old woman post-menopausal since 1 year had come to our outpatient department (OPD) with complaints of lump in the abdomen which had increased to the present size gradually over 2 years with excessive bleeding per vaginum since 3 days. On examination she was extremely pale with pulse rate of 110/min, blood pressure of 100/60 mm Hg and 2x2 cm thyroid nodule with a 32-34 weeks’ size mass arising from the pelvis, hard in consistency with restricted mobility. Her Hb was 6 g/dl, PCV of 21 with hypochromasia and microcytosis. Ultrasonography was suggestive of multiple uterine fibroids, intramural and submucosal in location with largest anterior wall fibroid measuring 18x15x15 cm. She was a case of trivial tricuspid regurgitation, trivial mitral regurgitation and global hypokinesia with ejection fraction of 30% with dilated cardiomyopathy. She was started on intravenous tranexamic acid and was given 5 units of packed cell volume transfusion. CT scan revealed multiple uterine fibroids, largest measuring 18x15x15 cm arising from anterior lower uterine segment compressing the sigmoid colon, lower ureters and bladder bilaterally with mild hydronephrosis on both sides with well-defined fat planes. Serial ECGs were suggestive of ventricular bigeminy with ventricular premature beats. Chest radiograph indicated mild cardiomegaly with bilateral prominent hilar shadows suggestive of pulmonary hypertension. Her serum calcium was 6.9 mg/dl and hypocalcemia was treated with 20 ml of 20% calcium gluconate followed by oral calcium supplements. Cardiac stress test was done which showed ill sustained monomorphic ventricular tachycardia in stage 1 with recovery in stage 2 with return to baseline sinus rhythm in stage 3 suggestive of need of electrophysiological studies followed by radiofrequency ablation. Cardiac was suggestive of dilated non infiltrative cardiomyopathy. thyroid was suggestive of enlarged thyroid gland with a benign thyroid nodule in the right lobe. Her serum was 2.71 Miu/L  on tablet Thyronorm 50 μg OD .Endocrine opinion was taken and the drug was continued.
Bilateral uterine artery embolization was done with fine polyvinyl alcohol 300 particles so as to reduce intraoperative blood loss. Excessive blood loss in this patient with an ejection fraction of 30% would be life threatening. She was posted for total abdominal hysterectomy with bilateral salpingo-oophorectomy with moderate cardiac risk. She had persistent ventricular premature beats on operation table which did not subside.  Serum electrolytes sent were within normal limits. After discussion with anesthetist and cardiologist surgery was deferred. She was started on oral frusemide 20 mg 1-1-0, carvedilol 3.125 mg1-0-1, ramipril 2.5 mg 0-0-1 and spironolactone 25 mg 0-1-0 and cardiologists advised to postpone surgery for 4 weeks. Patient was started on tablet medroxyprogesterone acetate 10 mg tds so as to control vaginal bleeding and was discharged. She presented 2 weeks later in our out patients department with heavy bleeding per vaginum and a prolapsed mass outside the introitus. On examination vital parameters were stable with a 30 weeks’ mass arising from pelvis and a 10x fleshy mass extruding from the introitus with necrosis and foul smell.  This probably was due to necrosis of the fibroid following the procedure of uterine artery embolization.
Intravenous ceftriaxone, metronidazole and analgesics were started. Swab for culture sensitivity was sent from fleshy mass which showed Pseudomonas aeruginosa sensitive to levofloxacin and polymyxin B. Intravenous levofloxacin and polymyxin B ointment was given for local application over the mass. She was posted for surgery with consent for requirement of intraoperative and perioperative intensive cardiac care and ventilator. 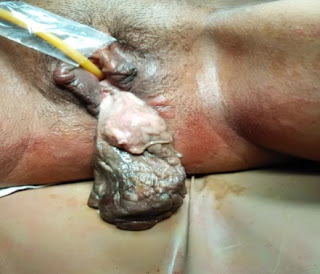 Figure 1: Sloughed off necrosed fibroid outside the introitus.

Intraoperatively uterus was 30 weeks’ size with multiple fibroids. There was a large cervical fibroid of size 22x20 cm. Bilateral fallopian tubes were edematous and bilateral ovaries were normal. Total abdominal hysterectomy with bilateral salpingo-oophorectomy was done under general and epidural anesthesia. Foul smelling pus was present at the base of the cervical fibroid which was sent for culture and sensitivity. 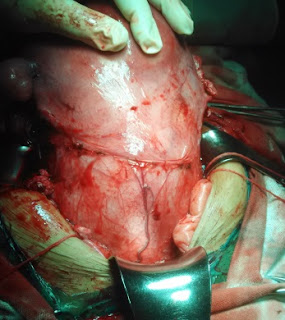 Intraoperatively and postoperatively her vital parameters were stable. Two units packed cell volume transfusion was given intra-operatively. Swab sent for antibiotic culture sensitivity suggested Escherichia coli sensitive to levofloxacin which was continued along with injectable ceftriaxone, metronidazole and gentamicin postoperatively. She was discharged on day 10 of surgery after suture removal. The scar site was healthy with no pain, discharge and induration. Histopathology report was suggestive of benign leiomyoma with hyaline changes. She was advised to follow up in cardiology OPD for electrophysiological studies and further management.

20-30% women in reproductive age group have leiomyoma uteri, the usual anatomical location being the body of the uterus and only 1-2% are confined to the cervix.[3] These women often present with an abdominal mass without any other symptoms, retention of urine, menstrual abnormalities, constipation or may mimic an ovarian tumor.[4] Our patient presented with a 32 weeks’ size mass with heavy bleeding per vaginum. She was a case of dilated cardiomyopathy with global hypokinesia with ejection fraction of only 30% with ECG changes showing ventricular bigeminy with ventricular premature beats. Dilated cardiomyopathy is characterized by progressive cardiac dilatation leading to impaired ventricular function.[1] There is global decrease in myocardial contractility which reduces left ventricular ejection fraction. According to Frank–Starling relationship, initially compensation occurs with enlargement of the left ventricular cavity leading to an increase in stroke volume with associated increase in the force of contraction.[1] Eventually these compensatory mechanisms fail, cardiac output decreases, resulting in left ventricular failure. In severe cases, there is combined systolic and diastolic dysfunction with impaired relaxation and elevated left ventricular end-diastolic pressures (LVEDP). This can lead to congestive cardiac failure and arrhythmias if not managed optimally. Medical therapy with various drugs used as disease modifying agents includes angiotensin-converting enzyme inhibitors (ACEIs), angiotensin II inhibitors and diuretics. Other drugs used are β-blockers, spironolactone, digoxin, biventricular pacing, and anticoagulants.
Our patient was started preoperatively with oral frusemide 20 mg 1-1-0, carvedilol 3.125 mg 1-0-1, ramipril 2.5 mg 0-0-1 and spironolactone 25 mg 0-1-0 to improve the postoperative outcome. Optimal management with these drugs can reduce the chances of development of arrhythmias and worsening of cardiac function. From anesthesia point of view the main aim was to prevent hypotension so as to avoid myocardial hypoperfusion. The goals of anesthesia are to avoid tachycardia, minimize the effects of negative inotropic agents, especially anesthetic drugs, to prevent increases in afterload and to maintain adequate preload in the presence of elevated LVEDP.
Preoperatively uterine artery embolization (UAE) was done to decrease the vascularity of the fibroid. It is a minimally invasive technique in which small polyvinyl alcohol (PVA) particles are used to occlude the blood supply to the fibroids. These particles stick in the lumen of the blood vessels forming a clot, thus occluding the blood supply. Eventually the fibroids reduce in size, and the symptoms get reduced or disappear. Preoperative embolization of the uterine arteries is also useful to decrease perioperative bleeding complications. It causes ischemia and necrosis of fibroids while preserving the uterus. UAE is technically successful in 95-99% of patients. It is successful in controlling menorrhagia in 85-95%. Transcervical sloughing of the necrosed fibroid can occur in about 5% of patients. 20-25% of patients with dominant submucosal fibroids can undergo sloughing.[5] This may resolve with spontaneous passage of tissue or may require surgical evacuation of the uterus. Other adverse effects of UAE include septicemia resulting in multiple organ failure,[6] endometritis[7], uterine necrosis[8], misembolisation from microspheres of PVA particles leading to ovarian failure,[9] infertility, menopause, loss of menstruation. Post embolization syndrome may occur, leading to chronic pain, nausea, vomiting, malaise, fever, night sweats. There can be fibroid expulsion, vaginal discharge containing pus and blood with foul odor coming from the infected necrotic tissue which remains inside the uterus, unsuccessful fibroid expulsion with fibroid being trapped in the cervix causing infection requiring surgical removal. Our patient presented with fibroid expulsion with foul vaginal discharge with bleeding and infection 2 weeks after uterine artery embolization requiring surgical intervention after a course of antibiotics.
This was an extremely high risk case from surgical, medical and anesthesia point of view. There was an increased risk of excessive intraoperative hemorrhage with difficult surgical technique due to the large size and location of the cervical fibroid. The management of the case was a challenge to the anesthetist and cardiologist due the ejection fraction being 30% with ventricular arrhythmias. She was managed with a multidisciplinary approach with involvement of gynecologist, cardiologist and anesthetist working as a team.