A 33 years old woman came to our outpatient clinic  for treatment of primary infertility and uterine leiomyoma. She was married and cohabiting since 12 years but did not conceive. Her menstrual history was normal. She had been diagnosed to have a leiomyoma of the uterus by another clinician elsewhere. Her medical and surgical history was not contributory. General and systemic examination revealed no abnormality. On gynecological examination; uterus was of 10 weeks' size, retroverted, cochleate, displaced to forward and left side, and with a nodular posterior surface.  Approximately 7× 6 cm firm fibroid was felt on right lateral wall of uterus. A diagnostic hystero-laparoscopy done 7 years ago showed normal findings. Her husband's semen analysis was normal.  Her hemogram, plasma sugar levels, thyroid, liver and renal function tests, serological tests for HIV, hepatitis B, and syphilis, and serum levels of FSH, LH, and prolactin were normal.  Her follicular study showed follicular development and spontaneous rupture indicating ovulation.  Ultrasonography of pelvis showed a leiomyoma measuring 7.6× 7.1 cm in right lateral wall of the uterus.  As per the patient's desire and clinical findings, a decision to perform a myomectomy was made.  On exploration, approximately 7× 8cm degenerated leiomyoma with scattered calcification on the surface was seen arising from right utero-ovarian ligament.  It was firmly adherent to the right half of the posterior wall of uterus, anterior wall and floor of the pouch of , and the rectum.  It had no pseuadocapsule. There was no plane of dissection and hence it could not be dissected off easily.  It was first separated from the ovary by division of the uteroovarian ligament between the ovary and the leiomyoma. Then its anterior surface was dissected free from above downwards. Then it was separated from the floor of the pouch of , passing backwards up to the rectum. This left about 1-2 cm wide raw area in the area dissected. The serosal edges of the raw portion on the back of the uterus could be approximated easily with a continuous suture of No. 1-0 polyglactin, the adjacent part of the broad ligament being used for that purpose.  The ovary was sutured to the upper part of this suture line for suspension as well as for covering the scar to prevent adhesions. There was a defect in rectal serosa 5 mm wide, whenre the leiomyoma had been dissected off. Rectal injury was ruled out by injection of air through a tube passed in through the anus, and filling the pouch of with saline to see if any air bubbles escaped through a possible rent. The defect in the peritoneum on floor of the pouch of and upper 0.5 cm of the anterior surface of the rectum was not sutured, as that would possibly kink the rectum. The abdomen was closed after leaving an intraperitoneal drain in the pouch of . The patient made an uneventful recovery. Histopathological examination of the rectum confirmed the diagnosis of a leiomyoma with degeneration. 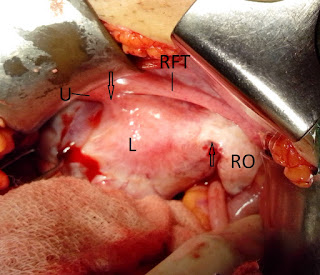 Figure 1. Operative findings. The uterus (U), the right fallopian tube (RFT) and ovary (RO), and the leiomyoma (L) arising from the right uteroovarian ligament (between arrows) are seen. 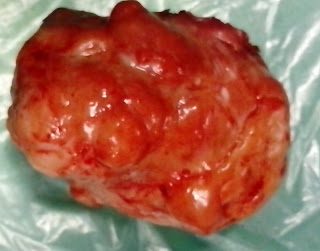 Uterine leiomyomas are benign smooth muscle tumors, that usually arise within the myometrium.[1] They may remain within the myometrium, or may grow towards its external or internal surface to become subserous and submucous leiomyomas respectively. Sometimes they arise from structures attached to the uterus, such as the broad ligaments, round ligaments, vagina, and the uteroovarian ligaments. Subserous pedunculated leiomyomas may become adherent to vascular structures like bowel and omentum and derive their blood supply from them.[1] When such leiomyomas lose their connection with the uterus, they become wandering leiomyomas. This occurs when their blood supply from the uterus diminishes and cannot sustain them. A similar occurrence is seen with leiomyomas which arise from relatively avascular structures like the round ligaments and uteroovarian ligaments.[2,3,4] The right uteroovarian ligament leiomyoma in the case presented probably outgrew its blood supply through the ligament. Hence it became adherent to the back of the uterus, the anterior wall and the floor of the pouch of , and rectum. A diagnosis of its origin could not be made preoperatively because it was firmly adherent to the uterus and mimicked intramural leiomyoma. It was considerably larger than the uterus, but was not responsible for the infertility of the woman. Since it had not developed from the myometrium, it did not have a pseudocapsule, and hence a plane could not be found to shell it out. It had degenerated as a result of reduction in its blood supply, and hence could not be dissected off easily. The first logical step was to separate it from the ovary. Then its anterior surface could be accessed for dissection. After its anterior surface was free, it could be separated from the floor of the pouch of , passing backwards up to the rectum. Thus the rectum could be protected during its separation from the leiomyoma. The serosal edges of the raw portion on the back of the uterus could be approximated easily. The ovary was sutured to the upper part of this suture line, covering it so as to prevent postoperative adhesions.[5] The defect in the peritoneum on floor of the pouch of and upper 0.5 cm of the anterior surface of the rectum was not sutured, as that would possibly kink the rectum. Placement of a drain locally ensured keeping the area dry and allow serosal healing.