Atypical Presentation Of Tuberculosis In Pregnancy

Pregnancy is an immunocompromised state and hence a pregnant woman is susceptible to tuberculosis.  Fever, weight loss and cough with expectoration – the classical symptoms may not be present in all cases. We present an unusual presentation of tuberculosis in pregnancy.

accounts for a third of the burden of all tuberculosis cases in the world. The disease is responsible for a very high rate of maternal morbidity and mortality. Atypical presentation may lead to misdiagnosis or delay in diagnosis, also the absence of systemic symptoms does not rule out tuberculosis. A high index of suspicion is required for accurate diagnosis.

A 30 year old primigravida married since 2 years, with 16 weeks of gestation presented with  cough on and off since 1 month. There was no expectoration, fever, weight loss or any other complaints. She weighed 60 kg, was vitally stable; respiratory system was clear, and obstetric findings were corresponding per abdomen. All routine investigations were normal. She only had cough without expectoration starting at about 12-14 weeks. She was given symptomatic treatment for the same. When the cough persisted, amoxicillin was given for a week. However the cough persisted and so a pulmonologist’s reference was taken. Her FEV was reduced. A differential diagnosis of gastric reflux or cough variant asthma in pregnancy was kept. As there was no sputum production, sputum examination was not possible. She was started on foracort rotacaps, and tab esomeprazole. After 20 days of this therapy with not much benefit, a chest radiograph was obtained, which showed a cavitatory lesion of 1.5x 1.5 cm in left upper zone of the lung. She was started on category 1 antituberculosis therapy (AKT). Nebulization with hypertonic saline was given and then sputum collection was tried. Two of the 3 samples did not have sputum and had saliva only. Sputum AFB was negative. Culture was done and line probe assay showed 1-19 colonies of M. tuberculosis resistant to isoniazid but sensitive to rifampicin. She showed drastic improvement after starting AKT and the cough stopped within ten days. Four drug AKT was continued and the patient was asymptomatic throughout the antenatal period. A repeat chest radiograph after 2 months of therapy showed complete resolution of the cavitatory lesion. She went into spontaneous labor and delivered a female child of 2.54 kg by cesarean section for non progress of labor. The baby was investigated for tuberculosis – USG abdomen was normal and so was placental histopathology. Repeat chest radiograph at 6 months also showed complete resolution of the lesion. 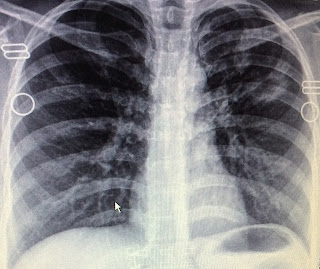 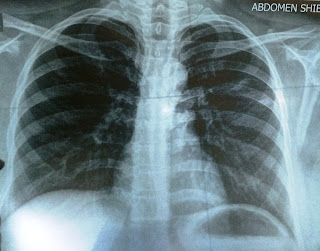 Tuberculosis presents similarly in pregnant and non pregnant[1] but diagnosis may be delayed by the non-specific nature of symptoms[2] and the presence of fatigue and malaise in pregnancy.[3] The most common site in pregnancy is pulmonary. Good et al reported patients with culture positive disease-74% had cough, 41% had weight loss, 30% had fever, malaise or fatigue, and 19% had hemoptysis; 20% had no symptoms but all had abnormal X-Rays.[1] Moreover, women with tuberculosis in pregnancy tend to postpone having chest radiography which complicates the diagnosis even further.[2] . Chest radiography, which is a simple investigation, does not carry much harm to the fetus and can help in the diagnosis. Short course chemotherapy trials have shown that 6 month regimens of rifampicin  isoniazid, pyrazinamide and ethambutol followed by 2 months rifampicin and isoniazid is the treatment of choice for tuberculosis.[4,5] However drug resistance is becoming highly common and the therapy has to individualized.
Maternal and fetal outcomes in pregnancy vary with the site of the tuberculosis and the timing of diagnosis in relation to delivery. In those with a late diagnosis, obstetric morbidity is increased fourfold and preterm labor ninefold.[6] A higher frequency of abortion, toxemia, and intrapartum complications have been reported.[7] The fetus can only be infected in utero via the umbilical cord. This is however very rare.

One should not ignore cough in pregnancy and any cough lasting more than 2 weeks should be thoroughly evaluated. Clinicians should remember that tuberculosis may be sputum negative and may have atypical manifestations and that a negative sputum report only gives a false sense of relief that all is well. However a simple investigation like chest radiography will help in clinching the diagnosis. Early diagnosis and prompt treatment can prevent maternal and perinatal morbidity and mortality.