Struma ovarii is a very rare but most common and specialized form of monodermal teratoma. Boettlin, in 1889, was the first to report and describe this entity, after observing the presence of thyroid follicular tissue in ovary. The term struma ovarii is reserved for only those monodermal teratomas when the proportion of thyroid tissue present must be more than 50% of the overall tissue. [1,2,3] Coexistence of this rare variant with surface epithelial tumors is very rare. To the best of our knowledge only two cases of concomitant struma ovarii and serous cystadenoma have been reported in English literature [4,5]. Here we present a rare case of concomitant cystic struma ovarii with serous cystadenoma. 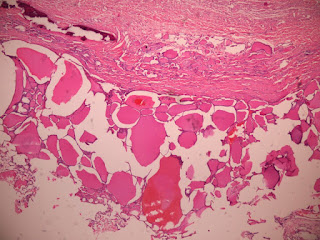 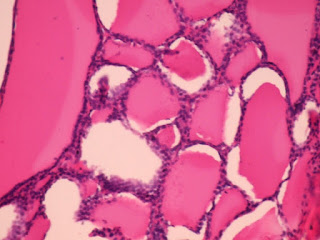 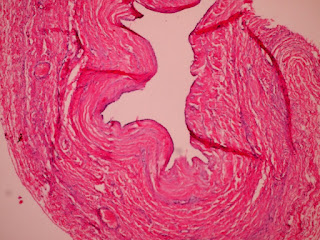 Bilateral fallopian tubes, contra-lateral ovary and uterus with cervix showed normal histology. Immunohistochemistry with TTF-1 (Thyroid Transcription Factor – 1) was done and showed strong positivity in follicular epithelium while the areas with appearance of serous cystadenoma were absolutely negative Hence the diagnosis of concomitant cystic struma ovarii with serous cystadenoma has been confirmed. 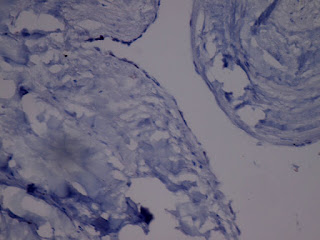 Very rare occurrence of concomitant struma ovarii with serous cystadenoma has been reported only in two case reports. Struma ovarii is defined as a monodermal highly specialized mature teratoma composed either exclusively or predominantly of thyroid tissue or in which thyroid tissue can be recognized macroscopically. They may have features similar to thyroid adenoma or carcinoma (malignant struma ovarii) or both.[1,2,3]
Struma ovarii accounts for 0.3–1% of all ovarian tumors and for 3 % of all mature teratomas. Approximately 5-15 % of mature cystic teratomas show variable proportion of thyroid tissue; however proportion of thyroid should be more than 50 % to classify it as struma ovarii.[1,2,3] Struma ovarii have also been reported with coexisting non-germinal epithelial tumors such as mucinous cystadenoma, Brenner’s tumor, and serous cystadenofibroma.[6,7]
Struma ovarii is commonly seen in older patients than for those with common mature teratomas.[8] Although these patients may experience variety of symptoms similar to all other ovarian tumors, abdominal pain and a palpable lump are the most common symptoms observed. Rarely vaginal bleeding, ascitis (up to 33% cases) and pseudo Meig's syndrome (< 10 cases) are also reported in the literature. [1,2,8] The patient described in this report presented with abdominal mass which is the most common symptom and was 55 years old.
Macroscopically, typically the tumor is brown or green-brown, predominantly solid and gelatinous. A presence of a green to brown glairy fluid is a clue to the diagnosis.
Cystic struma ovarii is very rare.[1,2,8] Recently Szyfelbein, Young and Scully described a series of 20 cases of cystic struma ovarii. Cystic variety of struma ovarii is extremely rare, which may make its identification difficult.[9] In our case, typical morphology and absence of TTF-1 in lining serous epithelial cells in contrast to positivity in follicular epithelium confirmed the diagnosis.
Till now only two cases have been reported of coexisting struma ovarii with serous cystadenoma in the English literature. In both these cases, it was unilateral and confirmed by IHC. Etiopathogenesis of this pathologic process has not been clear; metaplasia of serous epithelium can be the possible explanation.[4,5]
Usually non-functional struma ovarii may present with symptoms and signs of hyperthyroidism, due to autonomous activation of the thyroid tissue, seen in only 8 % of patients. Struma ovarii may demonstrate all pathologic patterns that are seen in the thyroid, including malignancy in 5 -10% of cases in the form of papillary and follicular carcinoma.[1,2,3,10,11]

Knowledge of these rarely associated coexisting pathologies and extensive thorough sampling of cyst along with IHC is required for the accurate diagnosis in this otherwise benign condition as they are difficult to diagnose before surgical intervention.