Cesarean scar ectopic pregnanacy is one of the rarest form of ectopic pregnancy. it is presumed as a result of migration of embryo through defect in scar. Here we present Such a case managed conservatively. It ended in formation of a lithokelyphos. This is the first case of lithokelyphos formation in a cesarean section scar in the world literature.

Ectopic pregnancy in cesarean section (LSCS) scar is the rarest form of ectopic pregnancy.[1] It is characterized by the gestational sac being completely separated from the uterine cavity and completely surrounded by myometrium and LSCS scar. Its incidence seems to be on the rise, either because of an increase in rate of cesarean sections or an increase in evaluation of early pregnancy by transvaginal ultrasonography(USG).[2] Its clinical presentation varies a lot - painless or painful vaginal bleeding, lower abdominal pain, or severe hemorrhagic shock. Some cases may be asymptomatic. If not treated, there can be complications like rupture and severe hemorrhage. In some cases the pregnancy may continue to grow and the placenta maybe morbidly adherent in the lower segment.[3,4] There are different modes of management of  LSCS scar ectopic pregnancies, medical or surgical.[5,6,7,8,9] We present a case that was successfully managed by observation alone. It progressed to formation of a lithokelyphos. This is the first case of lithokelyphos formation in a cesarean section scar in the world literature.

A 24 year old woman, married for 3 years, para presented with a complaint of 3 months of amenorrhea and spotting per vaginum for 1.5 months. There was no history of abdominal pain. She had undergone a cesarean section in past. Her medical and surgical history was not contributory. She was not using any contraception. She gave a history of consumption of mifepristone and misoprostol for achieving a medical abortion 1.5 months ago. She had not passed any products of conception after that. Her vital parameters were normal. Her general and systemic examination revealed no abnormality. Abdominal examination showed a Pfannenstiel scar but no tenderness, guarding, rigidity or lump. Bimanual examination showed the uterus to be mildly enlarged and soft. There was no tenderness or vaginal bleeding. She had reports of transvaginal ultrasonography (USG) and magnetic resonance imaging (MRI) performed 5 and 4 prior to presenting at our hospital. The USG showed a 4x3 cm mass without any fetal pole with decidual reaction reaching up to serosa. The MRI showed a 48x44x21 mm irregular gestational sac in lower uterine segment with diffuse thinning of anterior myometrium and decidual reaction reaching up to serosa. USG performed in our hospital showed a heterogenous mass measuring 3.5x25x3.1 cm in lower uterine segment, with scar thickness 3.5 mm. A diagnosis of cesarean section (LSCS) scar ectopic pregnancy was made. Her hemoglobin was 8.5 g/dl. Remaining hemogram, urinalysis, liver and renal function tests were normal. Serum βhCG level was  3867 mIU/ml. It fell to 2711 mIU/ml after 8 hours. She was counselled about various treatment options. She opted for observation for spontaneous resolution of the LSCS scar ectopic pregnancy. She was give a transfusion of two units of packed red blood cells. Then she was discharged from the hospital with instructions to report immediately in the event of vaginal bleeding or acute pain in abdomen. Serum βhCG levels were 427, 127, 47, and not detectable 1, 2, 3, and 7 weeks later. However her pelvic USG did not show any resolution of the lesion in this period. The mass remained of a size 3.5x25x3.1 cm. It showed deposition of calcium in its walls during the last of the three USG scans performed on her. She was prescribed hematinics for a month and counseled about the risk of rupture of the scar in a future pregnancy at the site of the ectopic pregnancy with litokelyphos formation. She opted not to undergo any surgical treatment for its removal and not to have any more pregnancies. 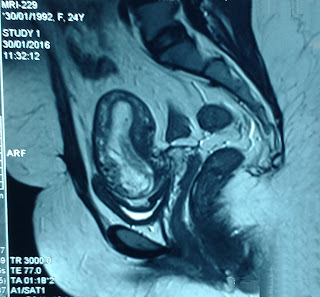 The first case of LSCS scar ectopic pregnancy was reported by Larsen and Solomon.[10] The risk of it development is increased further by past myomectomy, manual removal of placenta, dilatation and curettage, in vitro fertilization and embryo transfer, and adenomyosis.[11] Early evaluation by transvaginal USG of a woman with previous LSCS is important in making an early diagnosis of LSCS scar ectopic pregnancy. Diagnostic features include absence of trophoblastic tissue in the uterine cavity and cervical canal, presence of a gestational sac between the anterior wall of the uterus and adjacent wall of the urinary bladder, and thin or absent myometrial layer between the urinary bladder and the gestational sac. If it is less than 8 weeks’ size, a triangulas mass fills the niche of the scar. If it is more than 8 weeks’ size, the shape is rounded. Trophoblastic activity is confirmed by Doppler study.[11]

Medical treatment is preferred so as to preserve fertility. It is with systemic or local methotrexate administration. Surgical treatment options include rapid cervical dilatation and evacuation by suction and curettage, hysteroscopic removal, laparoscopic removal, and uterine artery embolization, and removal by laparotomy. Use of high energy focused ultrasound combined with curettage has also been reported.[12] Abdominal hysterectomy may have to be performed as a last resort in some cases to control hemorrhage in an advanced, ruptured LSCS scar ectopic pregnancy. In our case the patient had ingested mifepristone and misoprostol without medical prescription and supervision. Fortunately the ectopic gestation did not rupture and cause a life threatening hemorrhage. These drugs must have caused fetal demise. So her serial serum βhCG levels were found to be falling. That suggested that her ectopic pregnancy might resolve without and intervention. However that did not happen. The mass remained of the same size, and its walls got calcified, forming a lithokelyphos. A problem with observation or medical treatment is that the defect in the lower segment scar remains, and is likely to rupture in a future pregnancy. With the formation of a lithokelyphos, the risk is possibly increased further. Since cesarean scar ectopic pregnancy and its treatment conservatively are relatively recent, follow up of patients so treated is essential over a few years to see if this risk is real.