Both ovarian torsion and ovarian ectopic pregnancy are rare entities and can be easily missed unless one has a high degree of suspicion. The incidence of ectopic pregnancies after an in- vitro fertilization (IVF) procedure is 3 to 5 times higher than that of the general population and is reported to be in the range of 1 - 5 %.  We present here a case of a 35 year old female who underwent an IVF procedure following which she had an ovarian ectopic in the right ovary and a left bulky ovary which underwent torsion at the same time. Both these complications were picked up early and successfully tackled laparoscopically conservatively.
Introduction
Despite the fact that the incidence of ectopic pregnancy is increasing, occurrence of ovarian pregnancy following in vitro fertilization (IVF) and embryo transfer (ET) is uncommon. Ovarian ectopic contributes to 0.5-3% of all ectopic pregnancies[1] while the incidence of ovarian ectopic following an IVF procedure has been reported to be 0.3 %.[2] Torsion of a stimulated unilateral ovary occurring after IVF is an unusual event.[3] Ovarian torsion should be suspected in all females undergoing ovulation induction for IUI or IVF, who present with severe abdominal pain. Delay in diagnosis and management may lead to necrosis of ovary.

The patient was 35 year old with primary infertility of 5 years. She had regular cycles with normal hormonal profile. Her husband had mild oligo-asthenozoospermia. She had five attempts at ovulation induction with intrauterine insemination which were unfruitful, after which controlled ovarian stimulation with IVF was planned. After luteal phase down regulation with leuprolide acetate, stimulation with recombinant follicle stimulating hormone was done. Oocyte retrieval was carried out on day 14 of cycle. Right ovary was 7 × 7 cm and left ovary was 6 × 7 cm. She had moderate ovarian hyperstimulation syndrome (OHSS) managed conservatively with intravenous albumin, fluids and high-protein diet.
On day 15 after ET, her β hCG was 626.8 IU/l and on day 18, it increased to 4782.4 IU/l. A transvaginal scan showed a thickened endometrium of 14 mm with multiple hemorrhagic small cysts in the right adnexa and few follicles in the left ovary. No intra- or extrauterine gestational sac could be demonstrated. Patient was kept under close observation for 24 hours as she had no complaints and the rise in β hCG appeared adequate, if the possibility of multiple gestations were considered.
On day 18 after ET, she presented with severe right sided abdominal pain with increasing severity in next 1 hour. On examination, she had tachycardia 110/min, blood pressure of 100/70, respiratory rate of 22/min. She had abdominal distension, severe guarding and tenderness and abdominal girth 100 cm. Ultrasound was done which suggested enlarged bilateral ovaries: right ovary 8 × 10 cm and left ovary 8 × 7 cm with multiple cysts, moderate fluid in the pelvis; intra uterine gestation sac was not visualized.
Patient underwent an emergency laparoscopy and the findings were as follows: there was collection of blood and blood clots, approximately 150 ml, in the peritoneal cavity. Right ovary was bulky and stuck to the right ovarian fossa. An ectopic pregnancy was seen, which was bleeding after separating from the ovarian fossa. The ovary was held with grasper forceps and a wedge resection of the ovary along with the ectopic pregnancy was done using harmonic scalpel. Remaining ovarian tissue was observed and hemostasis confirmed.
The left ovary was bulky and had one twist over the pedicle. The ovary was not yet gangrenous and hence only de-twisting was done. Histopathological examination confirmed an ovarian pregnancy. Patient was uneventful postoperatively and is planned for IVF again. 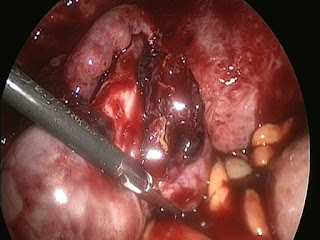 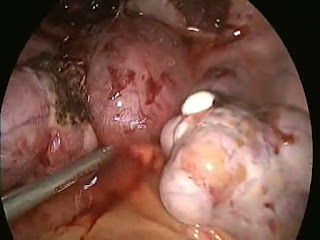 The presence of two different rare pathologies, i.e. ovarian ectopic pregnancy on one side and ovarian torsion on the other side, presenting at the same time makes this case an unusual one. The ovarian ectopic could be because of reverse migration of the embryo due to deep deposition of the embryo into the uterus.[4] It is suggested that an ovarian ectopic may also be the result of using a large volume of culture fluid during the transfer.[5] Other factors predisposing an ovarian ectopic include pelvic inflammatory disease and tubal pathologies.
Ovarian torsion is defined as "partial or complete rotation of the ovarian vascular pedicle which causes obstruction to venous outflow and arterial inflow".[6] Torsion after stimulation of ovary is rarer. Ovarian torsion can occur in females at any age but usually pregnancy and infertility treatment predisposes its occurrence. Symptoms are nonspecific and they classically present as sharp localized pelvic pain and tenderness with a palpable mass with peritoneal signs. Conventional USG combined with Doppler is the gold standard for imaging of lower abdominal pain in females.[7] But since in our patient showed signs of an emergency, we could not send her for an ultrasound.
During laparoscopy we could identify easily the ovarian ectopic and the twisted ovarian pedicle of the other side. Although the twisting had occurred, there were no signs of necrosis and de-twisting was done. As selective excision of the gestational sac in the ovary is the treatment of choice,[8] we did a wedge resection of the ovary including the ectopic pregnancy. Hemostasis was achieved successfully.
There are some reports showing the use of systemic methotrexate for an ovarian ectopic. Successful treatment with 50 mg methotrexate injected directly into the ectopic sac of ovarian pregnancy at laparoscopy has also been reported.[9] Because of the limited reports available, in contrast to tubal pregnancies, the factors which predict success of methotrexate in management of ovarian ectopic pregnancy are not well defined.
It is our belief that laparoscopic management is the standard for diagnosis as well as treatment of ovarian pregnancy and/or ovarian torsion.