Ovotesticular disorders are rare disorders. Karyotype associated with these disorders usually are 46XX. However, 46XY, and mosaics like 46XX/46XY, 45X/46XY all have been documented. These are grouped together in the ‘Disorders of Sex Development’ (DSD).

A 19 year old person reared, as a male, uneducated, farmer by occupation belonging to a low socio-economic background presented with complaints of gynecomastia and cyclical hematuria. This individual was born at home, and the delivery was conducted without any birth attendant.  Though the parents noticed ambiguous genitalia at birth, no medical advice was sought.  On examination sexual maturity rating (SMR) was Pubic hair (P)5; Breast (B)5. Patient had a phallus of 4 cm in length, with no urethral opening. Single small perineal opening was present. No gonads were palpable. Hormonal studies were sent and all values were normal for a female genotype. Karyotype was 46XX. Ultrasound (USG) of the abdomen and pelvis was suggestive of normal uterus, and presence of bilateral gonads, most likely to be ovaries. Cystourethrogram showed no evidence of fistula. Magnetic resonance imaging (MRI) showed presence of mullerian structures. It showed normal vagina, normal bladder, membranous urethra opening into penile urethra of length 4.7 cm and a rudimentary external visible penis was seen. No structures similar to testes in morphology or signal intensity was seen. 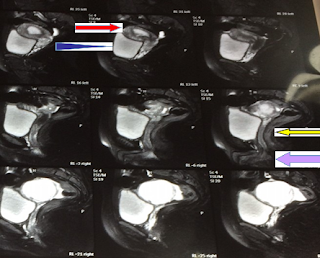 Figure 1. MRI of genito-urinary structures. Red arrow shows the uterus, blue arrow head is the urinary bladder, yellow arrow is the vagina and the lavender arrow is the phallus.

Patient followed up after 1 year with complaints of acute abdominal pain in the emergency room. USG showed torsion of the right gonad. Patient underwent emergency right gonadectomy for the same. Left gonad was adherent to the sigmoid colon and hence was left untouched. Histopathology examination of the gonad showed ovarian tissue consisting of stroma with primordial follicles and testicular tissue consisting of seminiferous tubules. Hence, diagnosis of 46XX ovo-testicular disorder was made. Patient further underwent hysterectomy with left gonadectomy a year after the first surgery and bilateral mastectomy six weeks after  hysterectomy. The patient will undergo reconstruction of a penis along with hormonal treatment with testosterone.

The term ‘Disorders of Sex Development’ (DSD) was given to conditions where disharmony between chromosomal, anatomical and gonadal sex exist.[1]
Ovotesticular disorders are rare disorders, accounting for less than 10% of the developmental sexual disorders, with genital ambiguity occurring in 1 in 4500 births.[2]  Most common karyotype associated with these disorders are 46XX, uncommon being 46XY, mosaics like 46XX/46XY, 45X/46XY. Molecular basis of these disorders are not known but autosomal recessive cases have been reported. They are classified on histopathological examination as lateral when testis is on one side and ovary on the other; unilateral when ovotestis is on one side and testis or ovary is on the other side, bilateral when both side ovotestis is present.[3] A study done by Krob et al, found that the most common type of gonad was ovotestis (44.4%), followed by ovary (21%) and testis (12.5%). Ovarian tissue was most commonly found on the left side and testis on the right for unknown reasons.[4]  Gonadal tumors in these patients occur in 2.6 % of the cases, the testicular component more likely to get malignant. Dysgerminomas, seminomas, gonadoblastomas, yolk sac carcinomas have all been reported.[5]
These disorders have varied clinical presentations. Most present with ambiguous genitalia with various degrees of virilisation, though normal female genitalia may be present rarely. Rarely individuals present in puberty with secondary sexual characters contradicting their sex. Approach to such patients is very challenging. Matsui et al reported 8 patients, wherein one of them was diagnosed 7 years after the first visit.[5] It’s a social and medical challenge, as proper assignment of sex, medical, surgical and psychosocial interventions are needed. Involvement of the neonatologist, obstetrician, psychologist, urologist, endocrinologist are needed. After determining the sex of the individual, surgery with biopsy to determine the gonads is done. Accordingly, contralateral gonad is removed and reconstruction of external genitalia is done.  Having one on one parental discussion about the future prospects of such patients on issues like fertility, their gender assignment, the mental acceptance of the condition by the child, it’s effects on his or her mental status is of utmost importance.
Conclusion

Approach to ambiguous genitalia involves meticulous history taking, thorough examination, with multiple imaging studies for genito-urinary anatomy, and karyotyping for genetic sex. Various surgical  approaches may be required. Realization that these surgeries are necessary but may not be 100 % successful in helping the individual lead a proper sexual life, and fertility could be compromised mandates one on one discussion. Understanding the psychosocial aspect of such patients help in better treatment.