A 20 year old gravida 2 para 1 living 1 abortion 1 presented to emergency room with acute onset abdominal pain, abdominal distension, fever and malaise. After a 3 month period of preceding amenorrhea (pregnancy confirmed by urine pregnancy kit), she had a spontaneous abortion at home. She denied any history of intrauterine manipulation. She presented 3 weeks after this abortion. The symptoms started gradually after the abortion and progressively increased. Following this, she presented to a hospital and underwent examination and ultrasonography (USG). Though this report was not available to us, she was told that USG did not show any evidence of retained products of conception. However, in view of persistence of symptoms, she presented to our hospital. Though main complaints were abdominal pain and distension, she did not have any bowel related symptoms. She had tachycardia with a pulse rate of 120 beats/ minute, blood pressure of 100/60 mm of Hg and she was very pale. Cardiovascular system examination was unremarkable apart from tachycardia and respiratory system was normal. Abdomen showed guarding, tenderness and distension. Bowel sounds were present. Per speculum examination showed foul smelling, purulent discharge from the cervix and no local lesions were visualized. On vaginal examination size of the uterus could not be made out, cervical motion tenderness was present, os was closed and there was no bleeding. Swab was collected and she was started on empirical antibiotics in view of white blood cell count of 19200/ mcL with neutrophilia of 80 %. Lymphocyte count was 20%. She was seronegative. Two units of packed red cells were transfused in view of hemoglobin of 3 gm% after administration of parenteral frusemide. Ultrasonography (USG) was suggestive of continuous tubular structure arising from left side of the uterus crossing over to the right side with echoes and gross ascites. Features were suggestive of acute pelvic inflammatory disease with pyosalpinx and pyoperitoneum. Serum creatinine was 1.7 mg/dl. CT scan confirmed the findings of USG and also identified retained products of conception measuring around 2x2 cm.  She was not seropositive . In view of sepsis and poor general condition of the patient, decision of insertion of a pigtail catheter was taken. A decision for exploratory laparotomy in the event of non-improvement was was the next plan of action. Pigtail catheter was inserted under ultrasonographic guidance in the right iliac fossa under all aseptic precautions. About 1800 ml of foul smelling pus was drained and sample was sent for aerobic, and mycobacterial culture. Hemoglobin increased and creatinine normalized. After stabilization and under antibiotic cover dilatation and curettage was done and retained products of conception were removed. Specimen was sent for culture (aerobic and anaerobic). Review ultrasonography showed 30 ml residual collection with pyosalpinx. Five days later, a second pigtail catheter had to be inserted to drain a recollected 800 ml pus from the right paracolic gutter.  Bacterial culture of the pus grew E.coli sensitive to amikacin and parenteral amikacin in therapeutic dose was given for 14 days. Mycobacterial and anaerobic cultures were negative. She improved gradually, no further collection occurred, pigtail catheter was removed and she was discharged on day 17 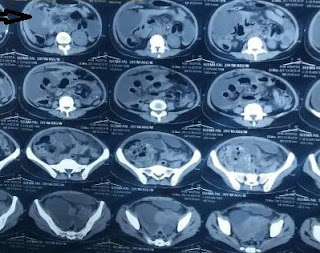 Peritonitis is inflammation of the serosal membrane lining the abdominal cavity and therein contained organs. In the current era where induced abortions are liberalized and  medically supervised, the occurrence of post-abortion infections has reduced.  Maternal death is infrequent in such conditions. However, about 2 percent of women with miscarriage develop pelvic infection and sepsis.[1] CDC has given clinical criteria of an inflammatory syndrome occurring within 2 to 3 weeks after spontaneous or induced abortion. [2]
Multiple organisms are implicated in the pathogenesis of PID. These include Neisseria gonorrhoeae, gardnerella vaginalis, haemophilus influenzae, and anaerobes such as peptococcus and bacteroides species. As polymicrobial growth is most common we used piperacillin tazobactum for gram positive organisms, metronidazole for anaerobic and amikacin for gram negative organism as an empirical formulation.[2]
PID may produce tubo-ovarian abscess (TOA) and rupture can result in peritonitis. Our patient also had a pyoperitoneum that extended upto the perihepatic region. Life threatening complication of acute rupture of a TOA may result in diffuse peritonitis and necessitate urgent abdominal surgery.[3] However, in our patient such a measure was not undertaken as she had severe anemia, was hemodynamically stable and her condition was not acute. Patients in whom surgery is deferred, computerized tomography must be done to exclude bowel injuries. Prior to insertion and drainage with a pigtail catheter it is essential to confirm that the collection is homogeneous and not loculated. Blockage of the catheter placed may require manipulation or sometimes change of the catheter. Also, large or recurrent infected collections may require multiple catheter placements.[4]
Intrauterine retention of products of conception associated with post-abortion endometritis must be evacuated either by medical or surgical methods. [5] The curettage material obtained in our case did not grow any organism. Studies have demonstrated curettage to have better outcome as compared to conservative management in patient with acute kidney injury.[6]
Studies have demonstrated risk of bowel obstruction due to adhesions, however there are no comparative studies to compare the incidences between surgical exploration and conservative management with a pigtail catheter.