Sepsis Due To Uterine Scar Necrosis

Puerperal sepsis after cesarean section may present with systemic manifestations. Post operative sepsis due to necrosis of lower segment cesarean section (LSCS) uterine scar is not very common. Here we are presenting a case of puerperal sepsis in a patient with lower uterine segment scar necrosis and dehiscence. An exploratory laparotomy was done and the necrotic tissue was excised following which broad spectrum antibiotics were continued.

Any bacterial infection of the genital tract within 42 days post-delivery is termed as puerperal sepsis. Proper aseptic precautions can prevent puerperal sepsis.[1] Post operative necrosis of the LSCS uterine scar is a rare occurrence.[2] Sepsis continues to be among the leading causes of maternal mortality in India, the other significant causes being preeclampsia and obstetric hemorrhage.

A 30 year old, para 2 living 1, married since 4 years, day 9 of emergency LSCS done at a private hospital was referred to the emergency department with complaints of pain in the abdomen since 2 days and abdominal distention since 2 days. She had history of fever since 1 day and 3 episodes of vomiting. There was no history of any major medical or surgical illness in the past. She was a known case of hypothyroidism on tablet levothyroxine 50 µgm. There was no history of any bowel or urinary bladder related symptoms.
Her first LSCS had been done 1 year ago and the baby had died at 4 months of age, the exact cause was not known. The second LSCS had been done 9 days ago in view of previous LSCS at a private hospital and she delivered a female child of 2.7 kg. As per available operative notes the surgery was uneventful.
Her clinical examination revealed a pulse of 94 beats per minute, blood pressure was 130/ 80 mm of Hg, bilateral pedal edema grade 2 pitting was present. On abdominal examination, abdominal wall edema and gross ascites was present, Pfannensteil scar was healthy. On per speculum: cervix and vagina were healthy, no foul smelling discharge was noted. Vaginal examination revealed a midposed uterus but exact uterine size could not be assessed. A cystic mass was palpable in the left iliac fossa about 10 x 10 cm.
Hemoglobin was 11.2 gm %, WBC count 21860/ cu mm and platelet count of 1 lakh/ cu mm. USG showed a large complex left ovarian cyst with internal echoes suggestive of dermoid cyst. Gross ascites with internal septations were noted. CT scan was done which showed a 10 cm left ovarian cyst, with mild hepatomegaly. Specks of air were seen at the LSCS scar site. Fecal loaded colon was noted up to rectum. No evidence of small bowel obstruction was present.
An exploratory laparotomy was planned in view of suspected peritonitis. A general surgery reference was taken to rule out intestinal obstruction. Intra operative findings revealed 1.5 to 2 liters of inflammatory fluid with pus flakes present in the pelvis and peritoneal cavity. Suture line over the uterus was unhealthy with necrotic tissue seen protruding from the right side of the uterine incision, for about 2 - 3 cm in length. Greyish white necrotic tissue present over the uterine incision suture line was excised. Left ovarian dermoid cyst was seen of 7 x 8 x 10 cm with presence of pus flakes around it. Left oophorectomy was done. About  2 liters of wash was given with warm normal saline. Hemostasis was checked and confirmed. Two intra-peritoneal drains were placed, first in the pouch of Douglas and second, anterior to the uterus. The abdomen was closed in layers. 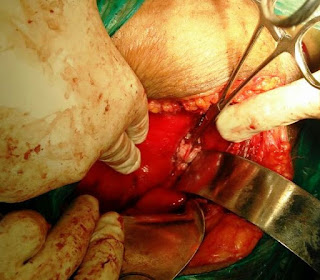 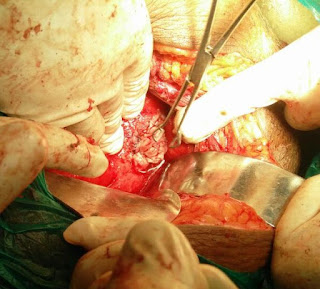 The patient was monitored strictly in the post operative period. Drains were removed on day 4 post operatively. Higher antibiotics were started and were continued for 7 days. The post operative period was otherwise uneventful. Pus culture showed enterobacter sensitive to piperacillin, which patient received along with metronidazole for 14 days. Excised necrotic tissue which was sent for histopathological examination showed multiple bits of fibrino- suppurative exudates with mixed dense inflammation, hemorrhage and fibrin. No viable tissue was seen.

The incidence of puerperal sepsis has declined remarkably due to the strict maintenance of asepsis in labor ward and operation theaters. There have been various predisposing factors for puerperal infection. Sepsis is more commonly seen with LSCS as compared vaginal delivery. The duration of rupture of membranes, repeated vaginal examinations, anemia and prolonged labor pose a risk for puerperal sepsis in case of vaginal deliveries.
Most common organisms involved in puerperal sepsis are bacteria from the female genital tract. The focus of infection in case of sepsis following cesarean section is the infected surgical incision. Fever is an important presenting feature in puerperium.
Necrosis of the uterine scar may occur due to infection of the scar site. In the immediate postpartum period it may present as secondary hemorrhage and can also lead to peritonitis. A high index of suspicion may be needed and radiological modalities can be used for confirmation.
In cases with post operative LSCS scar dehiscence exploratory laparotomy with repair has previously been considered to be the treatment, but due to the fragile nature of the infected tissue and excessive bleeding many patients may need hysterectomy.[4] Recently microsurgical laparoscopic repair have been reported.[3] In our case also, an exploratory laparotomy was done and the necrotic tissue was excised, no bleeding was encountered. There are reports wherein the scar dehiscence has been managed conservatively using only antibiotics for treating the infection and the uterine incision is allowed to heal by secondary intention.[1]

Puerperal sepsis is a largely preventable cause of morbidity and mortality. Aseptic precautions will help to reduce the rate of sepsis and its complications. Prompt diagnosis will require a high index of suspicion and confirmation by using radiological tests.