We present a case of necrotizing candidial funisitis. It was unusual in that there were no significant predisposing factors and no demonstrable source of infection. The lesions found were also different from the classical description.

Acute funisitis and chorionic vasculitis are fetal inflammatory responses to an amniotic cavity chemotactic gradient. They can result either because of intraamniotic infection or “sterile” intraamniotic inflammation which occurs in absence of demonstrable microorganisms. The prevalence of chorioamnionitis is 3-5% of placentas delivered at term as compared to 94% of placentas delivered between 21 to 24 weeks of gestation. The rate is higher in patients with spontaneous labour, ruptured membranes, preterm labour and clinical chorioamnionitis. We present here an unusual case of peripheral candidial funisitis.

A 28 year old woman, married for 5 years, gravida 4 para 1 living 1 abortion 2, presented to the emergency room with 37 weeks of amenorrhea and a complaint of leaking per vagina for 3 hours and labor pains for 0.5 hour. There was no history of fever or foul smelling discharge per vagina. She had undergone an appendectomy 2.5 years ago. She had been hospitalized at 29 weeks of gestation for threatened  preterm labour and iron deficiency anemia. She had been managed with tocolysis and iron therapy. There was no other contributory past history. Her anomaly scan showed fetal dextrocardia and normal situs (intrathoracic and intraabdominal). Her general condition was fair and vital parameters were within normal limits. Her systemic examination revealed no abnormality. Obstetric examination showed a single fetus of size of 34 weeks in vertex presentation. Fetal heart rate was 142 bpm, regular. Her uterine activity was 1 in 10 minutes, each contraction lasting for 10 seconds. A speculum examination showed normal vagina and clear, odourless amniotic fluid. A high vaginal swab was sent for microbiologic studies, which subsequently showed no growth. Vaginal examination showed the cervix to be 1.5 cm dilated and 30% effaced. There was a free leak of clear amniotic fluid. Her investigations showed Hb of 10 g/dl, white blood cell (WBC) count of 20900/cmm,  platelet count of 260X109/L, C-reactive protein 2.57 mg/dL, negative VDRL, nonreactive HIV, nonreactive HBsAg, and normal thyroid, liver and renal function tests. She was treated with parenteral amoxycillin and clavulanate, gentamycin and metronidazole in view of high white cell count and premature rupture of membranes (PROM). She progressed in labor slowly and developed acute fetal distress after 5 hours and at 3 cm cervical dilatation. There were repeated variable decelerations up to 90 bpm from a baseline of 110 bpm. An emergency lower segment cesarean section was performed and a male baby weighing 2.24 kg was delivered. Its 1 and 5 minute Apgar scores were and 9 and 10 respectively. The liquor was clear. The entire umbilical cord showed white tubercles measuring 2-3 mm in diameter (figure 1). The placenta and cord were sent for histopathological examination. Parenteral antibiotics were continued postoperatively. The baby was sent to the neonatal intensive care unit. The patient’s condition remained stable. There was no fever or foul smelling lochia. WBC counts were 24500/cmm on day 2  and 12300/cmm on day 04. Investigations of the baby showed early onset sepsis (WBC counts 29500/cmm and immature neutrophil to total neutrophil count ratio > 0.4). Hence the baby was given intravenous antibiotics (ampicillin plus sulbactam and amikacin). Neonatal 2 D-echo showed dextrocardia, a small ostium secundum type atrial septal defect, multiple small ventricular septal defects, a tiny patent ductus arteriosus with left to right shunt. Blood culture showed no growth. Parenteral antibiotics were continued for 7 days. Parents took discharge against medical advice for the baby on day 7 of life. Histopathology report was received after 15 days from birth. It showed mild vasculitis, acute on chronic funisitis, acute chorioamnionitis with focal distal villous hypoplasia. The inflammation was located at the surface of the umbilical cord suggestive of peripheral funisitis. Special stains for fungi – gomori methenamine silver (GMS) stain and periodic acid-schiff (PAS) stain showed yeast and pseudohyphae of candida  in the umbilical cord. All efforts to contact the patient and inquire about the health of the baby failed. 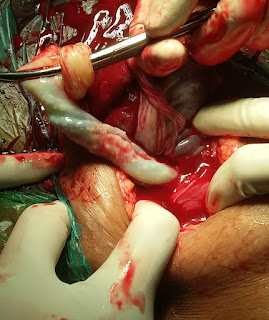 Acute inflammatory lesions of placenta and umbilibal cord consist of acute histologic chorioamnionitis, funisitis (inflammation of umbilical vein followed by arteries followed by Wharton’s jelly) and chorionic vasculitis.[1] The characteristic feature of acute chorioamniotis is diffuse neutrophilic infiltration.[2] It can result either because of intraamniotic infection or ‘sterile’ intra-amniotic inflammation which occurs in absence of demonstrable microorganisms.[3] In response to the infection, cytokines get released by endothelium, macrophages and mast cells. This creates a chemical gradient which attracts neutrophils. It may get augmented by some peptides released from the microorganisms. The prevalence of chorioamnionitis and funisitis is 3-5% of placentas delivered at term as compared to 94.4% of  placentas   delivered between 21 to 24 weeks of gestation.[4] The rate is higher in patients with spontaneous labor, ruptured membranes, preterm labour and clinical chorioamnionitis.[5,6,7] Pathways for microbiological invasion of amniotic fluid are ascending from lower genital tract (the commonest route), hematogenous, or iatrogenic (amniocentesis and fetoscopy).[8] The most common organisms found in the amniotic cavity are Mycoplasma genitalium, Ureaplasma species, Gardenerella vaginalis, Fusobacteria and Candida. Women who become pregnant with intrauterine contraceptive devices in situ are at high risk for infection with Candida albicans.[9,10] It can be polymicrobial (30% cases). Fetal response to microbial invasion is higher in preterm than term gestation (as microbial invasion is established before initiation of preterm labor). Hence the rate of neonatal sepsis is more in preterm babies.
The case presented was unusual in that there was no source of sepsis in the mother’s lower genital tract. There were no clinical symptoms suggestive of sepsis, and leucocytosis and raised levels of C-reactive protein were the only indicators of maternal sepsis. However, the lesions found in the umbilical cord were not due to bacterial infection but due to Candidial infection. Usually the lesions of candidial funisitis are seen as multiple, yellow or white, small plaques on the surface of the umbilical cord. In our case the lesions were rounded tubercles and not plaques. The placenta did not show any features of fungal infection. The mother remained well without any treatment for vaginal candidiasis, suggesting that those organisms must have been commensals. It was unfortunate that the parents took the baby home without treatment of the fungal infection and also of the cardiac lesions.