We report a case of bicornuate uterus with pregnancy in the left horn with an unusual presentation. It was diagnosed at 14 weeks of pregnancy. Patient was referred from a peripheral private nursing home with failed attempts at surgical evacuation for missed abortion. At our hospital, exploratory laparotomy with excision of the left gravid horn of the uterus was done.

Congenital malformations of female genital tract result from embryologic maldevelopment of the mullerian ducts either in their formation, fusion or absorption stage. They are the deviations from normal anatomy, representing a benign condition with a prevalence of 5.5% in general population.[1] Bicornuate uterus results from incomplete fusion of the two mullerian ducts leading to varying degrees of separation between two symmetrical uterine cavities ranging from partial separation to complete septation with no communication between the two cavities.[2] Bicornuate uterus is known to be associated with several obstetric complications; some of them include recurrent pregnancy loss, fetal malpresentation, intrauterine growth restriction, preterm labor, increased need for operational intervention including cesarean section.[3] Among these, the most common ones affecting the outcome of pregnancy are recurrent pregnancy loss (25%), preterm birth (15-25%) and cervical insufficiency (38%).[4] We are reporting one such case of bicornuate (bicornis unicollis) uterus with pregnancy in one horn.

A 20 year old, married since 2 years, gravida 2, abortion 1 with 13.3 weeks missed abortion on ultrasonography (USG), was referred from a private hospital in view of bicornuate uterus with failed repeated attempts at evacuation. She presented to a private consultant obstetrician with spotting per vaginum. Ultrasonography had showed a missed abortion of 13.3 weeks in the left horn of a bicornuate uterus with marginal placenta previa. Right side horn showed thickened endometrium. She was treated with tablet Misoprostol 400 microgram per vagina, followed by injection oxytocin 10 units intravenously. In view of failed attempt, she went to another private consultant where ultrasound guided aspirotomy was attempted but dilator invariably went into the non pregnant horn. Hence the procedure was abandoned and she was referred to our tertiary care center for further management.
She came to emergency receiving room 4 days later with complaints of abdominal pain and vaginal bleeding since past 4 days, and soakage of almost 4 pads per day. She also had complaints of giddiness since that morning. She had no significant past medical or surgical illness. Her menstrual history was normal with regular cycles previously. Her obstetric history revealed a previous spontaneous abortion at 3 months, 1 year back after which curettage was not done. Present pregnancy was a spontaneous conception.
Her vital parameters were within normal limit. General condition was fair. She was conscious, well oriented in time and space, and afebrile. Mild pallor was noted. Her pulse was 96 beats per minute with good volume, blood pressure was 110/70 mm of Hg. Respiratory and cardiovascular system examination were normal. On abdominal examination uterus was 14 weeks in size, and lower abdominal tenderness was noted. There was no guarding or rigidity. On speculum examination cervix, and vagina were healthy. Minimum bleeding through os was present. On digital vaginal examination external os admitted tip of finger, and internal os was closed. Uterus was 14 weeks in size.
Biochemical and serological tests showed a Hb of 8.9 gm%, WBC count of 11,800 /cumm, platelet count of 3.08 lakhs/cumm. Renal and liver function tests were within normal limits. Coagulation profile was within normal limits. Injectable antibiotics were started. Ultrasound pelvis showed missed abortion of 14 weeks in the left horn of a bicornuate uterus. Contrast enhanced CT pelvis reported a bicornuate uterus with gestational sac in left uterine cornua measuring 8.8x7.5 cms with fetal parts seen within. Exploratory laparotomy was planned electively. Intraoperatively, 15x15 cms sized left side horn of bicornuate uterus with pregnancy in situ was noted, uterine wall was thinned out and stretched with bluish products of conception. The right side horn of uterus that measured 6x5x4 cms was externally continuous with the left horn. The pregnant left horn communicated with only the right horn and had no communication with the single cervical canal as shown in the image (Figure1). Bilateral fallopian tubes and ovaries were normal. Excision of the left pregnant horn with repair of the uterine defect was done. Intra operatively she was given one unit of packed red cell transfusion as her pre-operative hemoglobin was 8 g%. She remained stable after surgery. Wound check was done and she was discharged with advice to use contraception for the next 6 months. Histopathology report confirmed the diagnosis of uterine horn with fetus and placenta. 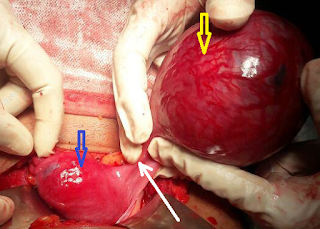 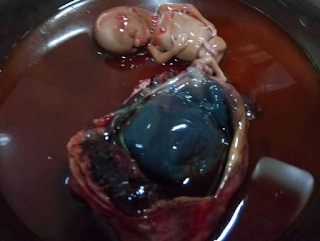 Figure 2. Excised left uterine horn with abortus (fetus with and the placenta)

Bicornuate uterus (bicornis unicollis) represents a double uterus with a single cervix and vagina resulting from the failure of the embryologic lateral fusion of the Mullerian ducts. Each uterus has a horn linked to its own fallopian tube and ovary. Bicornuate uterus is classified as class four according to the classification given by sub-committee of the American Fertility Society, now the American society of Reproductive Medicine.[5] According to the EAC (Embryological aberration, Anatomical abnormalities and Clinical features) classification of congenital malformations of the female genital tract, our case can be classified as UtR 6 cm Fn No Obs, UtL 15 cm Fn No Obs. That is, bicornuate uterus with right horn of 6 cms, functional and no obstruction, left horn of 15 cms, functional and no obstruction.[6] The pregnant left horn communicated with only the right horn and had no communication with the single cervical canal as shown in Figure1.  Uterine anomalies during pregnancy may be difficult to diagnose only by two-dimensional ultrasonography.[7] Recently three dimensional ultrasonography has been introduced as a non invasive diagnostic modality with good spatial awareness, hence it is considered to be superior to other modalities.[8] The incidence of rupture of the malformed uterus is 8-11 %.[9,10] This is due to inability of the malformed uterus to expand as pregnancy advances. In our case, the chance of pregnancy growing had it been live would be very little as already there was thinning of uterine wall. She was probably fortunate that the horn did not rupture as pregnancy ceased to grow. However, there have been several reports of varied clinical presentations of pregnancy in a bicornuate uterus in literature including rupture of the pregnant horn as well as successful outcomes with live pregnancy reaching upto term.[11,12] An ultrasonography early in pregnancy helps in diagnosing the uterine anomalies. Traditional treatment includes exploratory laparotomy with excision of the pregnant horn to prevent rupture and recurrence of the condition. A high index of suspicion is necessary to diagnose a case of Mullerian anomaly whenever we encounter cases that do not respond to induction of labor. Thereby catastrophic events like rupture of the pregnant horn and maternal mortality can be avoided.