The incidence of uterine perforation is often under-reported as many cases are not recognized or confirmed. For first and second trimester abortions (both induced and spontaneous) the risk is estimated at approximately 5/1000.[1] The incidence of myocardial infarction in pregnancy has been estimated to be 6.2 per 100,000 deliveries with a mortality rate of 5.1 – 11% in recent reviews.[2,3,4]

A 31-year-old lady, gravida 4, para 2, living 2, abortion 1, presented with 3 months’ amenorrhea and complaints of chest pain and breathlessness. She was admitted and evaluated in the ICU. On examination, her general condition was fair, afebrile, radial pulse was regular with a rate of 92 beats per minute, blood pressure was 130/80 mm of Hg and jugular venous pressure was within normal limits. On cardiovascular examination, both heart sounds were normal without any splitting or murmur. On respiratory examination, air entry was equal on both the sides with no crepitations or rhonchi. On obstetric examination, uterus was 12 weeks in size; ultrasonography report confirmed a single live intrauterine gestation of 12 weeks 5 days.
On ECG, there was presence of T wave inversion and Troponin T test was positive; hence she was diagnosed with acute cardiac ischemia and was managed in the emergency cardiac unit with anti-anginal drugs (nitroglycerine drip). Her ECG and Troponin T levels were repeated after 24 hours and were found to be normal. 2D echocardiography was normal with ejection fraction of 60%.
Her past obstetric history was significant. She had previous two full term normal deliveries followed by spontaneous incomplete abortion 5 years ago for which suction evacuation was done. The procedure was complicated with uterine perforation and herniation of intestinal loops into the uterus. She was immediately shifted to higher center and exploratory laparotomy was done. Intra-operative findings as per her previous papers showed a 1x1cm perforation in anterior uterine wall at the level of internal os. About 1.5 feet of intestine had herniated in the perforated uterus causing gangrene of the intestine, the gangrenous part was resected and end to end anastomosis was done and anterior perforation of uterus was repaired.
She was explained the risks associated with continuation of present pregnancy in view of previous perforation and ischemic cardiac changes; however, she did not want to undergo an MTP and wished to continue the pregnancy. She was discharged after one week of observation in the cardiac unit. On discharge, she was advised monthly follow up in the cardiology OPD but was not given any cardiac medicines.
She followed up regularly in the antenatal clinic. Her obstetric ultrasound showed normal growth and there was no evidence of adherent placenta on MRI. Fitness from cardiac point of view was obtained for emergency cesarean section if needed.
She presented at 36 weeks gestation with complaints of pain in abdomen; she was vitally stable and general condition was fair. On abdominal examination, she was clinically 36 weeks of gestation with cephalic presentation with minimal uterine activity, with fetal heart rate of 142 beats per minute. She had a midline vertical scar of previous exploration with no scar tenderness. On vaginal examination, cervix was tubular and os was closed.
Emergency lower segment cesarean section was done in view of previous history of uterine perforation. Intra-operatively, a thinned out vertical previous hysterotomy scar was seen on the anterior wall of the uterus from the level of the internal os till 2 cm below the fundus. Dense adhesions were present between the anterior wall of uterus and the urinary bladder. A band of adhesions was seen between the omentum and posterior uterine surface. Urinary bladder was separated from the anterior uterine wall by sharp and blunt dissection. A male child of 2.3 kg was delivered uneventfully who cried immediately after birth. There was no extension of the incision or intrapartum hemorrhage. She tolerated the procedure well. Her repeat ECG was normal and she did not suffer from any cardiac complications. Postpartum period was uneventful and she was discharged on day 6. 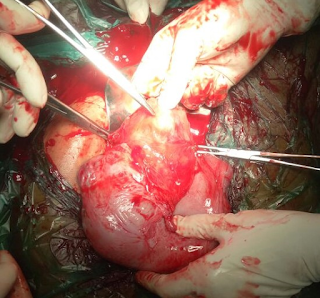 Figure 1. Demonstrating dense adhesions between the urinary bladder and the anterior uterine wall up to the fundus. 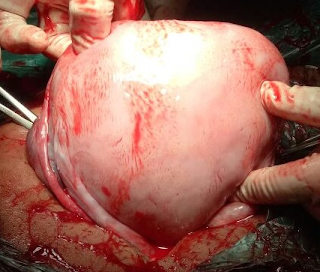 Uterine perforation is a dreaded complication of all intrauterine procedures. It may be further complicated by hemorrhage and sepsis. Uterine perforation can be associated with injury to blood vessels and surrounding viscera. The risk of uterine perforation is enhanced by conditions like pregnancy, menopause and cervical stenosis. The incidence of uterine perforation is often under-reported as many cases are not recognized or confirmed. It occurs most often during mechanical cervical dilatation or insertion of a sharp instrument. Distortion of uterine anatomy, uterine malposition and scarring of endocervical canal increase the risk further. It occurs most commonly at the fundus of the uterus.[5,6]
Pregnancy in patients with previous uterine rupture or dehiscence of a uterine scar is a high risk factor for repeated rupture or dehiscence usually associated with significant maternal and/ or fetal morbidity, and also increases the chances of cesarean hysterectomy if associated with morbidly adherent placenta. Therefore, it is better to avoid pregnancy women who had a previously ruptured uterus. In a study conducted by Fox et al in two groups of pregnant women with previous history of uterine rupture, there was no severe morbidity and 7% of their patients were found to have uterine dehiscence at the time of delivery.[7]
In cases of myocardial infarction, anterior coronary circulation is more commonly involved as compared to the posterior coronaries. Troponin T and I levels are specific to diagnosing cardiac ischemia correlated with ECG changes. Study on pregnant women with anterior wall myocardial infarction by Ladner et al reported that 38% infarctions occurred in antepartum, 21% in intra partum and 41% in post partum period.[8]

Uterine perforation is a dreaded complication which can occur during suction evacuation. Patients should be explained the risk of increased morbidity in future pregnancy and advised to avoid conception with history of previous uterine rupture if possible as it is associated with increased risk of rupture in subsequent pregnancies, though it is not an absolute contraindication. Similarly, pregnancy complicated with cardiac ischemia is associated with poor maternal and fetal outcome. Our patient had dual problem but meticulous antepartum, intrapartum and postpartum care can decrease the morbidity and yield a successful pregnancy outcome.