Choriocarcinoma is a high grade epithelial  malignancy. It develops from trophoblastic tissues. Its presentation is quite common in the reproductive age group. Persistent gestational trophoblastic disease occurring after a molar pregnancy is a life threatening complication which should be diagnosed early and promptly treated. Although complete molar pregnancies are rare, they are linked to a number of complications that also include invasive gestational trophoblastic neoplasia (GTN). In this study we report a case of a 21 year old young woman who presented one and half month after evacuation of a molar pregnancy. She had invasive and metastatic GTN complicated by uterine rupture and hemoperitoneum. This was successfully managed by exploratory laparotomy and hysterectomy.

Choriocarcinoma is also known as chorioblastoma. It is a rare form of cancer occurring in the female genital tract and commonly related to pregnancy. It may develop after a normal pregnancy, however, it is usually associated with molar pregnancy, ectopic pregnancy, miscarriage or abortion.[1]
Invasive metastatic gestational trophoblastic disease is quite uncommon in the emergency department, but it must be diagnosed and treated promptly and immediately to prevent serious complications. Gestational trophoblastic disease is a term that comprises of different forms that include hydatidiform mole, choriocarcinoma, persistent and placental site trophoblastic tumors. It may present with a bunch of symptoms according to the site and extent of invasion, but this disease process is very rarely documented in  emergency medicine literature.[2] We present a case of a young woman who came to us 45 days after having undergone a dilatation and evacuation of a molar pregnancy. She came with metastatic and invasive GTN leading to uterine rupture with hemoperitoneum.

A 21 year old female, G3A2 was referred from a peripheral small town with a history of amenorrhea since 1.5 month and complaints of abdominal pain and vomiting since 2 days. She had no history of vaginal bleeding. She had undergone a dilatation and evacuation of a molar pregnancy 45 days back. CT abdomen showed moderate hemoperitoneum and a mass eroding uterine surface that was suggestive of a gestational trophoblastic neoplasia.
She was married since 1½ year and had undergone dilatation and evacuation procedure twice. First was for vesicular mole in the first trimester in 2014 and second was in February 2015 for missed abortion. She did not undergo serial serum ß HCG investigation or any further evaluation after it. On examination she was averagely built, and had severe pallor. Her pulse was 120 beats/minute, and blood pressure was 80/50 mm of Hg. On palpation, her abdomen was distended with mild guarding. There was tenderness in the lower abdomen. On bimanual examination the uterus was soft and about 8-10 weeks’ size, all fornices had fullness and tenderness. She was stabilized with supportive care provided in the emergency department. Her baseline investigation showed hemoglobin (Hb) of 3 g/dL and ß HCG above 50000 mIU/L. She was shifted to the operating room for exploratory laparotomy. She was transfused with 4 units of packed cells and 4 units of fresh frozen plasma (FFP) intraoperatively. At laparotomy hemoperitoneum of about 1 liter was evacuated. The uterus had a tear on the fundus (cornua) of 1 cm length. A mass was protruding from this ruptured site (figure 1). The uterus was enlarged to size of approximately 10 weeks, bilateral ovaries and fallopian tube were  normal. The rupture site on the uterus was fragile and hemostasis could not be achieved by suturing the perforation site. As her condition was deteriorating decision for hysterectomy was taken. A total abdominal hysterectomy was performed with bilateral preservation of the ovaries. Hemostasis was achieved and a drain was placed in the peritoneal cavity. Tissue was sent for histopatological examination. She was shifted to the ICU. Her  investigations showed  a Hb of 5.8 g/dL, white blood cell count of 10000/cmm, platelet count was 85000/cmm. She  was transfused with 2 more units of packed cells and FFP in the ICU.   Broad spectrum antibiotics were given. After stabilization she was shifted to ward on the third postoperative day.
Histopathology report revealed a uterine malignant GTT, choriocarcinoma. Tumor size was  3.3x2.5 cm, tumor invasion of about > 50% of the myometrium, reaching up to the uterine surface; lymphovascular emboli were noted, perineural invasion was not seen. After 4 days, postoperatively ß HCG was  > 1 lac mIU/ml. Medical oncologist was involved for further management. HRCT of the chest was done which revealed lung metastasis, CT brain revealed no metastasis. She was discharged after 7 days postoperatively and was counseled for strict follow up for chemotherapy. Subsequently she did not follow up with us. 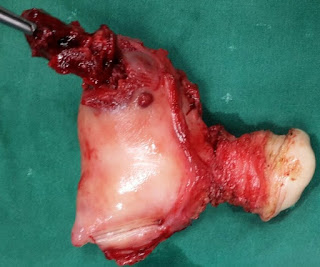 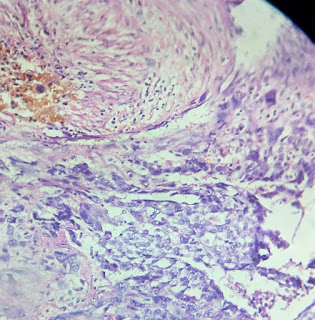 Gestational choriocarcinoma derived from a placental tissue is a malignant germ cell tumor that can be linked with any type of gestational presentation, usually a complete hydatidiform mole. Early metastasis to distant sites especially to the lungs, liver and brain is quite common. Its incidence fluctuates widely as 1 in 120 pregnancies in some parts of Asia and South America, as compared to 1 in 1200 in the United states. The occurrence of choriocarcinoma is 1000 times greater after a molar pregnancy than after a normal pregnancy. Majority of cases occur in women aged less than 35 year.[3]
It usually presents with amenorrhea and abnormal bleeding. It can also uncommonly present with an acute abdomen due to hemoperitoneum and uterine invasion and rupture as in our case. The presentation of hemoperitoneum along with uterine rupture is rarely seen in a case of choriocarcinoma. Various case reports in the literature have shown hemoperitoneum presentation secondary to hepatic metastasis, spleen metastasis or pulmonary metastasis. Hemoperitoneum occurring as a result of an invasive molar pregnancy is also common but is seldom seen in choriocarcinoma.[4]
When the diagnosis of GTN is suspected or established, a metastatic workup and evaluation for risk factors is undertaken. Along with a complete history and physical examination, the following laboratory tests should be obtained - complete blood cell count including platelets, coagulation studies, serum chemistry including renal and liver function panels, blood type and antibody screen, and quantitative serum ß HCG level. Recommended radiological studies include chest radiograph,  computed tomography (CT) scan of the chest if the chest radiograph is negative, CT scans of the abdomen and pelvis, and CT scan or magnetic resonance imaging of the brain should also be done. If the physical examination and chest radiograph are normal and in the absence of symptoms, other sites of metastasis are uncommon. Measurement of ß HCG in cerebrospinal fluid may be helpful in detecting brain involvement. Pelvic ultrasound or magnetic resonance imaging may also be useful in detecting extensive uterine disease for which hysterectomy may be of benefit.[5]
Although exact cause of uterine perforation is not known in choriocarcinoma, the theories mentioned below have been proposed to explain the condition
1. Trophoblast can invade uterine vein and blood vessels may be damaged. As a result of such damage, multiple infarction may occur due to thrombosis, vascular aneurysm and bleeding in the tumor.
2. In line with its hyper vascular nature, myometrial invasion may occur.
3. Depending on the chemotherapy regimen used, rapid trophoblastic death can lead to necrosis and eventually uterine perforation.
4. Presence of 90% necrotic choriocarcinoma mass led us to speculate that necrosis in addition to tumor invasion, may be the underlying cause of perforation.[6]
Treatment is based on classification into risk group defined by stage and scoring system. Patient with non metastatic [stage-1] and low risk metastatic [stage 2 and 3, score < 7] GTN  can be treated with single-agent chemotherapy, with resulting survival rates approaching 100%. High-risk GTN (stages 4, score > 7) requires initial multiagent chemotherapy with or without adjuvant radiation and surgery to achieve a survival rate of 80-90%.
Use of  the FIGO staging system is essential for patient with GTN to ensure best possible outcome with least morbidity.[6]
A patient with severe active intra-abdominal bleeding, usually requires a hysterectomy as a life saving measure. However conservative surgery is the preferred approach in patients with disease limited to the uterus and who wish to preserve their fertility. In the index case, total abdominal hysterectomy was performed as a live saving procedure. Uterine perforation caused by an invasive mole has been commonly reported in literature. But choriocarcinoma causing uterine perforation is a rare entity.

The risk for developing GTN is 0.1 % in the general female population. The common presentation is persistent vaginal bleeding after either a normal or molar pregnancy along with an elevated ß HCG level. The current case report emphasizes the need for health care professionals to follow established protocols for treatment of molar pregnancy and to consider rare causes of hemoperitoneum. Though the invasive mole usually presents with vaginal bleeding, perforation and hemoperitoneum, choriocarcinoma may also present with the same features and even without any vaginal bleeding. Since it is a rare clinical presentation, timely intervention in the form of surgery and chemotherapy can save a precious life. A high degree of clinical suspicion is needed for proper management of these cases.