A 35 year old woman came to our tertiary care hospital with pain in abdomen and vomiting since 3 days with  ultrasound (USG) scan suggestive of right ovarian mass of 16.6x11.6x 8.6 cm. CA 125 was 43 U/ml. Repeat USG done at our center was suggestive of large multiloculated lesion of 16x8x16 cm in right adnexa with thick septations within and large cystic components showing internal echoes. CT scan (pelvis) was suggestive of ovarian neoplasm with torsion. Emergency exploratory laparotomy was done. Intra-operatively a 17x17 cm ovarian cyst on right side with torsion at level of right cornua was encountered. Pedicle had two twists. Right fallopian tube and ovarian cyst were gangrenous with hemorrhagic fluid inside. Necrosed apex of the cyst had ruptured causing a hemoperitoneum.  Right sided salpingo-oophorectomy was done.

Ovarian torsion is one of the most common gynecological emergencies and a significant cause of acute lower abdominal pain in women of all age groups. The ovary along with its ipsilateral fallopian tube is typically involved. Ovarian torsion commonly occurs in a pathologically enlarged ovary. It is mostly unilateral. The torsion can involve the ovary alone or both the ovary and the fallopian tube (adnexal torsion). The right sided adnexa is more commonly involved (60%).

A 35 year old woman married since 8 years was referred from a private hospital with pain in abdomen and vomiting since 3 days with outside ultrasound (USG) scan suggestive of right ovarian mass of 16.6x11.6x8.6 cm. CA 125 was 43U/ml.
On admission, she was afebrile, pulse was regular, and good volume. Her blood pressure was normal. Systemic examination was normal. On abdominal examination, abdomen was soft with minimal guarding, a mass of about 26 weeks size was felt more on the right side of the midline and it was tender. Rigidity was absent. On per speculum examination minimal discharge was present. On per vaginal examination vagina was warm with tenderness in the right fornix. Cervical motion tenderness was present. Mass was felt to be arising from the right side and uterus was felt separately behind the mass.
Repeat USG done was suggestive of a large multiloculated solid cystic lesion 16x8x16 cm in the right adnexa with thick septations within and large cystic components showing moving internal echoes; largest cyst measuring 9x8 cm with no evidence of vascularity. Left ovary was normal. CT scan (pelvis) was suggestive of a well defined solid cystic lesion 16x12x13 cm with areas of necrosis in the right adnexa extending upto the right lumbar region with loss of fat planes. Features were suggestive of ovarian neoplasm with torsion. (Figure 1)
She had one episode of fever of 38.6º F. Serological and biochemical tests were negative except for elevated leucocyte count of 19,500 cells/ml with 80 % neutrophils. Prophylactic antibiotics were started. 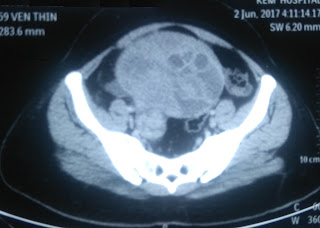 Emergency exploratory laparotomy was done. Intra-operatively a 17x17 cm ovarian cyst on the right side with torsion at level of right cornua was encounterd. It had two twists. (Figure 2). Right fallopian tube and ovarian cyst were gangrenous with hemorrhagic fluid inside (Figure 3,4). Necrosed apex of cyst had ruptured causing hemoperitoneum of around 300 ml. Right sided salpingo-oophorectomy done.  Right sided cystic fluid was sent for cytology and specimen was sent for histopathological examination. Postoperative period was uneventful. Histopathological examination studied from the ovarian tissue and fallopian tube showed extensive hemorrhagic necrosis, no viable tissue, features suggestive of torsion. 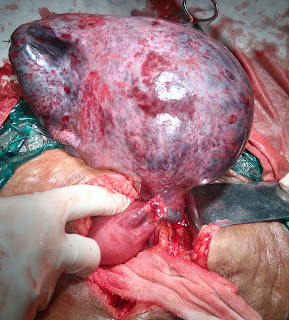 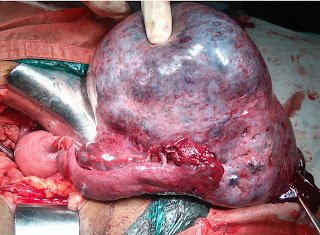 The occurrence of ovarian cysts varies from 5 to 15%. Complications such as rupture, torsion (15%) and rarely malignant changes (2%) may be seen. In adnexal torsion ovary and the fallopian tube undergo twisting. The ovary and the fallopian tube may rotate as a single entity in most of these cases.[1] About 3% of gynecologic emergencies are attributed to adnexal torsion and occur most commonly in women of reproductive age group. The other types of  torsion commonly seen are only ovarian and torsion of isolated fallopian tube. The right sided adnexa is more commonly involved,  mostly because of the restricted mobility of left ovary by the sigmoid colon.  The conditions with increased mobility of adnexal masses which predispose them to torsion are congenitally long utero-ovarian ligament and large ovaries (diameter > 6 cm).[2] The adnexal torsions are divided into 3 categories that are acute (< 24 hours), subacute (2 days) and chronic (> 3 days) depending on the time duration between onset of symptoms and surgical management.
In torsion compression of veins occurs followed by that of arteries leading to infarction and necrosis. The sequence of events leads to friable tissue which is prone for rupture. Hemorrhage in the cyst with subsequent rupture resulting into hemoperitoneum may occur especailly when diagnosis or treatment or both are delayed.
Subacute torsion with cyst rupture and hemoperitoneum presents with dull aching pain in lower abdomen and leucocytosis (as seen in our case) and subsequently hemorrhagic shock.[3]  The common causes of ovarian cyst rupture are idiopathic, torsion, malignancy, trauma, anticoagulation therapy and iatrogenic cause. The ovarian cyst rupture with minimal hemorrhage is mostly physiological. Pathological cysts are serous and mucinous cystadenomas, dermoid cysts and endometriotic cyst.
The initial investigation of choice is ultrasound (USG) in which twisted pedicle has been described as a bull’s eye target, whirlpool or snail shell.[4] Transvaginal color doppler sonography often shows disruption of normal adnexal blood flow. USG  is also the preferred initial investigation for suspected ovarian cyst hemorrhage or rupture. The findings are of an enlarged ovary containing bizarre mixed echoes in a reticular pattern like a spider’s web.  The blood clot within the cyst may ‘wobble’ in a jelly-like fashion on pressing with the  transvaginal probe. If significant hemorrhage is suspected or the cause is unclear, contrast-enhanced CT scan is often the investigation of choice.
Management includes either salvaging the adnexa or resection of associated cyst or tumor and oophoropexy. In cases presenting with hemoperitoneum stabilization may be required with blood and blood products transfusion. Removal of adnexal structures may be required in cases with necrosis or rupture. Detorsion of the involved adnexa can be attempted in early cases of torsion to salvage the ovary. The lesions of the ovary like ovarian cyst may be dealt with by cystectomy and ovarian reconstruction. Unilateral salpingo-ophorectomy is the most common surgical procedure done for adnexal torsion.[5]  Laparoscopy or  laparotomy can be done for surgical management of an adnexal mass. The surgical approach is chosen based on the degree of suspicion of malignancy, patients preference and surgeons expertise. To prevent retorsion, unilateral or bilateral oophoropexy can be done. This includes shortening of the utero-ovarian ligament using a running stitch through the ligament or either the ovary or the utero-ovarian ligament is sutured  to the posterior aspect of the uterus, the round ligament or the lateral pelvic wall.[6]

If this patient had reported early, the gangrenous changes could have been prevented by early intervention there by salvaging the ovarian tissue. This case highlights the importance of early detection and intervention in suspected cases of ovarian torsion especially in women of reproductive age group.