A Rare Case Of Uterine Rupture In An Unscarred Uterus

Uterine rupture is an uncommon entity in a scarred uterus and is rare in an unscarred one. Here we are presenting a case of uterine rupture in a 28 year old patient with 36 weeks of gestation with past history of an ectopic pregnancy and a spontaneous incomplete abortion for which check curettage was done.

A 28 year old, gravida 3, ectopic pregnancy 1 and spontaneous abortion 1 with 36 weeks of gestation had come to our emergency room with complaint of acute pain in abdomen and distention since 4 hours. She had past history of a check curettage which was done for spontaneous incomplete abortion 4 years ago and a right salpingectomy was done for an ectopic pregnancy 2 years ago. She was in immense pain, her peripheral pulsations were not palpable, carotid pulse rate was 120 bpm and blood pressure was 80/60 mm of Hg. On per abdomen examination, the uterine size and contour could not be made out and fetal heart sounds could not be heard. Abdomen was guarded and tender. On vaginal examination, cervical os was 1.5 cm dilated, 20-30 % effaced, and presenting part was not felt. There was no evidence of bleeding. On investigations, her hemoglobin, which was 12 gm% 4 weeks ago, had dropped down to 7.5 gm%, white blood cell count was 28,000/mm3 and platelet count was 2,00,000/mm3. She was immediately shifted to the operation theater for exploratory laparotomy with the clinical diagnosis of uterine rupture with hemoperitoneum and hemorrhagic shock. Intraoperatively, hemoperitoneum of 1.5 litres was drained and blood clots of approximately 900 gm were evacuated. A 2x2 cm rent in the fundus of the uterus was seen, close to the right cornua.[Figure 1] The placenta could be seen coming out through the rent. Baby was delivered by taking lower uterine transverse curvilinear incision. Unfortunately, it was a still birth of 3 kg. A drip of 20 IU oxytocin was started but the placenta was completely adherent to the anterior wall of the uterine cavity and could not be separated.[Figure 2] So, an emergency subtotal hysterectomy was done. She received 5 units of whole blood, 4 units of fresh frozen plasma and 8 units of platelets. Postoperatively, she was kept in ICCU for one day for monitoring and then shifted to the general ward. She was stable and was discharged on day 6. Histopathology examination report of the specimen was suggestive of placenta percreta. Suture removal was done on postoperative day 14 and wound was healthy. 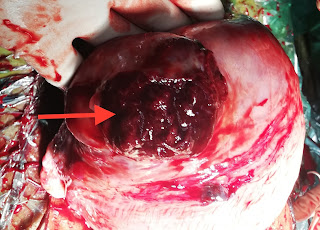 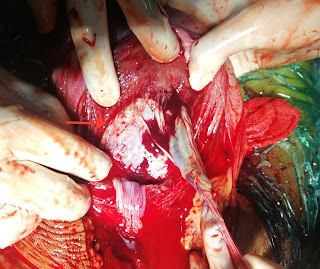 Uterine rupture causes significant morbidity and mortality in the mother and the fetus. There are various causes for such an event in an unscarred uterus such as obstructed labor, morbidly adherent placenta specially placenta percreta, injudicious use of oxytocin or prostaglandins and rarely intrauterine manipulations such as internal podalic version and breech extraction.[6]
In our case, the cause of rupture was placenta percreta which could have been because of overzealous curetting of the uterine cavity during previous check curettage. Vernekar and her coworker have published a case series of 13 cases of uterine ruptures in unscarred uteruses and found only one case in which uterine rupture was due to placenta percreta. Similar ruptures secondary to placenta percreta have been reported by Imseis et al and Esmans et al.[7,8] Esman et al reported a case of 14th week of pregnancy with previous history of manual extraction of the placenta  followed by a check curettage, came with complaints of severe abdominal pain. On performing a laparotomy a hemoperitoneum of 2500 ml and a fundal uterine defect of 4 cm with placental tissue penetrating through the uterine serosa was found which required a hysterectomy. In this case, just like ours, no placental morbidities were diagnosed on repeated antenatal ultrasound examinations. With increasing rates of curettages, morbid adhesions of the placenta should be ruled out by the sonologists to prevent such catastrophies in patients with previous history of check curettage.
Heemskerk and her team reviewed 13 cases of uterine rupture, where 8 cases had a past history of dilatation and curettage which had led to perforations and later to uterine rupture in subsequent pregnancies. It is possible that in our case also an undiagnosed perforation led to a scar and a defect. This defect on healing must have had deficient decidua which eventually led to placenta percreta and rupture at the onset of labor.[9]
Our patient also had right salpingectomy done a few years ago, but it is unlikely to be the cause of this rupture as there was a band of normal tissue between the right cornua and the rent. This rupture may have also occurred by the morbidly adherent placenta which reached the serosa and mimicked a rupture. A subtotal hysterectomy had to be performed in our case though in other cases conservative measures have been described.[10] However, considering that these conservative treatments are associated with a four-fold mortality rate as compared to hysterectomy, the latter is usually preferred in such a situation.[11] Also, besides prompt surgical management, effective fluid management and blood replacement is the key to good outcomes.

Uterine rupture in an unscarred uterus is uncommon and very often not an anticipated complication and therefore, it is important to spread awareness regarding its occurrence, risk factors and management amongst health care providers. Maternal and perinatal outcome can be optimized by awareness of risk factors, recognition by clinical symptoms, signs and prompt surgical intervention.