Intestinal Perforation Misdiagnosed As A Case Of Abruption

Abstract
Tuberculosis is a leading communicable disease in developing nations like India. Populations which are most prone to contract TB are those belonging to the pediatric population, seropositive status as well as immunocompromised individuals. Pregnancy is one such condition where the chance of developing TB is high. The diagnosis of extra pulmonary TB (EPTB) can often be very difficult due to the diffuse symptoms and nonspecific presentations, often mimicking inflammatory bowel disease or malignancy. We present a case of abdominal Koch’s in pregnancy, which was misdiagnosed to be a case of abruption placenta but resulted in intestinal perforation and preterm delivery. We present a case report to discuss the diagnosis of extra pulmonary TB, as well as its management in pregnancy.

Introduction
The diagnosis of EPTB can often be a tricky situation due to its nonspecific and varied presentation, as it can mimic inflammatory bowel disease or even malignancy. Immunocompromised persons are found to be more susceptible to EPTB.[1] Pregnancy is a relatively immunocompromised state and hence there is a predominance of TB in this state. Pregnancy confounds a clear diagnosis of extra pulmonary TB, as preterm labor and placental abruption which cause pain in abdomen may present a similar picture. Also, certain medical and surgical causes of abdominal pain, such as acute appendicitis, inflammatory bowel disease and acute pyelonephritis may present with a diagnostic dilemma. However, the diagnostic and treatment modalities in pregnancy are similar to those in the non-pregnant patients.

A 24 year old married woman gravid 3, para 2, living 1, death 1 with 24 weeks of gestation had presented with complaints of fever with chills since 7 days, intermittent per vaginum bleeding since 7 days with soakage of 2 pads per day, no passage of clots and complaints of abdominal pain for 2 days. She was a recently diagnosed case of sputum positive pulmonary tuberculosis and started on Category 1 AKT in the last 10 days. She had no other antenatal high risk factors. On general examination her condition was moderate, she was febrile, her pulse rate was 120 beats/min., BP was 100/70 mm of Hg, RS was clear, CVS had no murmur, and CNS had no focal neurological abnormality. In her investigations Hb was 6.9 gm %, WBC was 6900/cubic mm, platelet was 2.6 lakh/ml, BUN was 17.2 mg/dl, creatinine was 0.6mg/dl, serum electrolytes were within normal limit, USG abdomen was suggestive of single live intrauterine gestation corresponding to 23 weeks and 2 days. She went into preterm labor and had complaints of intermittent pain in abdomen for 2 hours. On examination uterus was 24 weeks, vertex presentation, engaged, FHS were regular and 200 bpm. Uterine contraction was 2/10/20. Uterine tenderness was present and it was tonically contracted. Clinical impression was of placental abruption. On per vaginum examination os was 2.5 cm dilated, 60 % effaced, vertex was at station 0, and membranes were present. Artificial rupture of membranes was done; liquor was clear and moderate in quantity. Intrapartum blood was given and labor was augmented with oxytocin. She delivered a fresh still born female child of 678 gm. There was no evidence of retroplacental clot or postpartum hemorrhage. Day 2 post-delivery she had complaints of severe abdominal pain and 3 episodes of vomiting. Her pulse was 110/min, BP was 100/60 mm of Hg. On per abdominal examination there was generalized tenderness and guarding. Urgent ultrasonography of the abdomen and pelvis was suggestive of suprapubic collection and the provisional diagnosis was of infection or hemorrhage. No gas under the diaphragm was seen on erect x-ray of chest and abdomen. CECT abdomen and pelvis was suggestive of peritonitis with sealed off perforation of distal bowel and adjacent loculated collection with air fluid level within and necrotic mesenteric lymphadenopathy. An emergency exploratory laparotomy was performed. Intraoperative findings were suggestive of bilious fluid in the entire peritoneum. Bowel loops, liver, spleen, uterus were studded with tubercles, bowel loops were clumped up, a stercoral perforation was seen 180 cm distal to the duodenojejunal flexure, and a non-passable stricture 120 cm from duodenojejunal flexure was also seen. Ileal resection and anastomosis of stercoral perforation with proximal diverting double barrel ileostomy at the site of the non-passable stricture was done. She was started on Meropenam injection 500 mg TDS, injection Metronidazole 100 mg TDS, injection Ofloxacin 200 mg BD, injection  Streptomycin 500 mg OD and category 1 AKT was continued. Resected specimen was sent for histopathological examination.  The diagnosis of intestinal tuberculosis was confirmed. Characteristic multiple caseating granulomas and non-necrotic lymphadenopathy were seen. She was admitted in the surgical intensive care unit for 10 days for stoma care and is at present in the medicine general ward for further evaluation of extrapulmonary tuberculosis. 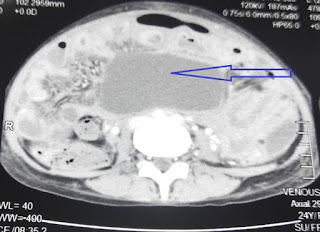 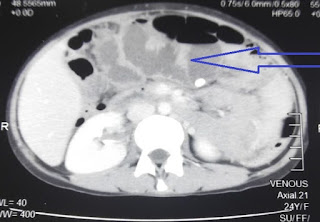 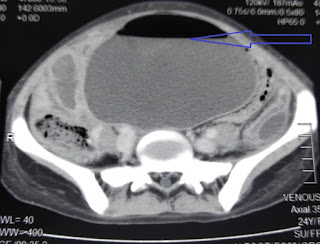 Tuberculosis remains as an important cause of morbidity and mortality in the developing countries and it is often difficult to differentiate extra pulmonary TB from malignancy and Crohn’s disease. The most common site of involvement in extra pulmonary TB is the ileocecal region.[1] The reason for ileocecal involvement is the increased physiological stasis and fluid absorption and reduced digestive activity, and also the abundance of lymphoid tissue in this segment of the intestine (Peyer’s patches).[2] Symptoms of abdominal TB include abdominal distension, chronic abdominal pain fever, night sweats, loss of appetite, rapid and significant weight loss. Viscous perforation due to tuberculosis is very rare and occurs most commonly in immunocompromised individuals. In cases of intestinal perforation, the number of lesions and the depth of invasion determine the line of management. The most commonly affected areas in the intestine are the recto sigmoid colon, the appendix, the cecum and the distal ileum.[3, 4] Acute abdomen poses a great diagnostic dilemma in pregnancy as nausea, vomiting and abdominal pain are common in obstetric population and the  expanding uterus dislocates the other intra-abdominal organs. Tuberculous ulcers heal by fibrosis hence perforation leading to peritonitis is rare. Placental abruption is characterized by a triad of vaginal bleeding, abdominal and pelvic pain and uterine hypertonia. In our case, the perforation that occurred in the antenatal period remain undiagnosed, the resultant peritonitis subsequent to the perforation lead to peritoneal irritation due to which the patient presented with abdominal pain and generalized tenderness and guarding which got misdiagnosed as a case of suspected placental abruption as the gravid uterus seemed to be tonically contracted. Her fetal loss was the consequence of the perforative peritonitis. There are obstetric and non –obstetric causes of acute abdominal pain in pregnancy such as appendicitis, cholecystitis, urolithiasis, perforation, torsion, abruption and others. Laparotomy is gold standard for diagnosis of perforation but ultrasonography with an erect x-ray is sufficient to give enough clues in a pregnant state. Omental patch closure, simple closure, resection and anastomosis, loop ileostomy are the various operative interventions performed to manage perforations. Increased vigilance should be afforded to the pregnant population presenting with constitutional symptoms such as drastic weight loss, malaise and night sweats. High degree of suspicion with a broad outlook is required to identify the non-obstetric causes of acute abdomen as the diagnosis can get easily confounded by other obstetric emergencies such as abruption, preterm labor, ovarian torsion, or uterine rupture. With early multidisciplinary team involvement and holistic approach medical cure rates and prognosis is excellent in extrapulmonary tuberculosis in pregnancy.