Striae distensae is a condition characterized by scarring of the dermis seen as violaceous, erythematous or hypopigmented linear striations on the skin. It is called as striae gravidarum when it occurs secondary to a pregnancy. A curious case of striae distensae of the abdomen which developed 15 days after surgical removal of a first trimester tubal ectopic pregnancy is presented.

A 23 years old woman, gravida 2 para 1, presented with 1.5 months of amenorrhea and acute pain in  left iliac fossa for 2 hours. She past menstrual cycles had been regular, every 28-30 days, with flow for 3-4 days. She had a normal vaginal delivery. Her past medical and surgical history were not contributory. Her vital parameters were within normal limits. There was no abnormality on her general and systemic examination. Abdominal examination showed no scars or striae. Mild tenderness was present in the left iliac fossa. Speculum examination showed normal vagina and cervix. Bimanual pelvic examination showed tenderness in left fornix and on transverse movement of the cervix to the left. The uterus was retroverted, normal sized, smooth firm and mobile. No pelvic masses was palpable. A pregnancy test on her urine was positive. A pelvic ultrasonography showed an empty uterus and a 2 cm diameter mass with mixed echoes in the left adnexa. There was no free fluid in the abdomen or pelvis. A diagnosis of an unruptured left tubal ectopic pregnancy was made. A laparotomy was performed and an unruptured left tubal ectopic pregnancy was removed by partial salpingectomy. She made an uneventful recovery. Histopathological examination of the mass confirmed the diagnosis of a tubal ectopic pregnancy.
She presented after 15 days with a complaint of hypertrophic striae much more on the left side of the lower abdomen than on the right side. There was no itching sensation over the striae. Examination of the abdomen showed hypertrophic reddish-white striae on the left side of the midline below the umbilicus, up to the left flank. She had not ingested any glucocorticoids. She had not put on any weight. There was no family history of such striae. There was no clinical or laboratory evidence of Cushing’s disease. She had not participated in any exercise program, which could have lead to muscular hypertrophy. A dermatologic reference was done. A diagnosis of hypertrophic striae distensae was made, and confirmed by a biopsy. She was given topical steroid cream for local application, with which the striae disappeared in 2 months. She became pregnant without any treatment after 2 more months. Her antenatal course was uneventful. She did not develop any abdominal striae in that pregnancy. She delivered uneventfully at term and had a normal puerperium, without appearance of any striae at any time during the pregnancy and puerperium. 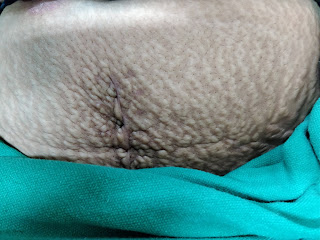 Up to 90% of gravidas develop striae gravidarum.[2] Striae gravidarum usually appear after 24th week of pregnancy. They are most commonly found on the abdomen, and less often on breasts, buttocks, and thighs. They may be due to a mechanical stretching of the skin due to weight gain of pregnancy and abdominal distension by the gravid uterus, along with hormonal changes. [2,3,4,5] Risk factors for development of severe striae gravidarum include ethnicity (more often in non-Caucasian women), family history, and young maternal age. There is an increased expression of glucocorticoid and androgen receptors and decreased expression of estrogen receptors in the dermis.[6, 7] An elevation in serum cortisol levels increases protein catabolism and alters collagen and elastic fibers.[8,9] Lower levels of serum relaxin may cause development of striae.[10] Differential diagnosis of striae distensae includes linear focal elastosis and anetoderma.[11,12] These conditions were ruled out by performing a biopsy of the skin lesions in the case presented.

The case presented here was unique in many respects. The patient had no family and past history of development of striae gravidarum. She did not develop striae even when she had a pregnancy in the fallopian tube. The striae developed 15 days after the ectopic pregnancy was removed surgically, at which time the hormonal influences would have been lost. Even if one considers the possibility that the hormonal changes due to the ectopic pregnancy caused the appearance of the striae, the gestational age was much less than 24 weeks after which the striae usually develop. Furthermore, development of striae has not been reported with first trimester ectopic pregnancy in the world literature. The striae were not bilateral and symmetrical, but much more on the left side than the right side. The striae responded to topical glucocorticoids. The patient did not develop any striae throughout her subsequent intrauterine pregnancy.