Uterine rupture is a dreaded complication in obstetrics with a high incidence of maternal and fetal morbidity and mortality. The prevalence of uterine rupture ranges from 1 in 2,000 to 1 in 200 deliveries. Full thickness uterine rupture of posterior wall with an intact previous cesarean scar is a very rare event.

Uterine rupture is defined as giving away or disruption of full wall thickness of the uterus. It could be primary (in an unscarred uterus) or secondary (associated with a prior myometrial scar, injury, or cavity anomaly). History of prior curettages, trauma to uterus either blunt or sharp, are some risk factors may account to primary uterine rupture.
Oxytocic induced hyperstimulation of the uterus, intra amniotic saline or prostaglandin instillation, perforation by intrauterine pressure catheter, version procedures or over distension of the uterus due to a big baby, polyhydramnios, multifetal pregnancy can also account for rupture uterus.[1] We present an unusual case of a 38 year old female with posterior wall rupture of uterus whose previous LSCS scar remained intact during labor.

Our patient, 38 years, married for 18 years, gravida 4, para 3, living issues 3, previous lower segment cesarean section 15 years back followed by 2 successful vaginal birth after cesarean sections, was referred from a peripheral hospital with present pregnancy complicated with intra-uterine fetal demise at 32-33 weeks (poor by dates) for further management. She had three female children of ages 15 years, 13 years and 11 years, the first being born by cesarean delivery for meconium stained amnionic fluid, and the other two by successful VBACs. Birth weights of all three babies were above 2.5 kg. There was no history of prior curettage or intrauterine manipulations or surgeries or use of an intrauterine device for spacing births. The high risks were that she had a previous LSCS scar that was 15 years old and present pregnancy was an intra-uterine fetal demise with baby in podalic presentation.
On examination at admission, her general condition was fair, well oriented to time, place and person, afebrile. Vital parameters were stable, there was no pallor, icterus, cyanosis, or clubbing. Systemic examination was normal. On per abdomen examination uterus was 32 weeks in size, fetus was a frank breech in the podalic presentation. Fetal hearts were not heard on hand held doppler. Uterus was relaxed, Pfannensteil scar was present, and no scar tenderness could be elicited. On vaginal examination cervical os was 1.5 cm dilated, poorly effaced, cervix was tubular and there was no evidence of any show or leak.
Considering her as a case of previous LSCS; a scarred uterus; a contraindication to use of prostaglandins as method of induction, decision to do mechanical pre induction cervical ripening prior to induction of labor by Foleys’ catheter was made after tracing her routine investigations and coagulation profile which were within normal limits.
Her investigation reports on admission had a hemoglobin of 12.1 gm%, leucocytes count of 11300 cells per cumm, platelet count was 4.0 lakhs per cumm, BUN was 5.9 mg/dL, serum creatinine was 0.9 mg/dL, liver enzymes were 16.0 U/L (SGOT) and 14.0 U/L (SGPT). Serum sodium, potassium, and chloride were 135.0 mEq/L, 3.5 mEq/L and 103.0 mEq/L respectively. Her coagulation profile was normal with PT being 14.1 secs for test and 13.3 secs for control with an INR of 1.01. Her aPTT was 27 secs for test and 26 secs for control, and plasma fibrinogen was 154 mg/dL.
Foleys catheter was introduced in the extra amniotic space just above the internal os under aseptic precautions. It spontaneously expelled out in three hours. After about two hours of expulsion of Foleys’ catheter, she complained of shortness of breath. General condition of the mother was moderate, she appeared pale, her pulse was 136 beats per minute, feeble and blood pressure was 90/60 mm Hg. On abdominal examination, there was generalized abdominal tenderness, the smooth contour of the uterus was lost. Uterine bulge was approximately 34 weeks in size. Fetal parts were felt distinctly per abdomen above the umbilicus. Uterine contractions also subsided. Mild bleeding was present on per speculum examination. On per vaginal examination she was 3 cm dilated, poorly effaced, loose hanging cervix was felt and there was recession of the fetal presenting part. She complained of intense shoulder and inter-scapular pain. One unit of blood was arranged and she was immediately taken up for an emergency exploratory laparotomy in view of suspected scar rupture. Intraoperatively, there was approximately 2 liters of hemoperitoneum and baby with placenta were found freely lying in the peritoneal cavity. A 1.672 kg female macerated fetus was removed from the peritoneal cavity along with the placenta. She had a full thickness longitudinal complete uterine rupture of about 7 cm in the posterior wall of the uterus extending from the fundus to just above the cervix. The previous LSCS scar was intact, cervix appeared healthy. Immediate decision for subtotal obstetric hysterectomy was taken in view of full thickness posterior uterine rupture. Decision for subtotal hysterectomy was taking considering the emergent nature of the situation, faster removal of specimen and hemorrhage control was already achieved as cervix was intact.
She was transfused one unit packed red cells to correct hypovolemic shock. She arrested on table and CPCR was started. She was shifted to Anesthesia ICU and CPCR was continued. But she could not be revived even after vigorous efforts and was declared dead after two hours.
Histopathological examination of the specimen showed normal uterine decidua and myometrium at rupture site, no histological abnormality was detected. 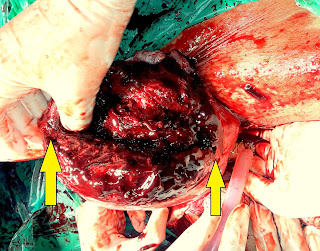 Figure 1. The extent of the uterine rupture seen between the two arrows. 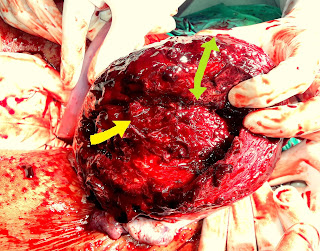 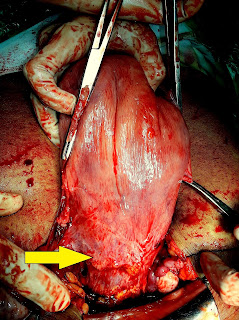 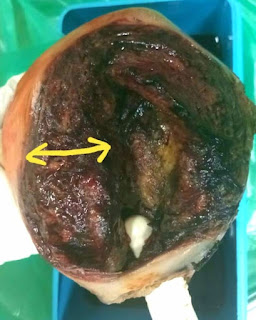 Any breach in the continuity of all the uterine layers (endometrium, myometrium and serosa) any time beyond 28 weeks of pregnancy is called rupture of the uterus.[3] In developed country the estimate of primary rupture approximates 1 in 10,000 to 15,000 births.[4,5] Risk factors are increased parity, non-judicious use of oxytocic’s and prostaglandins in labor. Primary uterine rupture has been seen in a number of women in whom labor induction was done with prostaglandin E1.
Among uterine rupture cases, cases have been reported on posterior rupture of uterus in previous LSCS scarred uterus during a VBAC like that of Wang P et al.[6] This case was very similar  to our case. Posterior longitudinal rupture of previous LSCS scarred uterus with an intact LSCS scar is a rare incident.
In present case multi-parity and previous history of LSCS became a predisposing factor for spontaneous rupture. Again, IUFD in the current pregnancy and baby in podalic presentation could be other factors for uterine rupture. The only intervention that was done in our case was insertion of the Foley’s catheter with distention of its bulb to 30 cc by saline for cervical ripening. Cases have been reported regarding uterine rupture with oxytocin augmentation. Thus, while augmenting labor in a patient we should always keep this complication in mind even if the patient has no history of previous cesarean section or myomectomy.
Apart from the cause, the site and extent of rupture are also to be noted. Rupture of unscarred uterus during labor commonly results from a thinned out lower segment. When the rent is in the immediate vicinity of the cervix, it frequently extends transversely or obliquely.
A broad ligament tear is usually longitudinal. Although these tears more commonly develop in the lower segment, upward extension into the uterine body or downward extension involving the cervix and the vagina have also been reported. In our case the rupture was in the middle of the posterior uterine wall, longitudinal from the top of the upper segment up to the cervical internal os. This was unusual according to above literature.
The most common sign of uterine rupture is a non-reassuring fetal heart rate pattern tachycardia followed by fetal bradycardia. However, in our case this important parameter could not be monitored as it was a case of intra uterine fetal demise.
The various phases of rupture are:
• Feeling of something giving way at the height of uterine contraction.
• Sudden cessation of uterine contractions.
• General examination reveals features of exhaustion and shock.
• Abdominal examination reveals superficial fetal parts, absence of FHS, absence of uterine contour and two separate swellings, one contracted uterus and the other the fetal ovoid.
• Vaginal examination reveals recession of the presenting part and varying degrees of bleeding. In our patient the findings on examinations were similar.

This incidence of complete uterine rupture along the posterior wall with an intact previous cesarean scar is a rare and unfortunate event, the cause of which is still unknown. Rupture uterus as a cause of maternal mortality should be kept in mind while dealing with any patient in labor, especially when she has a history of a uterine scar.
It is a dreaded complication of scarred uterus, but also should not be forgotten in women with previous normal vaginal deliveries. Gynecologists should always keep this complication in mind, and be cautious with rampant use of oxytocic’s and prostaglandins in active laboring mothers. As in our country the multiparous women are delivered at home by the trained nurses and dais, so they should be taught to detect an impending uterine rupture and refer the patients timely. Institutional deliveries should always be encouraged.
The various case scenarios mentioned in the case report are examples of posterior wall ruptures in unscarred uterus, but in our case, cause of uterine rupture is not mentioned as it is unknown, hence justification for cause of rupture cannot be given.