A 30 year old unmarried woman came to our hospital with a huge recurrent abdominopelvic mass. Ultrasonography showed a huge cyst of 23.3 × 18.6 × 15.6 cm in dimension without neovascularization. Serum CA125 and CA19-9 levels were 80.4 and 391 IU/ml, respectively. She had also previously undergone a laparoscopic endometrioma cyst excision 1 year back. Pathologic examination revealed an endometrioma. The cyst fluid was chocolate brown colored and  measured 4,150 ml .

Pelvic endometriosis usually involves the ovaries, and bilateral involvement occurs in one third to one half number of cases.[1] Ovarian endometrioma rarely exceeds 10 – 15 cm in diameter.[2] About 0.7 % to 1.0 % of patients with endometriotic lesions undergo malignant transformation.[3] If size of the ovarian cyst exceeds 10 cm, malignancy is to be suspected.[3] Larger endometriomas which are more than 15 cm in size are more likely to have a neoplasia, but in general, it is not a rule.[3]
Serum CA 125 is a tumor marker commonly elevated in cases of endometriomas;  however, levels above 100 IU/ ml are rare.[4] A definite diagnosis is made only by pathological examination.
Here we present a case of recurrent ovarian endometrioma in an unmarried female with the largest diameter of 23 cm on ultrasonography manages laparoscopically.

A 30 yr old unmarried woman came to our out patient department with an abdominopelvic mass of about 32 weeks in size. She had mild abdominal pain in the lumbar region associated with nausea. She was previously also operated laparoscopically for an endometrioma. She had regular menstrual cycles with flow lasting for 3-4 days that were relatively painless.
On per vaginal and bimanual examination, a cystic mass, abdominopelvic in origin, movable mass with regular surface was palpated. It was about 36 weeks in size. In ultrasonographic examination, there was a septated cystic mass; 23.3 × 18.6 × 15.6 cm in dimension. Neovascularization was not determined on Doppler. Serum CA125 and CA19-9 levels were 80.4 and 391 IU/ml, respectively.
Operative laparoscopy was performed where cyst was punctured and 4150 ml of chocolate brown colored endometriotic fluid was aspirated. A biopsy of the cyst wall (figure 4) confirmed the diagnosis of endometrioma. 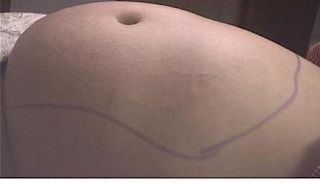 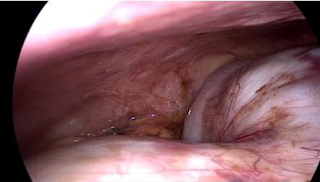 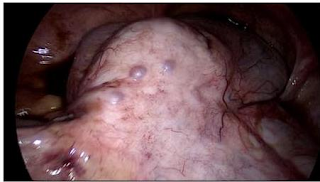 Figure 3. During drainage of endometrioma 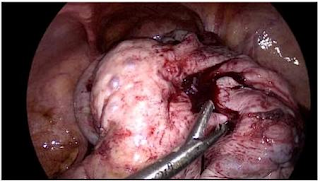 Figure 4. Biopsy of the cyst wall.. 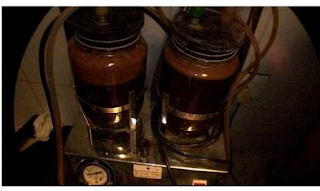 “Presence of endometrial tissue outside the uterine cavity” is defined as endometriosis. It generally affects the ovaries, cul de sac, broad ligaments and uterosacral ligaments. Although it commonly presents in the pelvic region, endometriosis can also be seen at distant sites such as, lungs, colon, brain, ileum and subcutaneous tissue.[5] Definite diagnosis is confirmed only by histopathological examination. Serum CA 125 levels usually rise up in endometriosis, but rarely exceed 100 U/ml. Moreover serum CA 125 levels rise above 35 U/ml in more than 80% of patients with epithelial ovarian tumors.[6] We presented this case because of its rarity. Only a few cases of such huge size and recurrent, have been reported previously. Thus, endometrioma must be in a differential diagnosis even in cases with large adnexal masses.